Déjà vu: Alaska Airlines Flight evacuated in Seattle due to a Samsung Galaxy A21 Smartphone Fire 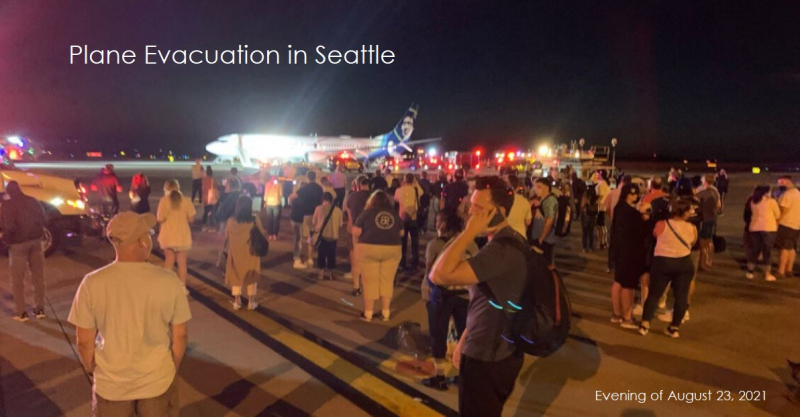 From August 31 through to October 2016 Patently Apple posted a string of reports regarding Samsung's Galaxy Note 7 smartphones exploding while charging (01, 02, 03, 04, 05 and 06) which led to this model of phone being banned by Airlines and Samsung eventually recalling that model from the market. It was a disaster for Samsung.

Yesterday a flight to Seattle was evacuated after a passenger's Samsung Galaxy A21 caught on fire which must have Samsung executives scrambling for details.

The Seattle Times reported that "A passenger’s cellphone caught on fire inside the cabin of an Alaska Airlines flight from New Orleans to Seattle that had landed at Seattle-Tacoma International Airport Monday evening.

It was a Samsung Galaxy A21, according to Perry Cooper, a spokesman for the Port of Seattle.

“After much digging, I can tell you that the phone was burned beyond recognition,” Cooper said in an email. “However, during an interview with one of our Port of Seattle Police officers, the passenger volunteered the phone was a Samsung Galaxy A21.

The crew on Flight 751 extinguished the fire with a battery containment bag, but smoke forced the deployment of evacuation slides, a spokesperson for Alaska Airlines told KOMO-TV.

One passenger sent a video into KIRO7Seattle News via Twitter as presented below.

Passenger sent @KIRO7Seattle this video following the plane evacuation. Per @flySEA: “Passengers were transported by bus to the terminal, some with minor injuries.” Passenger credits flight attendants for acting fast throughout the entire incident. pic.twitter.com/y0UGMVP73w

The Samsung Galaxy A21 was introduced back in April 2020 and shipped in May along with a series of other A-Series phones. This is the first known major incident with the A21 model. Samsung is likely to downplay this as a one-time incident and only time will tell if that's the case.