Home Archives Contact Us Subscribe Twitter Facebook Patently Mobile
Samsung Electronics Vice Chairman Lee Jae-yong will be paroled on Friday, though there could be a hurdle or two to pass later this year
Apple has Won its 15th Granted Patent for a future Entry-Level Headset for iTunes, Movies, TV shows, Games & Apps 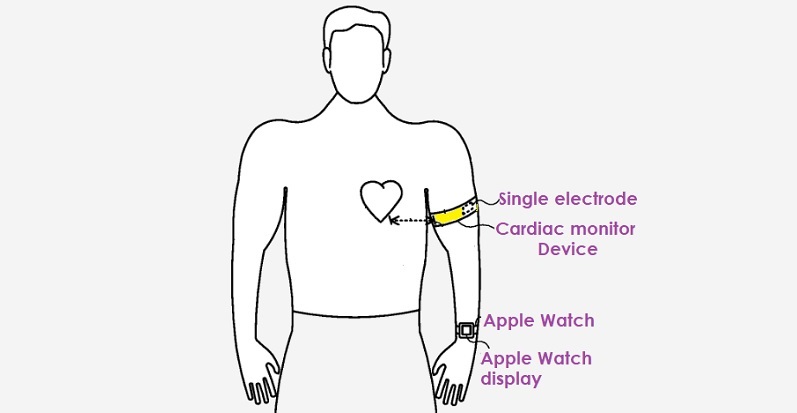 Today the U.S. Patent and Trademark Office officially granted Apple a patent that relates to portable electrocardiogram devices. More specifically, described embodiments can relate to portable electrocardiogram devices that are wearable and can include an antenna. The patent describes an Apple Watch working in concert with a specialized armband accessory. Due to Apple's original patent filing date, it's unknown whether Apple's granted patent is describing a future armband device to work with Apple Watch to perform a superior cardiac monitoring system in the future or is a system that Apple has passed on.

Conventional electrocardiogram monitor devices require at least two electrodes to be in physical contact with a user to complete a circuit in order to monitor the electrical activities of the heart of the user. One electrode is often required to be attached near the heart of the user to detect the electric field of the heart. Such arrangement often requires the user to maintain a certain posture. Hence, it can be difficult to continuously conduct electrocardiogram monitoring in a prolonged period because the movement of the user can be severely limited.

Since the cardiac monitor device can detect the electric field of the heart with a single physical contact point, the antenna and the electrode can be carried by a single housing. For example, in one case, a small consumer electronic device can include a housing that carries both the antenna, the electrode and circuitry that connects the two components.

In another example, the cardiac monitor device can be a component that is part of a smart watch. Since a single device that is wearable by a user can be used to monitor the electric field of a heart, the electrical activities of the heart can be monitored continuously in a prolonged period, such as in days or even in months. 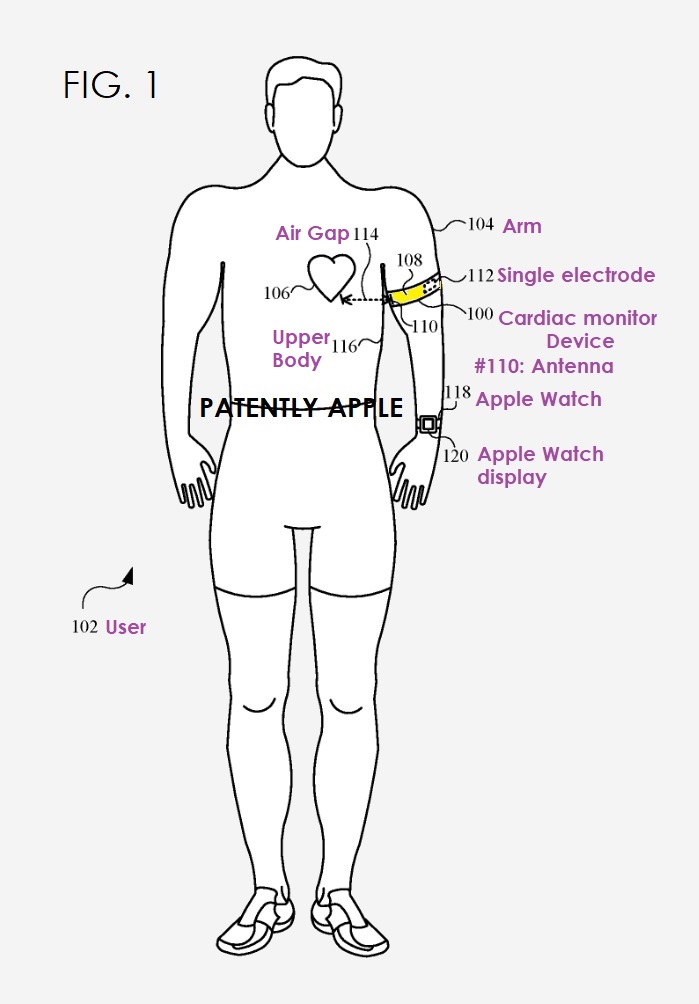 Apple's patent FIG. 2 below is a system schematic box diagram of a system for displaying real time cardiac information of a user. Cardiac monitor device #100 can include a detection circuitry (#124) that can include an antenna (#110) and an electrode (#112). The electrode that can directly measure a first electrical potential of the user at limb (left arm #104). The Antenna can form a capacitor (#126) with heart (#106) through capacitive coupling.

The cardiac monitor device (Armband #100) can optionally include an analog-to-digital convertor capable of digitalizing the potential difference before the signals are transmitted or stored in a memory as digitized data. The cardiac monitor device can include an output that can transmit signals carrying information of the potential difference to an external circuit. The output can take various forms. In one case, the output can be a transceiver (#128). 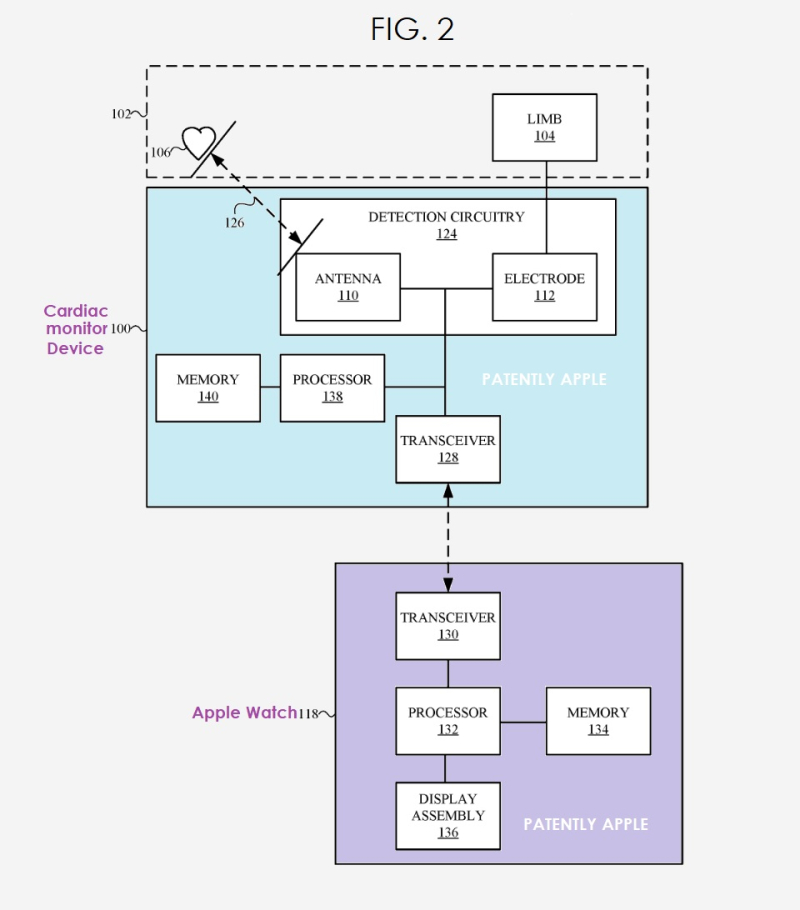 Apple's patent FIG. 9 below is a flowchart depicting a method 900 for monitoring cardiac information of a person. 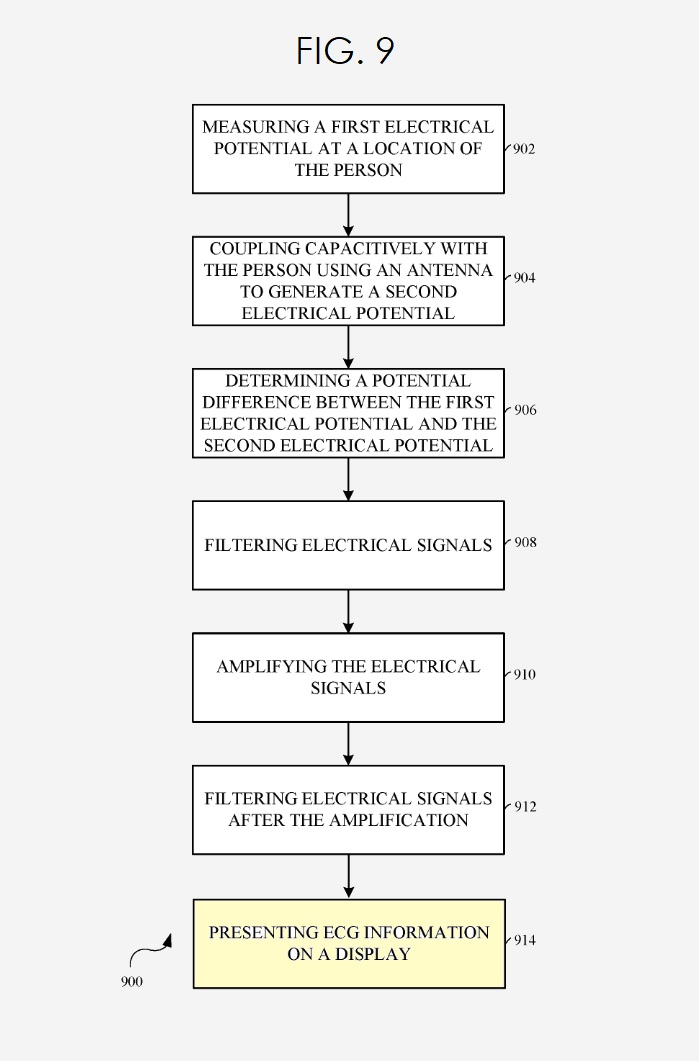 For more details, review Apple's granted patent 11,083,383. Apple filed for this patent in September 2018. Apple Watch with ECG was introduced in December 2018. This would suggest that today's granted patent was a follow-up invention to Apple's ECG invention that went to market three months after this filing. Why file this invention if they already knew that their ECG feature for Apple Watch was coming to market months later? Likely because this is a possible future accessory that could provide some users with more complicated heart conditions with a superior cardiac monitoring system.