Although there's been a setback with an Apple Stores closing due to a rise in COVID-19 outbreaks, instore classes not resuming as planned, and their back to work schedule being delayed until January 2022, Apple is on record having stepped up its hiring in the last few months providing a significant staff boost to its retail stores and new product development, according to research by GlobalData.

GlobalData's Job Analytics database reveals that Apple’s job postings increased by 78% in July 2021, when compared to July 2020, and over 370 of these listings related to ‘Apple Retail’.

Interestingly, Apple has also increased job listings that refer to ‘new products’, from 130 jobs in March 2021 to over 270 job postings in July 2021. 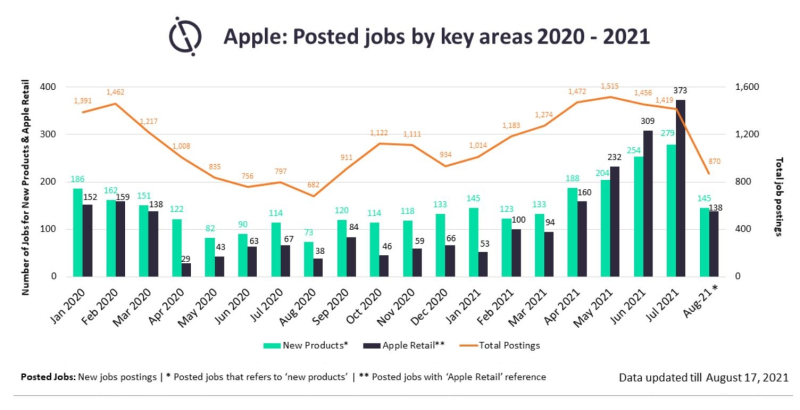 GlobalData's Senior Analyst for Consumer Services, Platforms and Devices, Anisha Bhatia: "Apple grows its market share in regions where it expands its retail footprint. The Apple Store is a status symbol, especially in developing countries, bringing together the Apple community in what is known as the Apple experience. Apple has room to grow in regions like India, Africa and the Middle East, and its focus on expanding its retail imprint in those markets will help reap market share rewards for the company."

GlobalData's Business Fundamentals Analyst Ajay Thalluri: "Apple is creating new products across various divisions, notably for the newly formed ‘Home Services’ team as it looks to innovate and craft new services using emerging technologies for the home market through hardware, software and services. The company recently advertised a role for a ‘Product Manager, Home Services’, the advert for which noted the candidate must have direct working experience with key ecosystem players, including home services providers, builders and technology providers.

Further, Apple is expanding its product and service portfolio while readying to launch its popular iPhone devices, along with other products. The company reopened most of its stores in 2021, which led to an elevated need for new hires who will be responsible for helping customers set-up their devices."

‘Specialist: Full Time and Part-Time’ roles increased from 94 jobs in May 2021 to 160 in July 2021, with jobs located in the US, China, the UK, Canada, Australia, Thailand, and the UAE. The company is also holding employment events in colleges and universities under the campaign title ‘Join Us. Be You.’ The contracts, which could last up to five months, are to staff retail stores in the US and Canada.