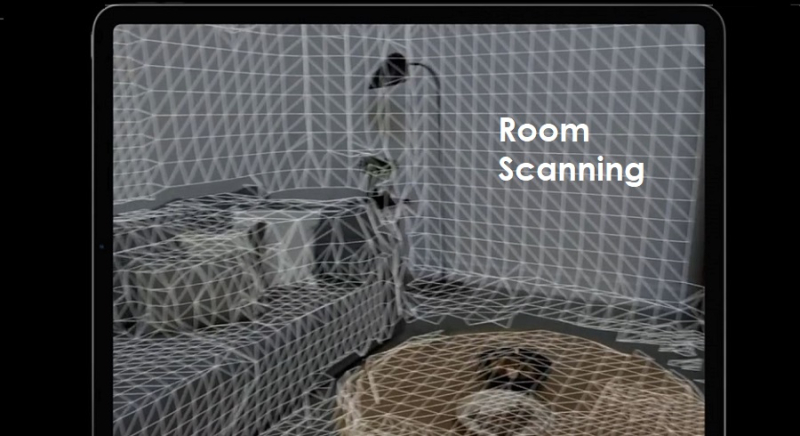 Today the US Patent & Trademark Office published a patent application from Apple that generally relates to generating two-dimensional and three-dimensional geometric representations of physical environments, and in particular, to systems, methods, and devices that generate geometric representations based on information detected in physical environments.

The technology relates to Apple's ARKit. Below is a snippet from a WWDC presentation that at one point touches on the topic of "Scene Geometry" covering LiDAR scanning using the iPad Pro. It covers subject matter relevant to today's three new patent applications.

Apple notes in their patent background that floorplans play an important role in designing, understanding, and remodeling indoor spaces. Floorplans are generally effective in conveying geometric and semantic information of a physical environment. For instance, a user may view a floorplan to quickly identify room extents, wall structures and corners, the locations of doors and windows, and object arrangements.

There are numerous hurdles to providing computer-based systems to automatically generate floorplans, room measurements, or object measurements based on sensor data. The sensor data obtained regarding a physical environment (e.g., images and depth data) may be incomplete or insufficient to provide accurate floorplans and measurements. For example, indoor environments often contain an assortment of objects, such as lamps, desks, chairs, etc., that may hide the architectural lines of the room that might otherwise be used to detect edges of a room to build an accurate floorplan. As another example, images and depth data typically lack semantic information and floorplans and measurements generated without such data may lack accuracy.

Existing techniques do not allow for automatic, accurate, and efficient generation of floorplans and measurements using a mobile device, for example, based on a user capturing photos or video or other sensor data while walking about in a room. Moreover, existing techniques may fail to provide sufficiently accurate and efficient floorplans and measurements in real time (e.g., immediate floorplan/measurement during scanning) environments.

According to some implementations, a floorplan is created based on a user performing a room scan, e.g., moving a mobile device to capture images and depth data around the user in a room. Some implementations provide a preview of a preliminary 2D floorplan during the room scanning. For example, as the user walks around a room capturing the sensor data, the user's device may display a preview of a preliminary 2D floorplan that is being generated.

In one example, the preview is generated without certain post processing techniques (e.g., fine-tuning, corner correction, etc.) that are employed to generate the final, post-scan floorplan. In other examples, a live preview may use a less computationally intensive neural network than is used to generate the final, post-scan floorplan. The use of 2D semantic data (e.g., for different layers of the room) may also facilitate making the preview determination sufficiently efficient for live display. 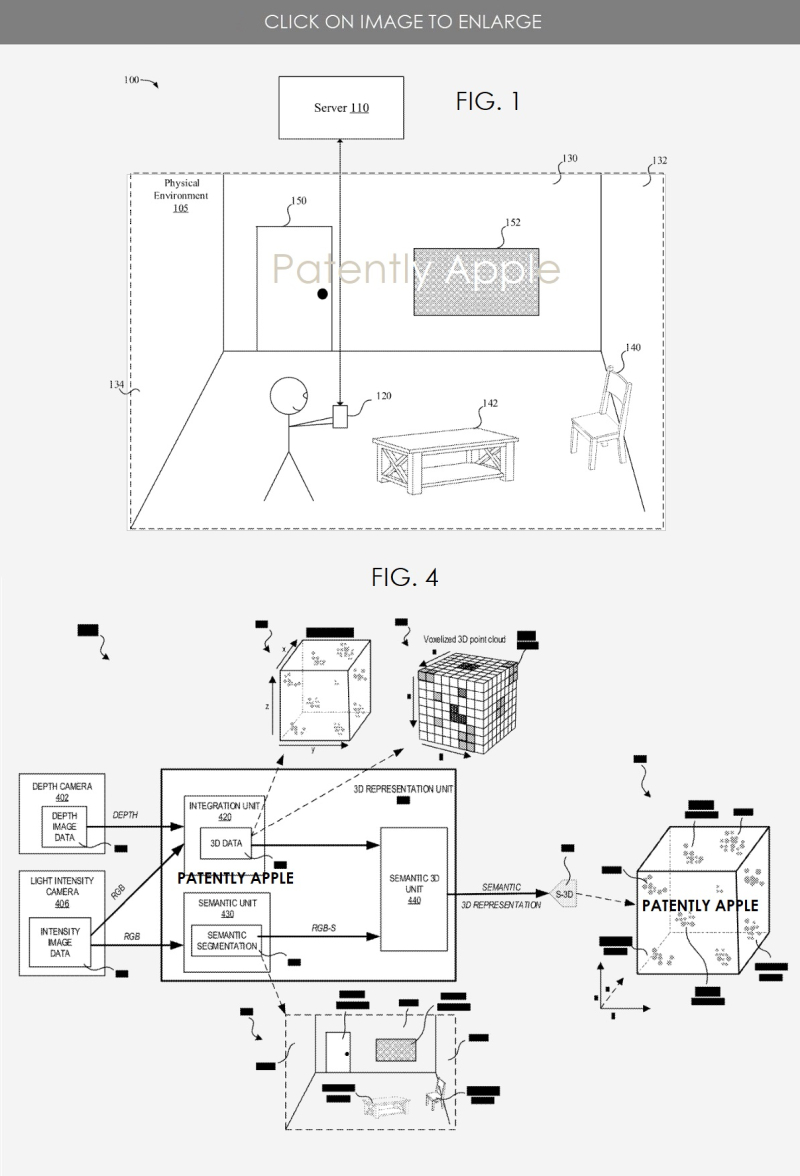 Apple's patent FIG. 4 above presents a system flow diagram of an example generation of a semantic three-dimensional (3D) representation using 3D data and semantic segmentation based on depth and light intensity image information.

The system flow of the example environment #400 above can be displayed on a device that has a screen for displaying images and/or a screen for viewing stereoscopic images such as a head-mounted display (HMD). 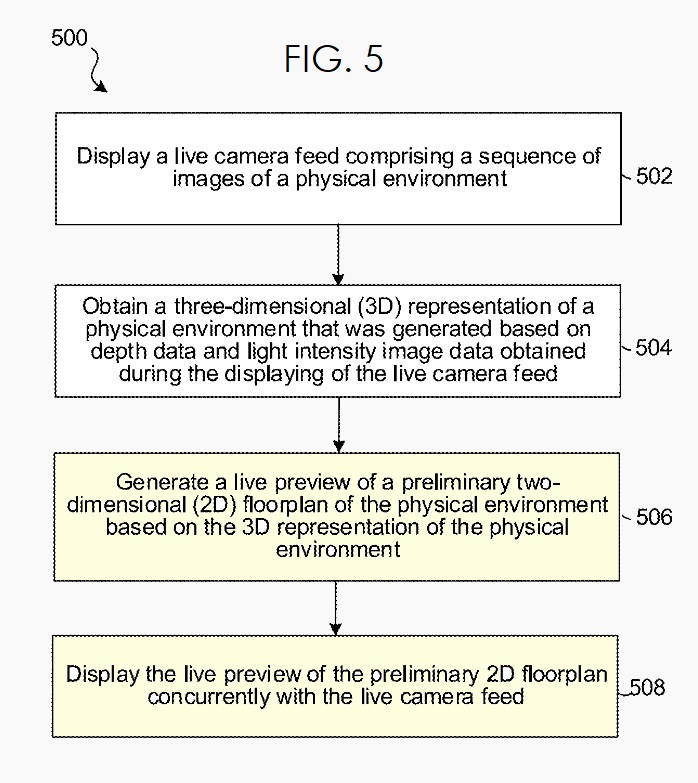 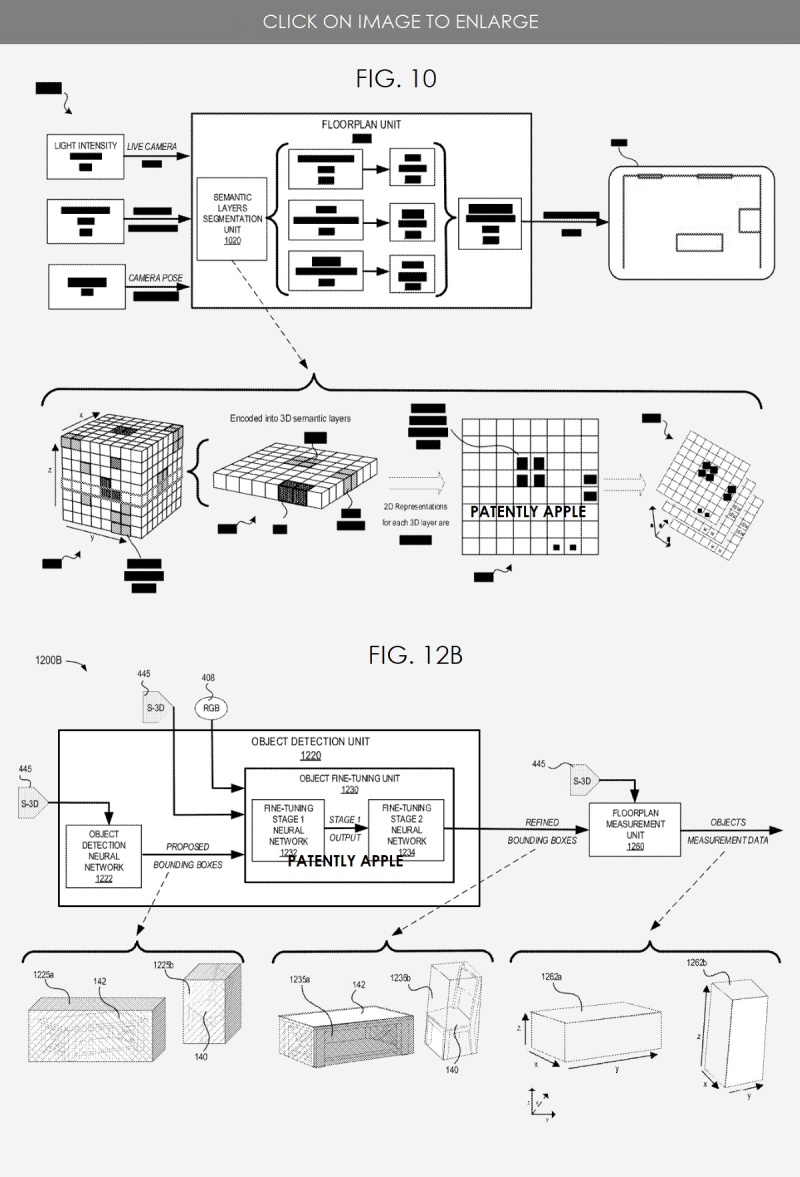 Apple's patent FIG. 12B above is a system flow diagram of an example environment (#1200B) in which an object detection unit (#1220) can generate refined bounding boxes for associated identified objects based on a 3D representation of the physical environment, and a floorplan measurement unit (#1250) can provide measurements of said bounding boxes.

Apple's three patent applications listed below will be better appreciated by ARKit developers: