Home Archives Contact Us Subscribe Twitter MeWe Facebook Patently Mobile
Apple won a series of Eyewear Patents today covering the use of ultrasonic sensors, being able to hail the attention of a user wearing an HMD+
Apple Releases a Trailer for the upcoming Stephen King Limited Series 'Lisey's Story' that debuts on Apple TV+ on June 4 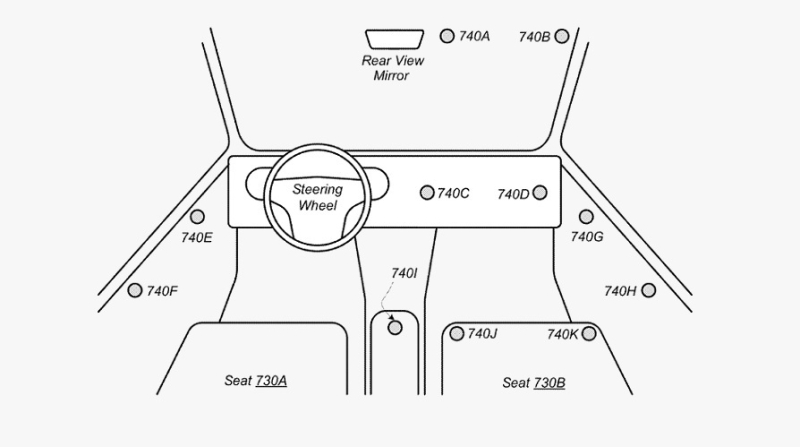 The U.S. Patent and Trademark Office officially published a series of 52 newly granted patents for Apple Inc. today. In this particular report we briefly cover two Project Titan patents regarding Apple's work on autonomous and semi-autonomous vehicles such as Car Keys and finding misplaced devices in a vehicle. The other patent covers a major HomeKit patent aimed at allowing users to control smart home devices in groups. And as always, we wrap up this week's granted patent report with our traditional listing of the remaining granted patents that were issued to Apple today.

Locating Misplaced Devices in a Vehicle

Apple's Find My team has just delivered AirTags to assist users find items that they deem important. Apple's first Project Titan patent in this report covers systems and methods for determining the location of misplaced devices inside a vehicle.

Apple notes that different types of signals may be used with embodiments of the device location system. In some embodiments, electromagnetic or radio signals may be used. For example, a signal generator may emit a pulse of infrared (IR) radiation. The pulse may be detected by an IR sensor. Wireless communication transceivers, such as Wifi or Bluetooth transceivers, are capable of generating and receiving wireless signals in the frequency band assigned according to their communication protocol. These transceivers are also capable of detecting the strength of a signal in their assigned band. Audio signals may also be used. In that case, the signal generator may be a speaker that generates a chirp, and the signal sensor may be a microphone that can detect the chirp.

Embodiments of the device location system may use a plurality of types of signal generators and sensors in combination. In some embodiments, the system may choose the type of signal to use based on the current conditions of the vehicle or certain preset policy. For example, under certain lighting conditions, an IR signal may be difficult to detect and an audio signal may be preferable. In other embodiments, multiple signal types may be used to assist in or confirm a location determination. For example, the vehicle's onboard computer may rely on only Wifi signals to determine an approximate location of a device by default, but turn on other forms of location sensing signals when more precision is needed. 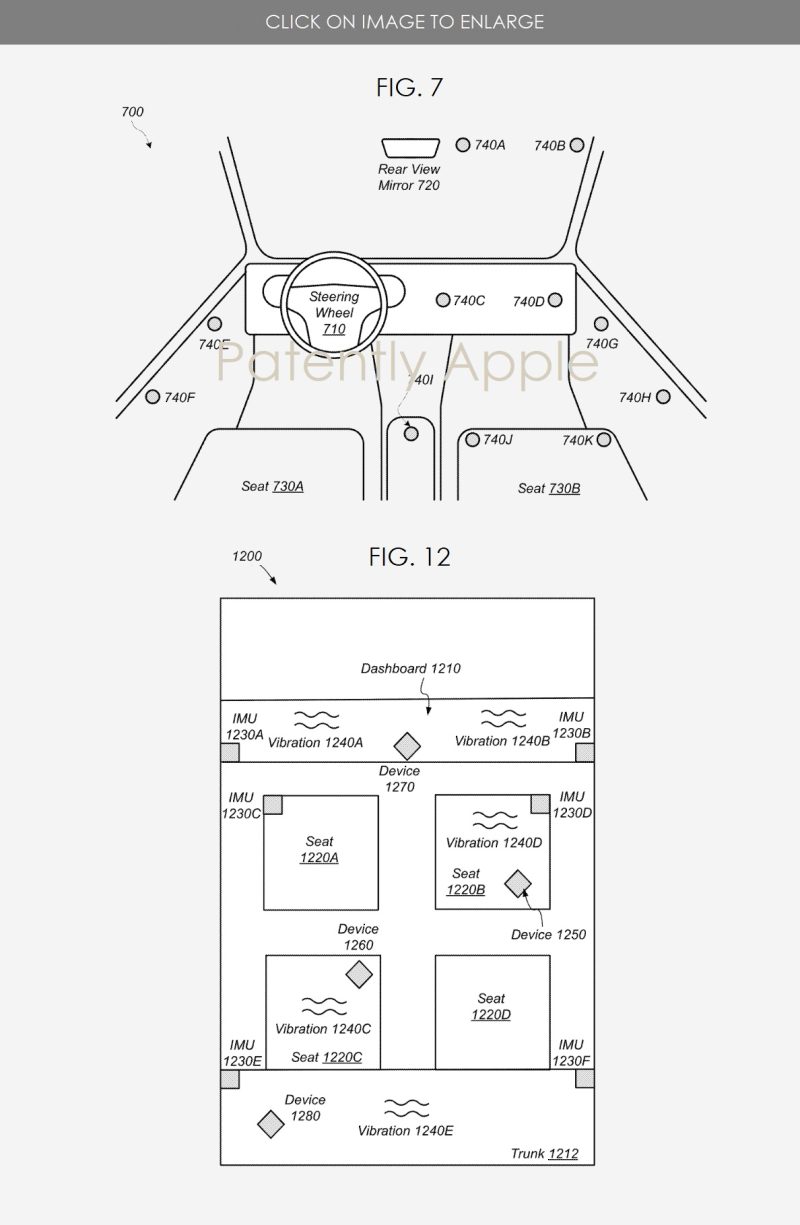 In the example of patent FIG. 1 below, the electronic device #106 is a keyless access device configured for NFC communication. The keyless access device may be a powered device (e.g., battery powered) coupled to a physical lock (e.g., for access to a car, bicycle, house, and the like), and configured to lock and/or unlock the physical lock upon detection of a passive tag (e.g., a key fob or an emulated key fob). 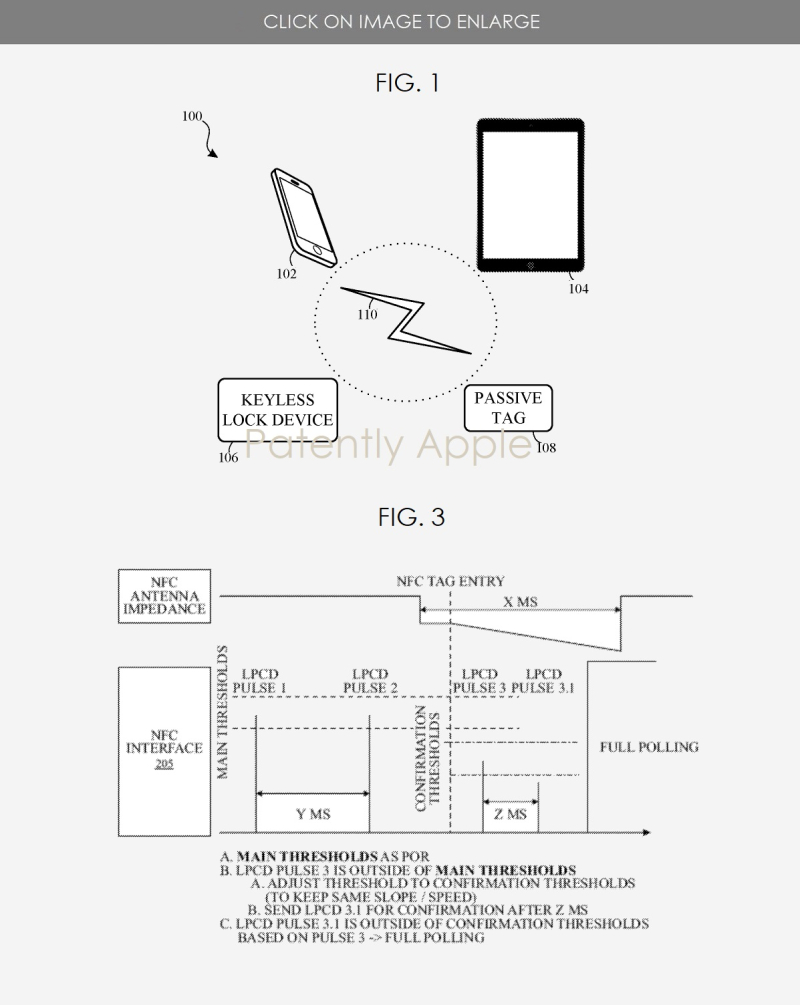 Apple's patent FIG. 3 above illustrates an example timing diagram corresponding to transmitting a confirmation pulse signal to determine whether the detected change in measurement parameters should be attributed to the presence of an NFC device when the NFC device is present.

Apple's granted patent notes that Home automation is becoming more and more popular. Starting with home clothes and dish washing machines years ago to the smart (e.g., computerized) fixtures, appliances, and accessories we have today, more and more people are automating their homes. With the increasing availability of smart accessories and appliances comes more ways to control these smart devices. For example, a software application on a user's mobile device can be configured to control individual accessories, appliances, and/or fixtures in the user's home or office. However, as accessories get smarter, they also provide a more varied feature set which makes controlling these devices more and more complicated for the user. 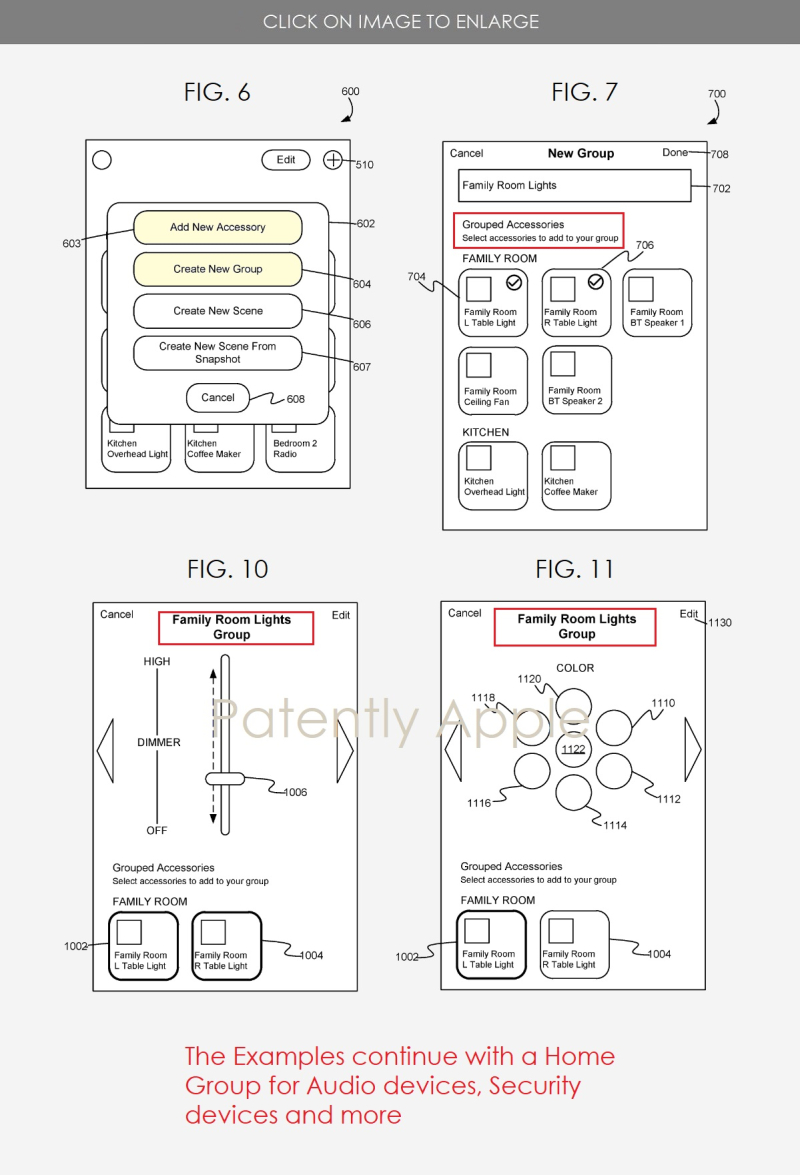 To dive deeper into the details and dozens of patent figures, review granted patent 11,003,147, here.