Home Archives Contact Us Subscribe Twitter MeWe Facebook Patently Mobile
Apple could deliver a Future iPhone and AR Glasses with Insane Screen Resolutions up to 4,000ppi
Samsung and LG to Unveil next-gen Display Technology this week at the SID Event, with Samsung introducing a Tri-Fold for Smartphones+ 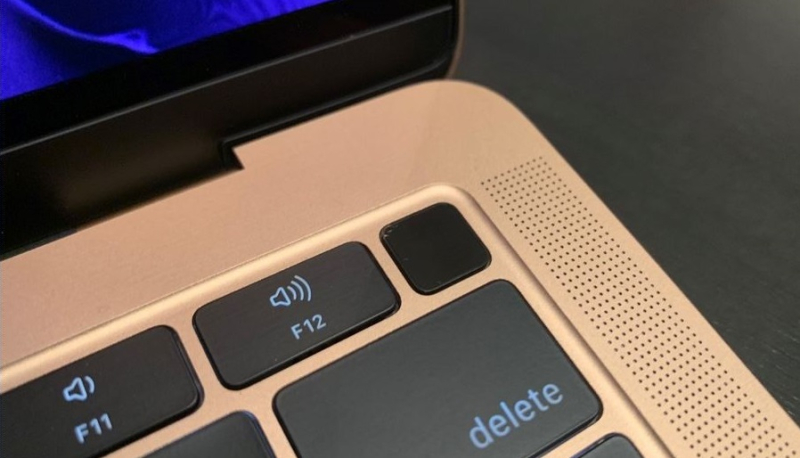 Apple was granted a patent for Touch ID applied to a MacBook back in 2015. The focus of the patent was Touch ID and not the positioning of it which Apple wanted to keep secret until they released it. In October 2016 Apple introduced both Touch ID on a single key along with full Touch Bar.

Current MacBook keyboards offer a Touch ID button in the upper right corner that has a smooth top finish, similar to all of the other keys. This week the US Patent & Trademark Office published a patent application from Apple wherein it notes that future Mac keyboards could have a Touch ID button that stands out from the other keys with a textured ceramic key cover. The textured ceramic cover could have a visual and/or tactile property which differs from that of a conventionally polished ceramic cover.

Apple notes that in some cases, a front surface of the Touch ID cap may have a color, gloss, reflective haze, and/or reflectance. The cap and the textured ceramic cover may each be configured to provide a desired visual and/or tactile property to the biometric key or button without substantially degrading the performance of the biometric sensor.

In some embodiments, one or more textures of the ceramic cover may be configured to provide a matte appearance and/or a relatively low gloss level to the cap. For example, the gloss level of the cap may be lower than that of a polished ceramic cover. The textured ceramic cover is typically light transmissive and may be substantially transparent.

A possible future twist: At one point in the patent filing Apple notes that the ceramic cover of the cap may be suitably thin, such as from 100 microns to 750 microns. In additional embodiments, the biometric data may alternately or additionally include heart rate, blood oxygenation, respiration rate, medial arterial pressure, galvanic skin response, vein patterns, and the like.

Apple's patent FIG 1A below illustrates a MacBook with both a Touch Bar and a Touch ID key; FIG. 1B is an enlargement focused on the Touch ID button; As shown in FIG. 6A, the anti-reflection coating included in the front coating #694 may have a thickness less than an arithmetic mean height (or root mean square height) of surface features defining a texture of the ceramic cover #680. 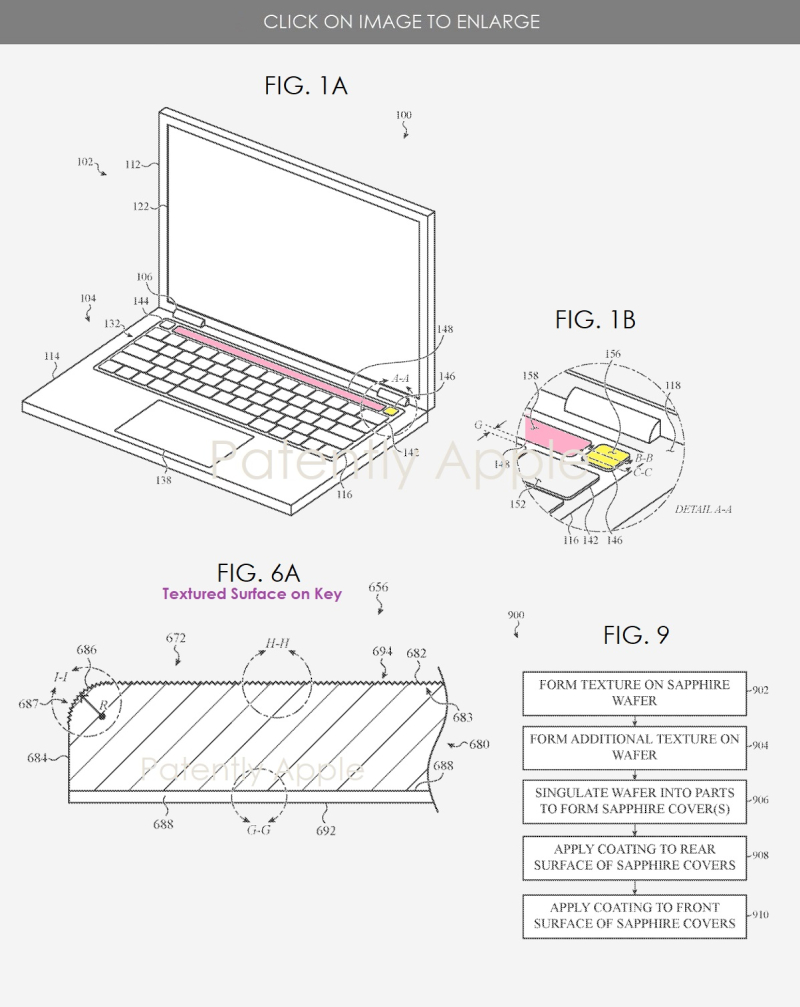 Apple's patent FIG. 9 above shows a flow chart of a process for making a textured cap of a biometric input component (Touch ID button/key).

Apple's patent application number 20210142030 was published on Thursday by the U.S. Patent Office. The patent was originally filed in March 2020.

Considering that this is a patent application, the timing of adding such features to Touch ID on Mac keyboards is unknown at this time.