Intel has launched a Series of Attack Ads against M1 MacBooks 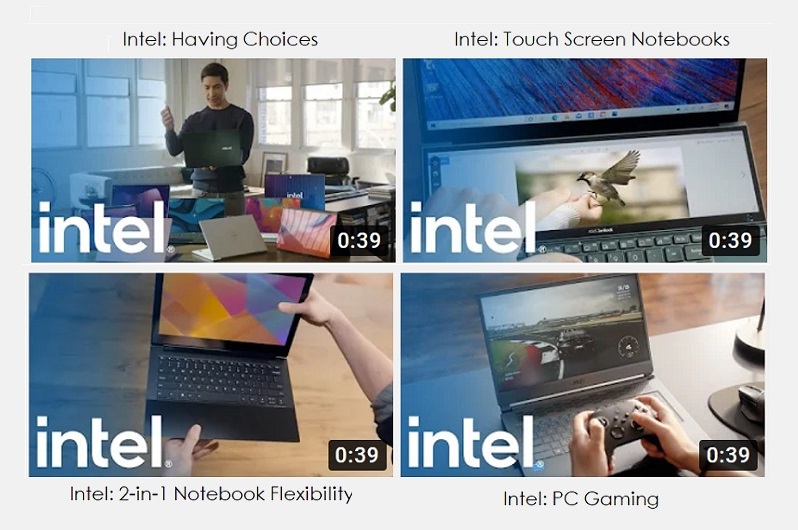 In early February Patently Apple posted a report titled "Intel's new CEO has declared War on MacBooks with the M1 Processor by Publishing a first series of Intel Created Comparison Tests." The report noted that the excitement surrounding MacBooks powered by Apple's the new M1 processor shocked the industry back in November and more importantly, rocked Intel.

One of the very first tasks that Intel's new CEO wanted to tackle was to declare war on Apple's new M1 processor. He and his team published a series of charts attempting to squash the M1. It was a rather surprising move considering that AMD, Nvidia and even Qualcomm are the ones that Intel should be focusing their time on. They're challenging Intel for work stations, servers and mobile devices.

Today, Intel released a battery of new attack ads against the the M1 driven MacBooks.  The ads were well planned out as they hired Justin Long, the one-time "I'm a Mac" guy to become the PC guy mocking Apple's MacBook. Justin who? – you might ask.

Well, Apple mounted a successful ad campaign against Microsoft "Windows" called "Get a Mac" that began in 2006 when Apple made the switch to the Intel processor from the PowerPC. The campaign successfully ran through to 2009. It was Apple's longest theme-based ad campaign in its history and Justin Long played the character called "I'm a Mac."

If you were too young to remember Apple's original ad campaign, then the video below will help you catch up with 66 of the ads running back-to-back.

The fame for playing "I'm a Mac" opened many doors for John Long and you'd think he'd be grateful. Yet in a snippet from a 2019 Larry King Now interview, Long thought that the the ads were inherently arrogant. Wow, what an ungrateful ass#@&!.

Flashing forward to today, we see that Intel decided to use Justin Long in a role reversal playing the PC Guy who now mocks the weaknesses of Apple's M1 MacBooks. Below you'll find Intel's new series of anti-MacBook ads that are likely to hit the airwaves at some point in time.

Justin Gets Real: Having Choices | Intel

Justin Gets Real: 2-in-1 Flexibility | Intel

With Apple planning to advance the M1 Processor in 2021, it looks like Intel's CEO might have to keep this ad campaign going until it becomes too embarrassing to continue.