Today the U.S. Patent and Trademark Office officially granted Apple a patent that relates to drones connected to cellular networks. Three of the inventors are Intel engineers which signals that this could have been a patent acquired from Intel. Back in July 2019 Apple signed an agreement to acquire the majority of Intel's 5G modem business and today's patent may have been a part of what Apple acquired.

Today's granted patent relates to drones connected to cellular networks, successful and reliable handover operations, by which a drone is transferred from a weaker cell to a stronger cell as it travels, leads to safe operation across large areas and enables usages such as remote sensing and package delivery.

Supporting drones on cellular networks, however, is challenging because, while the main radiation lobes of current BS antennas are downward tilted to cover their assigned geographic region, the side lobes antennas point up to the sky.

Also, a drone can see many more BSs compared to a ground UE as has been demonstrated in field tests. The same situation still exists when the BSs employ full-dimensional multi-input multi-output (FD-MIMO) transmission modes.

The gains of the side lobes fluctuate rapidly in a complicated manner over short distances in both the horizontal and vertical directions in three-dimensional (3D) space. This complicates handover operations that are intended to transfer a mobile terminal from a weaker cell to another stronger cell as the mobile terminal moves. Furthermore, in the 3D space, there are certain locations where the coverage quality (SINR) is extremely bad and cannot support control or data links.

Simulations have demonstrated that many handover failures can be seen over a short period of time when typical handover setting for ground UEs are applied to flying drones. Described herein are solutions directed toward solving these handover challenges and improving control/data channel reliability for drones connected to cellular networks.

Apple's patent FIG. 9 below illustrates a three-dimensional space for which an optimum scanning angle has been determined for a particular drone location. 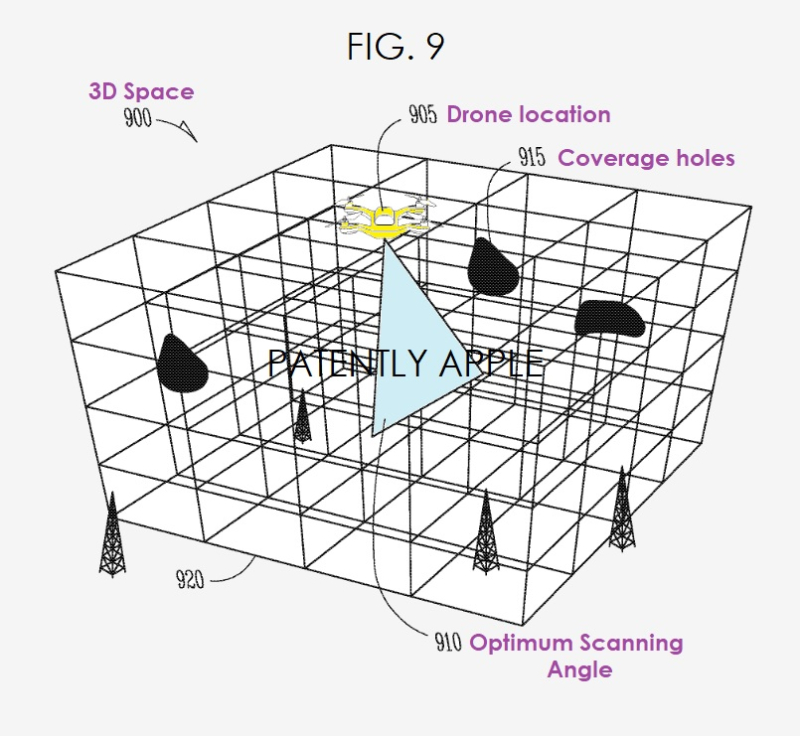 It should be noted that while this is an acquired Intel Patent, Apple has shown some interest in a developing a future drone accessory. Below are two reports on the topic of an Apple Drone.