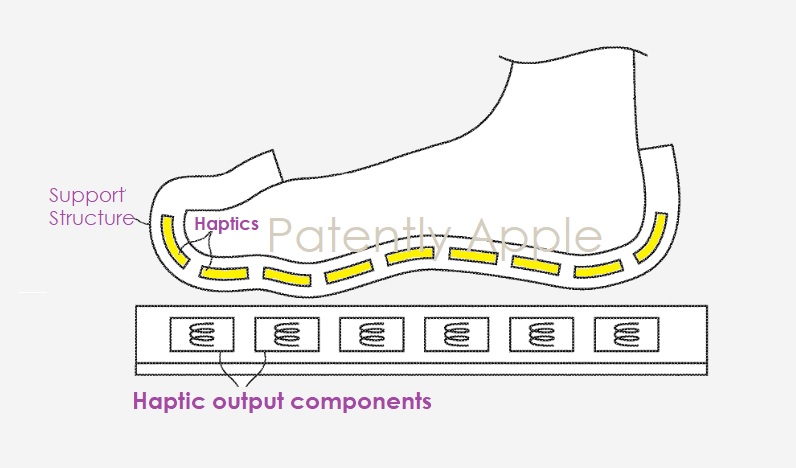 Today the U.S. Patent and Trademark Office officially granted Apple a patent that relates to smart footwear that includes an electromagnetic haptic output system having magnets in a sock or shoe. The new footwear is in context with VR Gaming accessories. The smart shoes or socks could provide users with various sensations on their feet, like hot or cold and much more, making the game evermore real.

In hybrid arrangements, haptic output devices include foot-shaped support structures with components such as magnets and foot-platform components with corresponding electromagnets.

During operation, shear forces and forces normal to the inner surfaces of a foot-shaped support surface and/or the exterior surface of a foot platform may be generated. These forces may provide a user with a sensation of resting or sliding across a tiled surface or other surface with surface irregularities. Friction effects (e.g., resistance to lateral motion) and other effects may also be produced using the haptic output devices.

The Footwear is related to Gaming

Apple's context for the new footwear is gaming. Specifically, Apple notes that during a VR computer-game, the HMD can be coupled to footwear that could supply haptic output that provides a user with a sensation of shear force on the user's feet (e.g., rendering friction, slipping sensations, etc.), that provides the user with a sensation of increased normal force on the foot of the user, and/or other haptic sensations.

The haptic output that is provided may be provided based at least partly on feedback on user foot movement and/or other information that is gathered with motion sensors. The footwear may be used to provide a user with sensations of continuous movement, continuous slipping, and/or other sensations during a game. The socks or shoes may include heating and/or cooling elements, positioners, and/or other input-output devices. These temperature control components may, for example, be located in portion 10' of device #10, as shown in FIG. 9.

Portion 10' may, for example, include one or more heating and/or cooling elements such as Peltier effect devices, resistive heating elements, fans for cooling and/or distributing heat, etc. By adjusting the temperature of one or more regions under a user's foot, the user may be provided with the sensation of walking on different types of materials (e.g., cold tiles, hot sand, etc.). Sensations associated with other surfaces (e.g., standing, walking, and/or sliding on rocks, sand, etc.) may also be rendered, if desired.