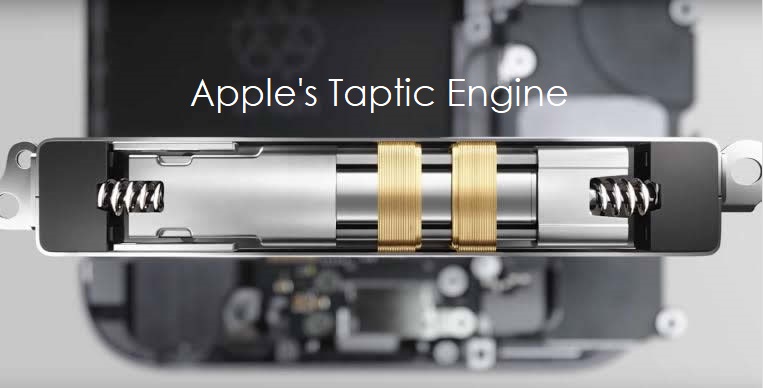 In his latest in-depth review of the iPhone 12 Pro, Marques Brownlee reviews the design, the screen, cameras, MagSafe, the battery, the iPhone, 5G and more. In the design segment, Brownlee praised Apple's haptics and more specifically the Taptic Engine. That video segment is set up below to start at that point.

Two years ago, iFixit posted a report on the Taptic Engine titled "Good Vibrations: How Apple Dominates the Touch Feedback Game." The iFixit article states that one of the future applications envisioned for the Taptic engine could be providing realistic keyboard feedback on a virtual keyboard. This would be a major breakthrough in the industry if Apple's Taptic could pull that off.

In our Saturday report titled "Apple Finally Reveals that one of their Foldable Display Patents is now Focused on being a Foldable Laptop," we noted that Microsoft's upcoming dual display tablet can convert to being a foldable notebook by using a slip-over magnetic keyboard. We provided a video that illustrates that exact feature.

Apple's foldable "Laptop" would have a distinct advantage over Microsoft's Surface Neo if they were able to deliver a virtual keyboard that actually mimics the feel of a true keyboard. All virtual keyboards today fail at delivering such a feature to user's satisfaction.

With that said, on Thursday a new Apple patent relating to their haptics device (the Taptic Engine), introduced the use of a new sensor called an inductance sensor.

In their patent background, Apple notes that a haptic device or haptic actuator is an example of a device that provides the tactile feedback to the user. In particular, the haptic device or actuator may apply relative amounts of force to a user through actuation of a mass that is part of the haptic device. Through various forms of tactile feedback, for example, generated relatively long and short bursts of force or vibrations, information may be conveyed to the user.

Apple's patent FIG. 1 below covers a mobile wireless communications electronic device (an iPhone, iPad, MacBook) that contains a haptic actuator (#40) that provides haptic feedback to the user in the form of relatively long and short vibrations; FIG. 3 illustrates the position of the new inductance sensor within the Haptic device. 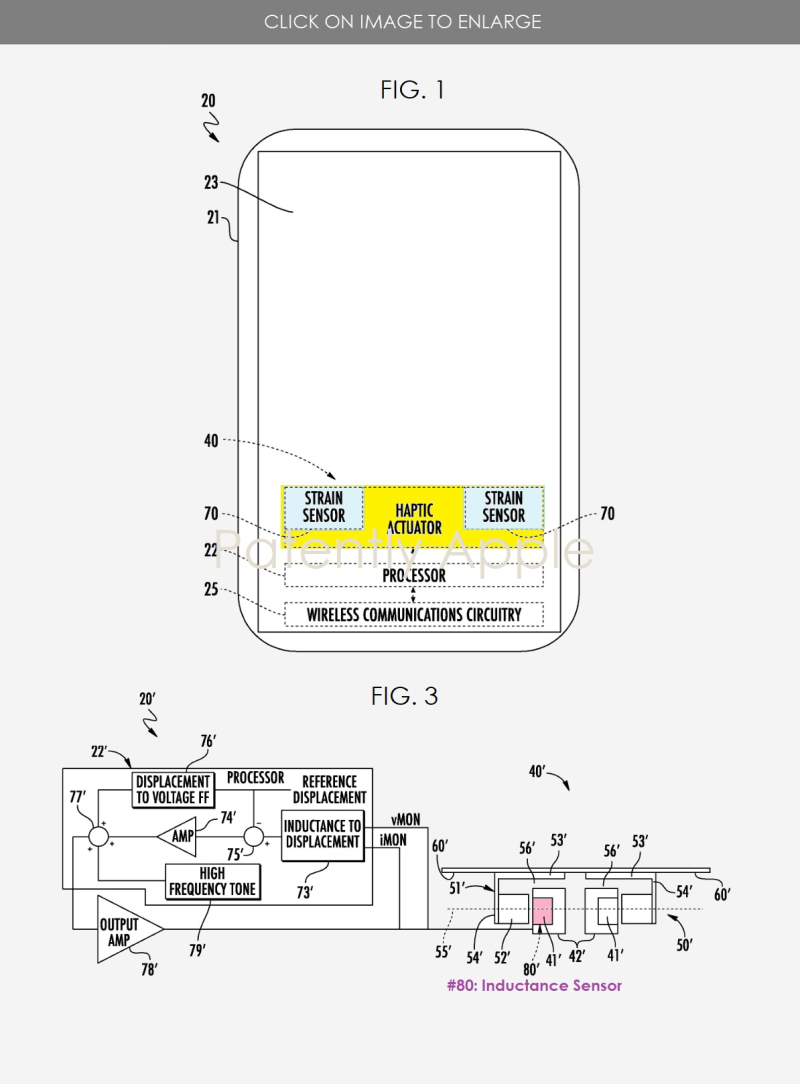 Oddly Apple's patent is disorganized and confusing. For instance, Apple illustrates FIG. 3, as noted above, and yet there are no details available for FIG. 3 making it a little difficult to follow.

In the bigger picture, Inductive sensors could be used to replace physical buttons and/or keys on a virtual keyboard. Apple's patent is technical and provides little insight as to how Apple will take advantage of inductance sensors. However, one reference could support the keyboard theory.

"… deformation of the display layer, caused by user input, may cause displacement of the field member, the displacement of which may be measured by way of the strain sensors. If a threshold amount of force is applied, as determined by the processor, the processor may operate the haptic actuator to provide haptic feedback, for example, to provide a "click" feedback based upon the input."

Longer term, Apple could technically use inductance sensors to provide inductive sensing (that is mentioned in the patent) on metal. While it's use on metal isn't part of Thursday's patent, it's where the technology could be applied in the future to create waterproof metal buttons.

A 2016 EDN article stated that "Inductive-sensing technology is revolutionizing the traditional approach to designing human-machine interfaces (HMIs). System designers are rethinking fundamental building blocks such as simple on/off buttons and attempting to solve many of the problems that have existed in button designs for decades.

The article was derived from a research paper by Texas Instruments titled "Inductive Sensing Touch-On-Metal Buttons Design Guide. The image below covers touch-on-metal buttons using "inductive-sensing" technology. The sides of Apple's iPhones remain metal based and ideal for such a future application.