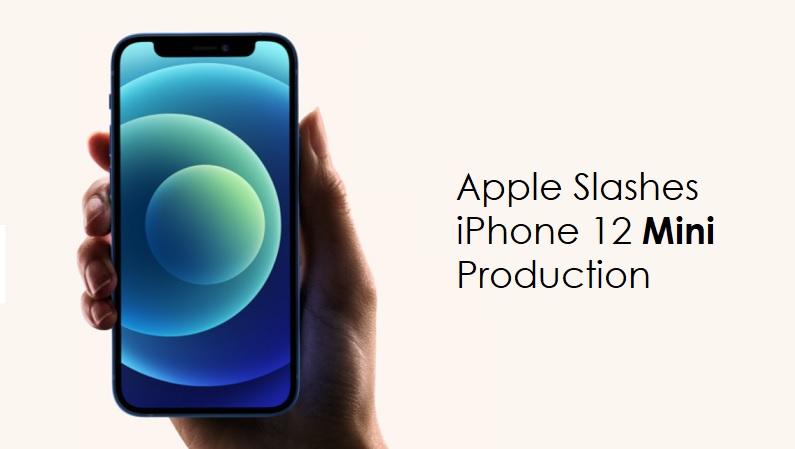 On January 22nd Patently Apple posted a report titled "Apple cuts iPhone mini orders with Pegatron while boosting iPhone orders for the iPhone 12 Pro Series with Foxconn." This was followed up with a February 9th report titled "Apple's iPhone 12 Mini Sales never got traction as the trend for larger Displays has steadily been growing over the last two years." Today a new report claims that the cuts will go deeper.

According to a new Nikkei Asia report, Apple is slashing its planned production of the iPhone 12 mini for the first half of this year as part of a broader adjustment to output plans it formulated late last year.

Apple is reportedly cutting orders for all iPhones by around 20% compared to its plans in December, according to sources familiar with the matter, with the majority coming from the mini, its cheapest 5G-enabled phone.

Late last year, Apple told suppliers to secure components and parts for up to 96 million handsets, including the entire iPhone 12 series. The company is now targeting production of around 75 million units -- slightly higher than iPhone shipments in the same period last year.

The company told suppliers that it still intends to build 230 million iPhones for 2021, an increase of more than 11% from last year, sources said.

The biggest revision is for components and parts for the 5.4-inch iPhone 12 mini, multiple sources said, which retails for around $699. Some suppliers were even asked to temporarily stop building components specifically for the mini, a source told Nikkei. The mildest estimate was that Apple will cut planned production by more than 70% for the six months through June.

Another problem for the iPhone 12 mini is its battery, an analyst at Isaiah Research told Nikkei Asia. "The battery for the iPhone 12 mini is much smaller than the older iPhone 11, which is about the same price, and it's smaller than the battery in the iPhone 12, which is only $100 more expensive. ... A 5G phone generally consumes more power, so consumers will be reluctant to buy a phone that, comparatively, does not have a good battery."

Meanwhile, Apple has rescheduled plans to begin mass production of two new MacBook laptops in the second half of the year, from the previous schedule of May or June, Nikkei has learned. The two MacBooks will be powered by the Apple Silicon processor as part of a two-year transition away from longtime supplier Intel's microprocessors. For more, read the full Nikkei Asia report.

Lastly, Apple's CFO Luca Maestri told investors in January that the company was experiencing some supply constraints but it estimated that supply and demand for the iPhone will reach a balance during the March quarter.

Yesterday Patently Apple posted a report titled "Samsung's Prolonged Suspension of their chip plant in Austin could disrupt OLED display drivers used in OLED based iPhones." This could add to the supply constraints that Maestri alluded to.