Apple introduced 3D Touch in September 2014 and offered 3 levels of force touch. It lasted until the iPhone 11 when they replaced 3D Touch with Haptic Touch in September 2019. Last year Marque Brownlee tweeted "I miss 3D touch" and one reply to him stated "We all do."  Could 3D Touch ever return to market? Yes, it's possible that it could because a new patent application from Apple was published last Thursday that describes the reinvention of this feature.

Last week the U.S. Patent Office published a patent titled "3D Touch." It was originally filed 3 months after the feature was publicly dropped on iPhone 11. The decision to drop 3D Touch was made much earlier in the year. Yet if it was really dead, then why would Apple file a new patent this feature?

Apple provides us with a possible explanation as to why it was dropped and why it could return. In the patent background Apple notes the following;

"Typically, however, components for detecting the amount of force exerted on an interface surface of a touch sensitive component can utilize complex and expensive sensor arrays to extend this desired functionality to the entire surface. These expensive arrays can also occupy a large spatial volume inside the electronic device, thereby potentially increasing the size of the device or reducing the space available for components that may provide additional desired functionalities."

Apple's new 3D Touch invention is to remedy these issues that were part of the original 3D Touch. In Apple's patent point #0026, they state:

In some examples, detecting the amount of force applied to an interface surface can be achieved with a pressure decay sensor disposed in the internal volume.

This pressure decay sensor can be relatively small and inexpensive, and can be disposed at almost any desired location in the internal volume. This allows for smaller devices or devices that include increased room for additional or larger components, as compared to a device that includes an array of force detecting components.

The pressure decay sensor can detect an increase in the pressure of the internal volume that can be attributed to the deflection or deformation of the interface surface when a force is applied thereto, and can further detect the rate of decay of the pressure. The amount of force can be at least partially based on the detected rate of decay.

In order for the force detecting functionality to provide benefits to a user, it can be desirable to be able to accurately and reliably detect the force without the force detecting sensors producing false positives or providing signals with so much noise that the device does not respond as desired to a user's touch input. 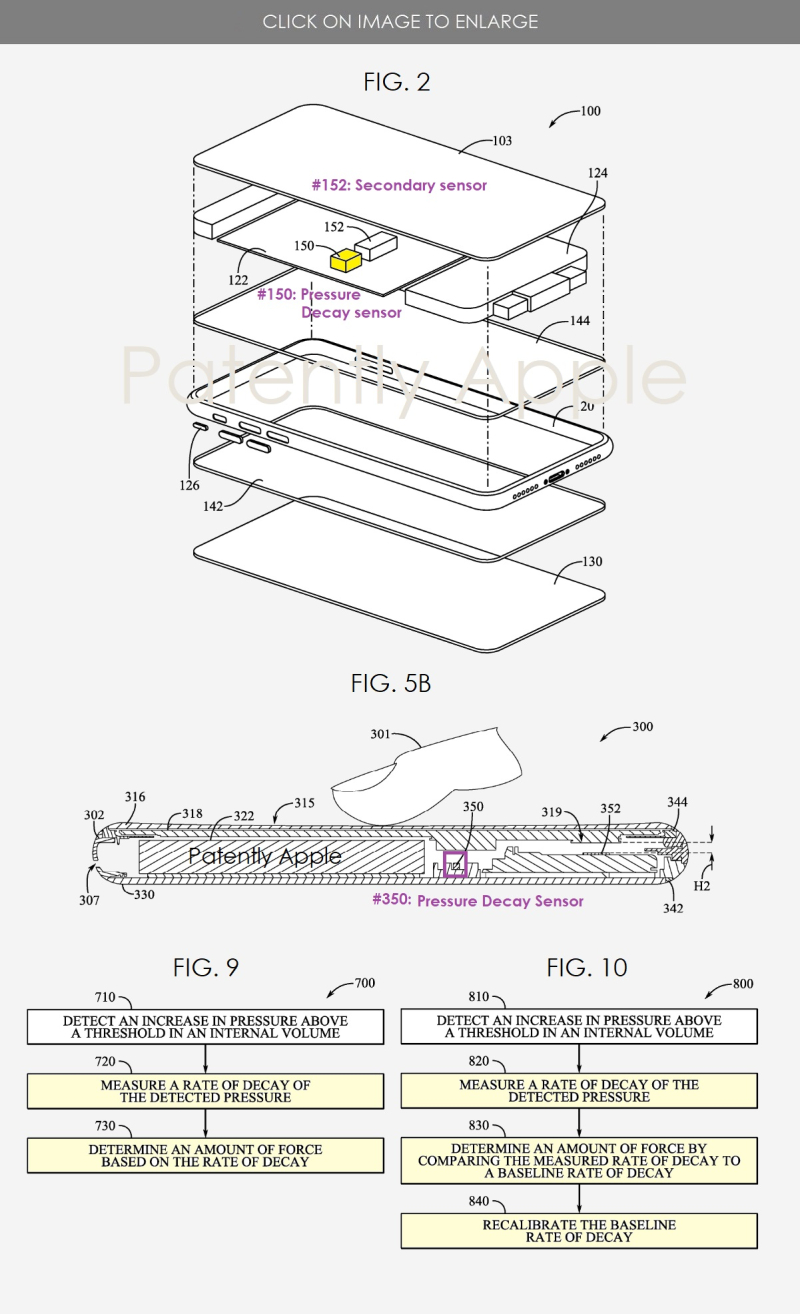 In respect to FIG. 5B, the rate of change of the pressure of the internal volume from an increased pressure back to a baseline or ambient pressure, as detected by the pressure decay sensor #350, can be used to determine an amount of force applied to a surface of the device, such as the exterior surface defined by the cover (#316).

While Apple's latest 3D Touch patent doesn't guarantee that this feature will return to market, it does indicate that Apple wanted to reinvent this feature so as to reduce the space it took within an iPhone or Apple Watch and reduce its related costs by simplifying its sensor systems. Apple will still have to test this new approach to ensure that it produces true 3D Touch as described. It's unknown if testing has been done or will be done in the future.

In the end,  is there a chance that 3D Touch could return to market in the future? Yes.