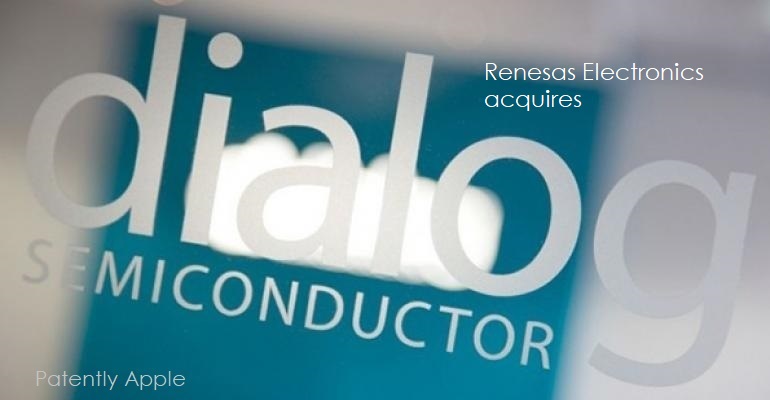 It's being reported today that Renesas Electronics Corp. of Japan has agreed to acquire Apple Inc. supplier Dialog Semiconductor Plc, the latest U.K.-based chipmaker being sold to Asian investors.

Dialog accepted the all-cash offer of about 4.9 billion euros ($5.9 billion), at 67.50 euros per share, the companies said in statements Monday. Dialog shares rose as much as 18% in early trading in London on Monday. Renesas shares dropped as much as 6.9% in Tokyo.

The offer price is a 20% premium to Dialog’s Friday close of 56.12 euros. Shares of the company -- headquartered near London but listed in Frankfurt -- have risen around 25% since the start of the year, boosted by strong demand for Apple’s 5G handsets as well as takeover speculation.

“We had multiple interested parties in the acquisition of Dialog,” Jalal Bagherli, chief executive officer of Dialog, said in a call with investors on Monday. Renesas was chosen for its culture, reputation, technology and market reach, he said.

Both companies have found themselves part of tensions concerning the semiconductor supply chain. Apple has grappled with a shortage of vital chips that manage power consumption in iPhones and other devices, people with knowledge of the matter said in November.

Like Dialog, Renesas is also a supplier to Apple. The U.S. tech giant was reported to be in talks to buy Renesas SP Drivers, 55% owned by Renesas, in 2014. The unit, which managed LCD displays, was later sold to Synaptics Inc. for $475 million. For more, read the full Bloomberg report.