Home Archives Contact Us Subscribe Twitter Facebook Patently Mobile
Facebook's VP of AR/VR Development Confirms that the company is considering the use of Facial Recognition Cameras on their Smartglasses
In Q4 2020, Apple's iPhones led the European Market, inching out Samsung

Protestors at South L.A.'s Historic Leimert Plaza Park shut down Production of a Shoot for Season 2 of the Apple TV+ Series 'Truth Be Told' 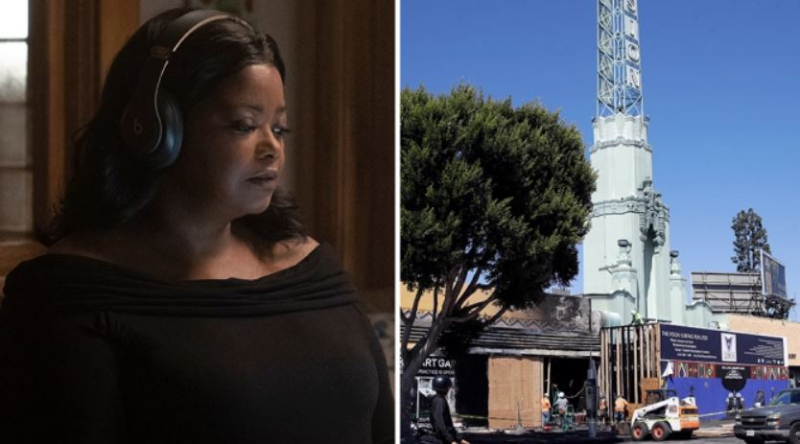 Yesterday the filming of the second season of the Apple TV+ series 'Truth Be Told' was a little tense. A shoot at South L.A.’s historic Leimert Plaza Park for the crime drama was suddenly cut short when local protestors vehemently objected to the crew and cast’s presence.

Referred to as "community members," by FilmLA, the protestors were primarily concerned with the plight of the homeless in the City of Angels and the announced presence of the Octavia Spencer became the object of their ire.

Specifically, the organized protestors objected to how filming was allowed to go on in areas like Leimert Plaza Park while the jurisdiction have been denied to those without a roof over their heads.

Though the gates at Leimert Plaza Park are now open during the day, many parks have been locked up or greatly restricted by civic officials in recent months due to the coronavirus pandemic.

With around ten Truth Be Told crew members on location, the FilmLA permitted shoot came to a halt around 3 PM as things got heated very quickly, I hear. Nearby vendors wanted the filming to continue, even though some protestors said that they were there for the vendors themselves.

For Truth Be Told, the plan had been to film a flashback scene for Spencer’s crime podcast host Poppy Parnell character and her producer Noa Havilland, portrayed by Katherine LaNasa. Because the focus was on a flashback, neither Oscar winner Spencer nor Longmire alum LaNasa were actually in attendance. Yet, there were two actresses in the park Thursday playing the younger Parnell and Havilland. They made their retreat with the rest of the production.

LAPD were on the scene soon afterwards the situation began to escalate.

After today, it is highly unlikely that Truth Be Told will be returning to Leimert Plaza Park anytime soon , I hear. Other locations that meet the Nichelle Tramble Spellman created show’s needs are being secured it seems. For more, read Deadline's exclusive report.