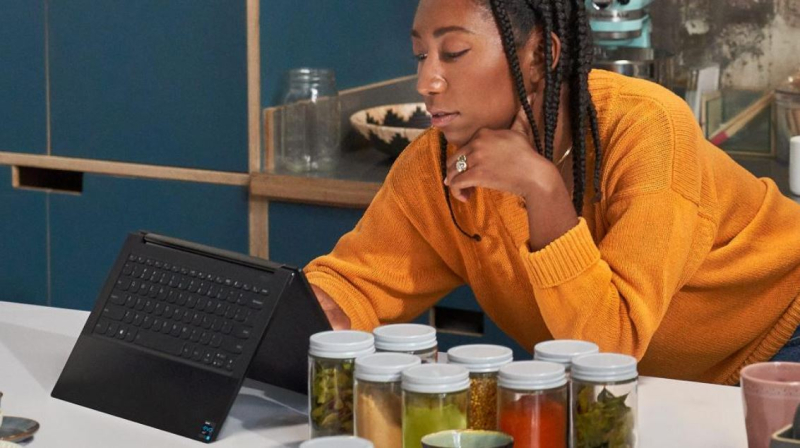 A 2-in-1 Notebook Form Factor not Available for MacBooks. Click on image to Enlarge

On January 15th Patently Apple posted a report titled "With PC Sales on Fire in Q4, Apple plans to keep the Momentum Humming with newly redesigned MacBooks and iMacs on the way." In that report we noted that "The excitement over Macs powered by the new M1 shocked the industry back in November and more importantly rocked Intel. Yesterday the incoming CEO Pat Gelsinger spoke with employees about Intel's future and stated: "We have to deliver better products to the PC ecosystem than any possible thing that a lifestyle company in Cupertino” makes. Yes, "We have to be that good, in the future," Gelsinger added.

The report further noted: "Imagine the ripple effect Apple's M1 has had on Intel directly that would even motivate Gelsinger to make that point in his first address to Intel employees. Apple's SVP of Hardware Technologies Johny Srouji and team must have enjoyed such a compliment from Gelsinger who is a well respected industry figure and fellow engineer."

It now appears that one of the first things Gelsinger did after returning to Intel was to get his team to investigate Apple's M1 in-depth and design a plan of attack to support Intel Partner laptops powered by Intel processors. Apple had attacked and basically mocked Intel processors and the gloves are now off with Intel firing back at Apple's M1 claims by putting forth a series of new slides showing that Intel based notebook have clear advantages over M1 MacBooks.

Below are a series of Intel slides illustrating the M1's weaknesses over certain Intel laptops. What was glaringly off target is that Intel knows that Apple's bigger gun specs are being aimed at their upcoming 16" MacBook Pro which will likely deal with issues like being unable to run multiple displays that pro users need. So some of the points that Intel is making is likely to be very short lived.

The fact that Intel felt compelled to defend Intel processors by putting the M1 under a microscope only gives Apple more incentive to embarrass Intel processors further when their new 16" MacBook Pro and redesigned iMacs come out later this year. Below are some of the jumbo slide images that you view in full detail by clicking on each image. 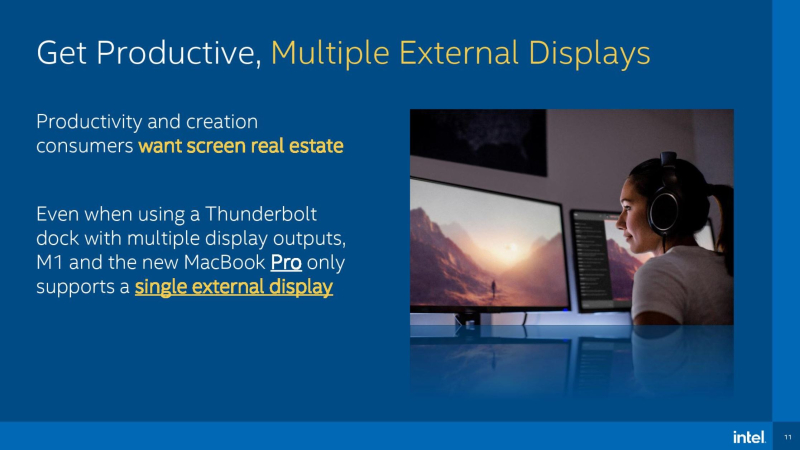 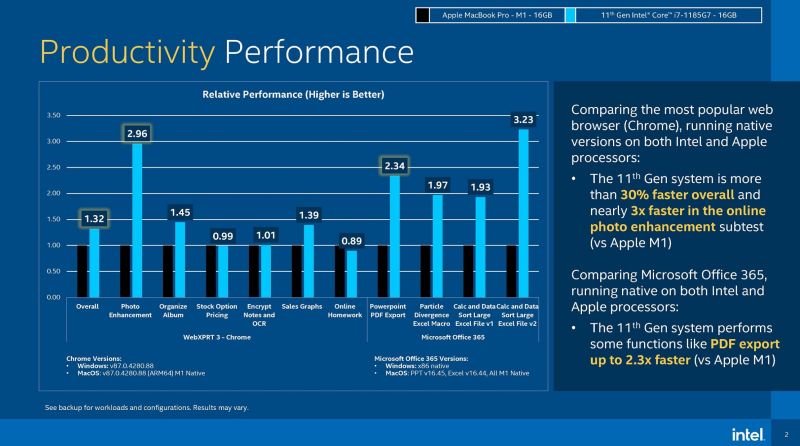 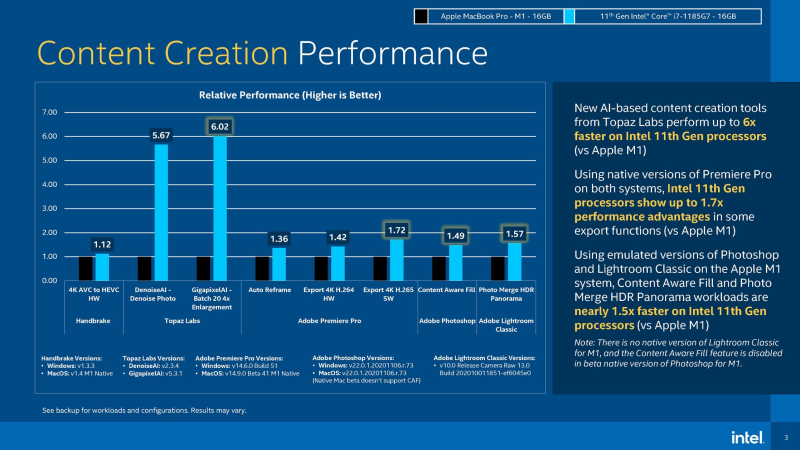 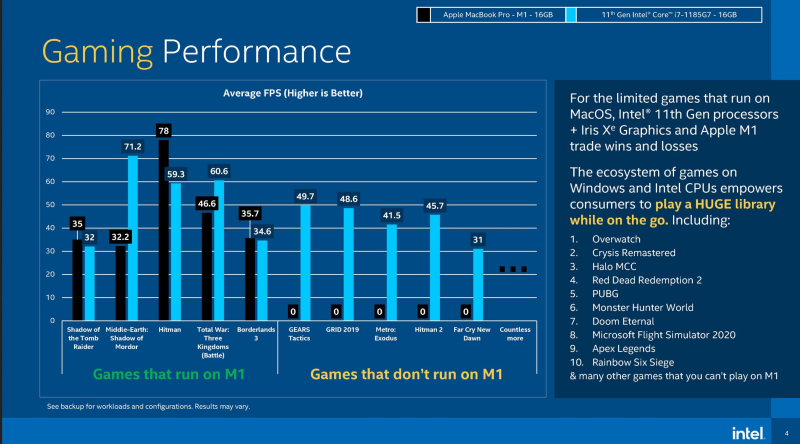 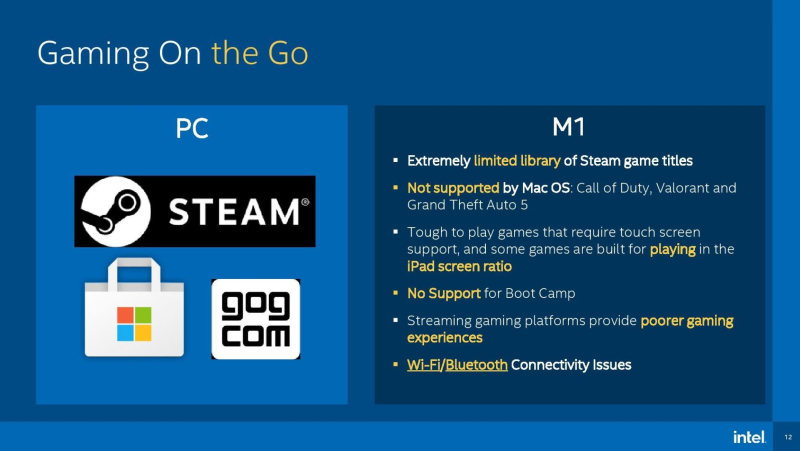 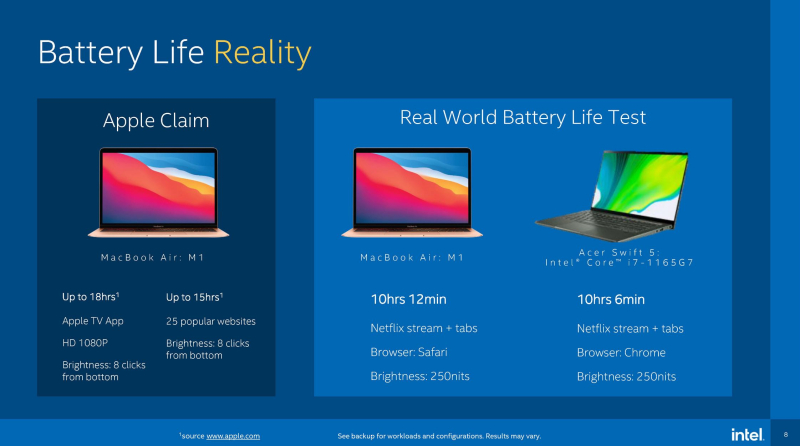 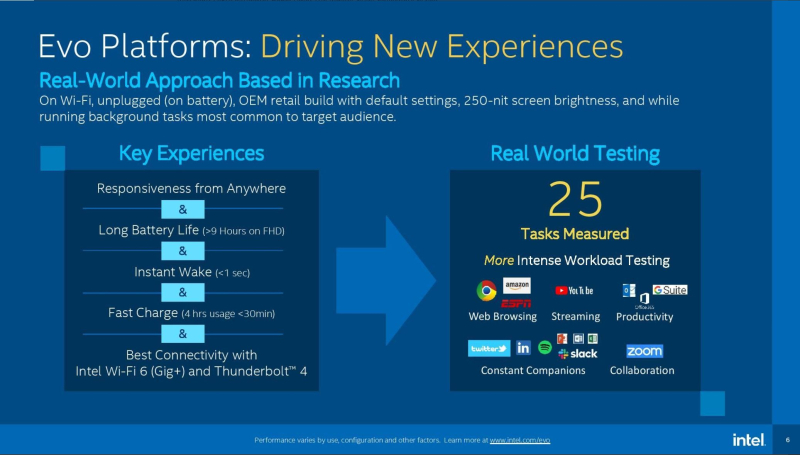 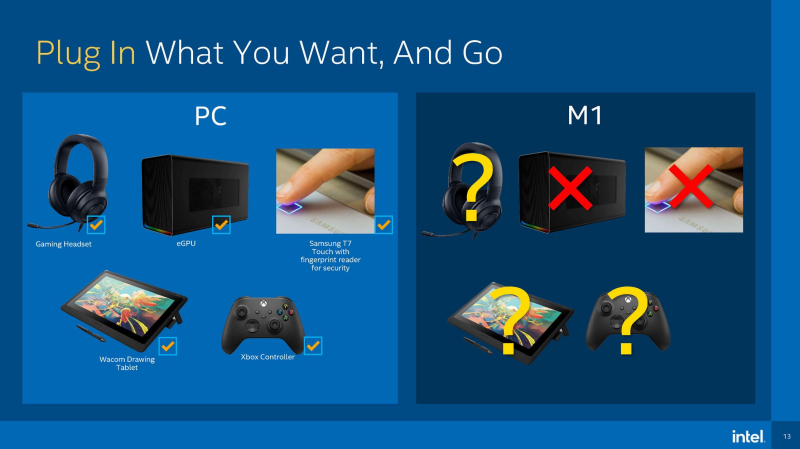 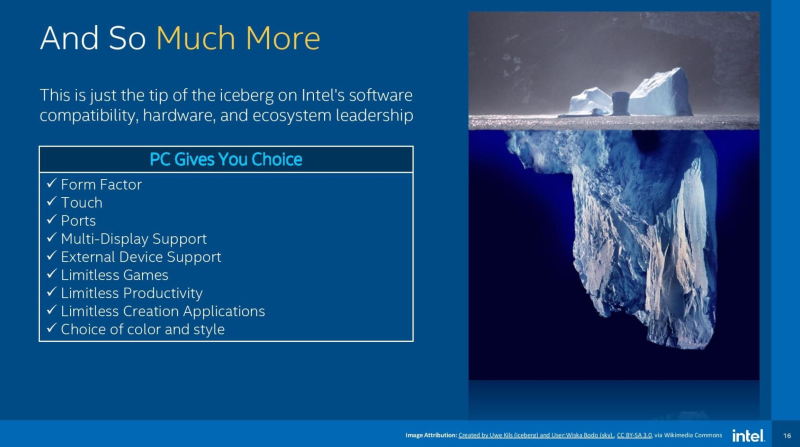 Tom's Hardware's Andrew Freedman posted an article about Intel's slide attack on Apple's M1 that you could review here. Freedman concluded that "Intel's performance claims need to be taken with a certain grain of salt, as they're Intel-created tests and not industry-standard benchmarks. The fact that it switched out between the Pro and the Air for battery life (as well as the Core i7-1185G7 and Core i7-1165G7) also shows an incomplete picture."

Freedman further stated that "The slides paint two pictures: Yes, Apple has work to do in this transition, and the touchscreen, multi-display support, and limited port selection need to be fixed. But the fact that Intel went through putting these slides together also shows that it sees a formidable opponent worth comparing its chips against, suggesting a competitive future for notebooks."

Additionally, Intel can't undo the rave reviews that Apple's M1 has already received from PC reviewers like Marques Brownlee that has an excellent review of the M1. His opening monologue was simply perfect. You get to see what an Apple fan will think vs a skeptical PC user. On one side, Apple makes claims with weak unsubstantiated claims while on the other hand making direct comparisons between the M1 and Intel processors misses the point.

At about the 2:04 mark of the video review, Brownlee states that following:

It's the same reason we don't really compare on paper iPhones and Android phones. iPhones always "Lose" on paper.

This is the iPhone 12, it only has 4 gigs of RAM and has a 2815 mAh battery. Like that would be pretty weak, that would be really weak on pretty much any Android flagship phone these days. But because of all the tight integration on the SOC, all the parts directly talking to each other instead of passing stuff around less efficiently, this is [the iPhone 12] one of the most powerful phones that you can get today. And battery life is fine.

This is why Apple never really talks about those numbers on paper. They don't tell you the GHz when they don't have to; they don't give the battery size in milliamp hours ; and they don't really like to tell you to tell you how much RAM is on the new iPhone. But Instead what they'd rather do is communicate the experiences enabled by these pieces, so hours of battery life and how much web browsing you can get out of video playback time and that sort of thing.

Of course I still have issues with the way Apple presents their numbers. There's kind of no perfect way to do it. Not ever use case is the same, and there really isn't anyone sitting around watching 10 hours of perfectly decoded video in a row. But, that's the way they do it. So now all of this translates to the new Apple Silicon Macs that all just gained this super tight level of integration thanks to the M1 chip."

Brownlee then went on to demonstrate how his testing showed the M1 beat out any older MacBooks with intel processors and praised the M1's on many levels. While Brownlee said he was going to wait for the MacBook Pro 16" that's on the way, he gave the MacBook Air with M1 glowing marks for entry level MacBooks.

More importantly, his argument that you can't really compare the M1 Macs on "paper specs" alone is an important point, considering that Intel has always played the numbers on paper game for justifying their new processors. They invented this type of hype marketing. That's why Android phone OEMs now use it against iPhones in a smoke and mirrors way of marketing their phones.

You could also check out the glowing review of M1 MacBooks over at Unbox Therapy. The reviewer went nuts over how much faster the M1 MacBooks worked on Final Cut Pro video editing.

The bottom line is that Intel's new CEO Pat Gelsinger is reverting back to Intel's old way of winning on paper as a way to downplay the M1's superior performance on many levels. No, Macs aren't gaming machines which Apple fans are already well aware of and yes there are some things that Apple still has to work out. However, many of the issues, like working with multiple displays, is probably going to be addressed with their upcoming M1 based MacBook Pro 16" model.

Yet Intel putting a team on attacking Apple's new M1 is really a sign of how they now fear Apple's engineering going forward. Intel's team is likely to custom taylor more attacks on any next-gen version of the M1 going forward. This is highly unlikely to be a one-shot attack.

For now, Apple fans have already dismissed anything Intel has to say, slide-show or not.  Apple fans will upgrade to M1 Macs when the time is right for their needs. Nothing Intel is selling now or in the future will dissuade them. So the attack on the M1 isn't really aimed at Apple fans.

Intel is really fearing that Apple's M1 MacBooks could appeal to entry-level and mid-level switchers. Over the next year or two buying an M1 Mac running Parallels to run Windows is likely to run faster than native Intel PCs. That could tempt even more PC users in the future to make the switch, especially business users.

Going forward, the war between Intel and Apple will only increase. Wintel is already planning to attack the iPad later this year with dual display tablet models that will double as notebooks. This is something that Apple has been patenting for years but is unlikely to counter Wintel in 2021. An Apple patent in 2015 was granted in 2018. Apple has always had their patents aimed at dual display MacBooks rather than dual display iPads. Technically they could be marketed either way. With that said, Apple is still unlikely to have such a device ready for 2021.

On the bright side, good competition heats up a market in positive ways and consumers are usually the big winners for it. Both Intel and Apple engineering teams are burning the midnight oil to bring innovations to market quicker and Macs will only get better on a faster timeline. The days of meaningful updates to MacBooks taking years to come to market is over. And Mac fans are saying: Hallelujah.