Home Archives Contact Us Subscribe Twitter MeWe Facebook Patently Mobile
After Losing their Battle against the App Store in North Dakota, Epic Games takes their fight to EU Antitrust Regulators
Hyundai Executives are under investigation over whether they Profited from False Statements about working with Apple on a Future Vehicle According to a new report posted this morning, Apple has remained the number 1 semiconductor chip buyer in 2020, representing 11.9% of the total worldwide market, according to preliminary results from Gartner, Inc.

Statement by Masatsune Yamaji, research director at Gartner: "Two major factors impacted the top OEMs’ semiconductor spending in 2020, the COVID-19 pandemic and the political conflict between the U.S. and China. The pandemic weakened the demand for 5G smartphones and disrupted vehicle production, but drove the demand for mobile PCs and video games, as well as the investment in cloud data centers through 2020. Furthermore, a rise in memory prices in 2020 resulted in increased OEM chip spending through the year."

Yamaji added that "Apple retained its position as the No. 1 global semiconductor customer in 2020, mainly due to the continued success of AirPods, special demand for Mac computers and iPads, and increasing NAND flash consumption.

Increasing demand for mobile PCs and tablets due to working from home significantly drove the production of Macs and iPads through 2020.  "The company also began its transition to Apple silicon for its Mac product line in the second half of 2020." 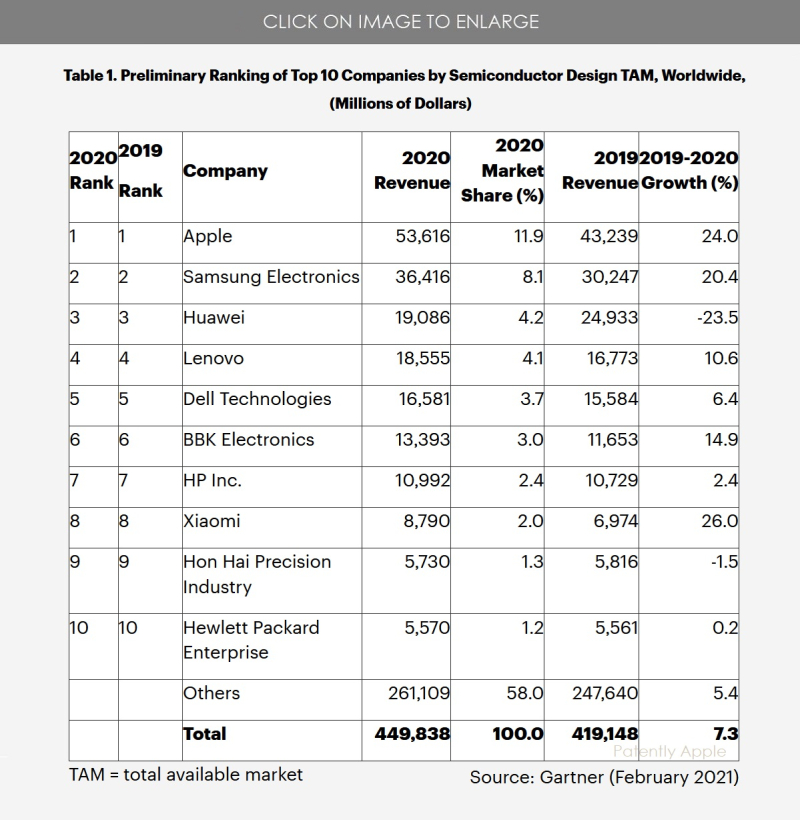 In Masatsune Yamaji statement he stated that "The pandemic weakened the demand for 5G smartphones." True, but not for Apple who bucked the trend in both the U.S. and China as we reported.  The absolute strength of Apple's 5G iPhone 12 was ignored by Gartner's Yamaji who strangely placed more emphasis on the iPad and Macs for Apple's leadership.

Lastly, Gartner reports that Samsung Electronics remained in second position and increased its spending by 20.4% in 2020, due to weakened competition from Huawei and the strong demand for enterprise solid-state drives (SSDs) for data centers. The company benefited from trends such as working from home and e-learning that drove demand for PCs and cloud servers in which many SSDs from Samsung are used.