As Apple's App Tracking Transparency feature is closer to going live, Zuckerberg has told his inner circle that they must 'Inflict Pain' on Apple 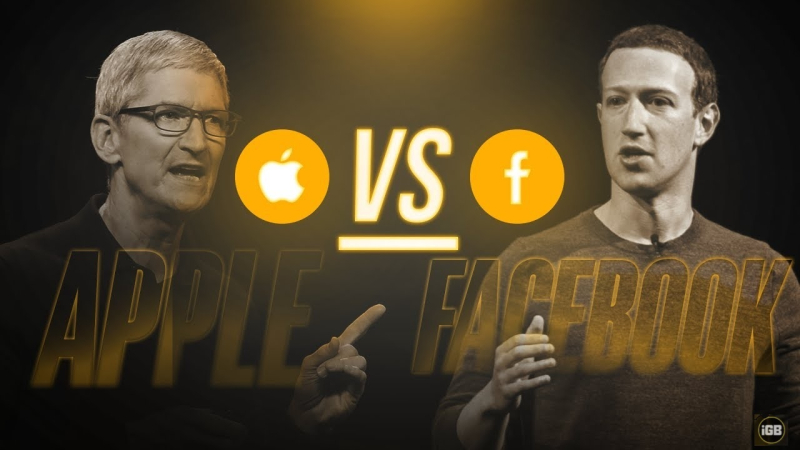 On January 28th Apple's CEO spoke at the online Computers, Privacy & Data Protection Conference and lambasted tech giants for "data exploitation" calling for reform around the practices of selling user data to target ads. During his speech, Cook stated that "If a business is built on misleading users, on data exploitation, on choices that are not choices at all, then it doesn’t deserve our praise, it deserves reform." The two companies have been jostling over the privacy issue for some time.

In late October we posted a report titled "A Coalition of Trade Groups in online Advertising including Le Monde, Google & Facebook have filed an Antitrust Complaint against Apple," that accused Apple of using privacy arguments to abuse their market power.

Facebook's Zuckerberg decided to take their argument to the next level and posted full page ads in several major U.S. Publications rantng about "Apple's forced software update which will limit businesses' ability to run personalized ads…" as presented below. 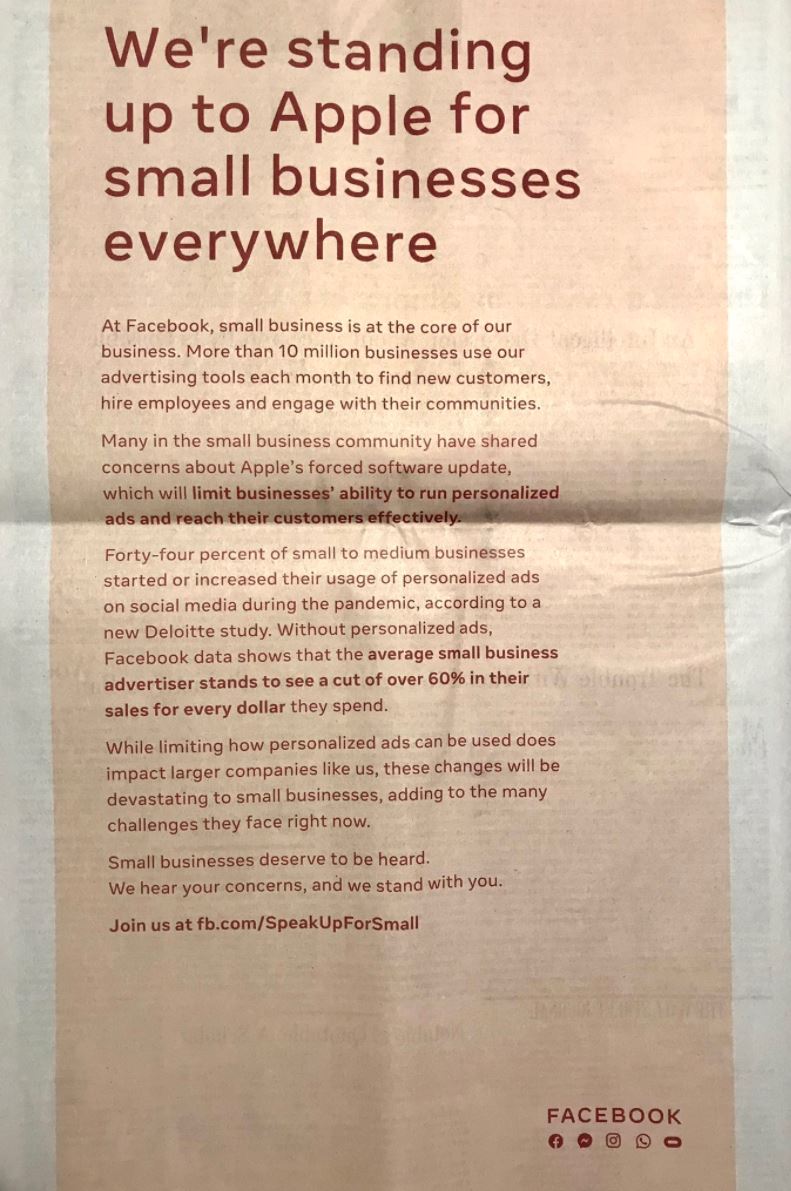 Today, The Wall Street Journal titled "Facebook Meets Apple in Clash of the Tech Titans—‘We Need to Inflict Pain.’ The report states that "Facebook Inc. Chief Executive Mark Zuckerberg has groused for years that Apple Inc. and its leader, Tim Cook, have too much sway over the social-media giant’s business. In 2018, his anger boiled over.

Facebook was embroiled in controversy over its data-collection practices. Mr. Cook piled on in a national television interview, saying his own company would never have found itself in such a jam. Mr. Zuckerberg shot back that Mr. Cook’s comments were "extremely glib" and "not at all aligned with the truth."

In private, Mr. Zuckerberg was even harsher. "We need to inflict pain," he told his team, for treating the company so poorly, according to people familiar with the exchange.

It wasn’t the first time—or the last—that Mr. Cook’s comments and actions would leave Mr. Zuckerberg seething and, at times, plotting to get back at Apple. The escalation of grievances erupted late last month in a rare public tit-for-tat between the two tech giants that laid bare the simmering animosity between their leaders, who exchanged jabs about privacy, app-tracking tools and, ultimately, their dueling visions about the future of the internet.

Apple has positioned itself as the protector of digital privacy, upholding a greater good, while often leveling criticisms at Facebook’s business model—without naming the company.

All of that grates on Facebook, which sees Apple as overreaching in a way that threatens Facebook’s existence, and hypocritical, including by doing extensive business is China where privacy is scarce. A 2017 attempt to address tensions through a face-to-face meeting between the two CEOs resulted in a tense standoff." For more on this, read The Wall Street Journal's full report (that's behind a paywall).

In a report posted yesterday by The Information, they claimed that Facebook is planning to enter the smartwatch market with focus on messaging and health. Whether that's one form of inflicting pain on Apple is unknown at this time. Though with Apple Watch surpassing the 100 million device mark, it's not clear how Facebook thinks that they can inflict pain on Apple with a new entry. Perhaps they plan to give it away and try to make money with ad-tracking revenue. Of course, only time will tell.

Other related reports on this story that we've posted in late January:

02: Facebook Desperately tries to Sell iPhone users on Giving up their Privacy for 'Thirty Pieces of Silver'

03: As Facebook's CEO Gnashes his teeth, Apple commemorates 'Data Privacy Day' by sharing a report titled "A Day in the Life of Your Data"