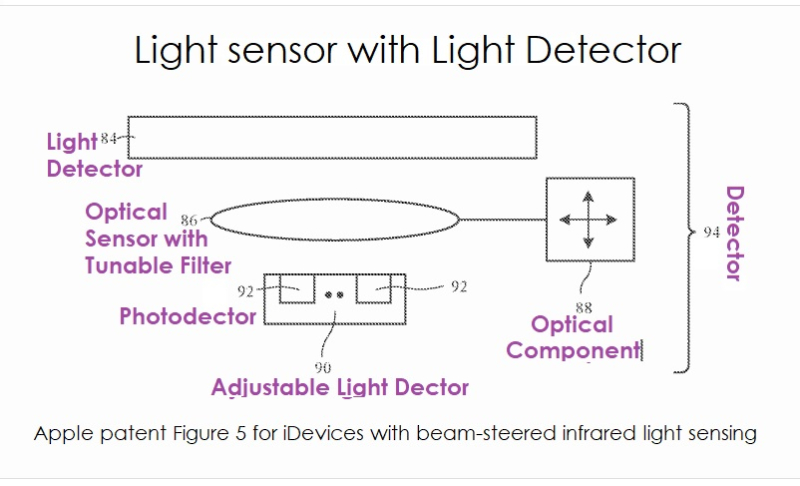 Yesterday the US Patent & Trademark Office published a patent application from Apple that relates to electronic devices like an iPhone, Apple Watch or VR headset having sensors. The sensors may also include three-dimensional image sensors, sensors for gathering distance and orientation information, and other sensors.

While the patent discusses various uses for these particular sensors, one example stood out in patent point #38 that could materialize into a future iPhone feature. According to Apple, "Infrared light may excite vibrational and rotational molecular resonances within a material. Accordingly, infrared optical sensor measurements can be used to provide information on a user's body (e.g., by monitoring a user's breath), food freshness, fat content, etc.

This is further discussed in patent point #51 where it's not just about monitoring a user's breath, it's about analyzing it. According to Apple, "control circuitry can use object recognition techniques to process the captured image and identify objects of interest for sensing. The objects of interest may be, for example, objects that were previously identified as being of interest by a user (e.g., food items, body parts such as a user's mouth where breath samples may be analyzed, etc.)." Apple points to patent FIG. 5 (our cover graphic) and it's "detector #94" found on an iDevice.

Lastly Apple brings breath back into focus once again in patent point #59 being more specific. Apple's notes that "The database information may also contain information pertaining to human breath characteristics such as typical ammonia levels, acceptable alcohol levels for driving, etc. (e.g., so a user can compare infrared spectra obtained when the target object of interest is that user's breath and/or the user's mouth to human breath data from the database)."

I think that adding a breath analyzer or breathalyzer-like feature into a future iPhone may be of value for those willing to use it before attempting to drive home after a party, event or other social gathering to ensure they're under the limit.

Of course, Apple's patent presents other examples of how optical sensors that operate at visible wavelengths could come in handy. Another example points to being able to analyze paint from a scan. This could be handy when deciding to repaint your home and you can't remember the exact color to get at Home Depot. A simple scan could provide you with the color number and brand of paint.

If you're shopping for oak furniture, a quick scan will be able to detect what is real oak from a fake laminated finish. Other scannable objects include detecting a building (if you're a tourist), an animal, inanimate objects and food.

Apple states that the scan can determine if a food item is fresh, though unless your blind, that's not likely to be a big deal. Though in other cases it could analyze a food for say, a Glycemic Index count which could assist those with Type-2 Diabetes while shopping.

In December 2020 Apple's CEO touched on Apple's work on sensors in a podcast interview. Cook had stated: "think about the amount of sensors in your car. Arguably, your body is much more important than your car."

Advancements in sensor technology is growing leaps and bounds and showing up in patents more frequently. Yesterday's revelations are just the tip of the iceberg and it's always fascinating to see what Apple is researching in terms of next-gen sensors.

For finer details, check out Apple's patent 20210041291. Considering that this is a patent application, the timing of such a product to market is unknown at this time.