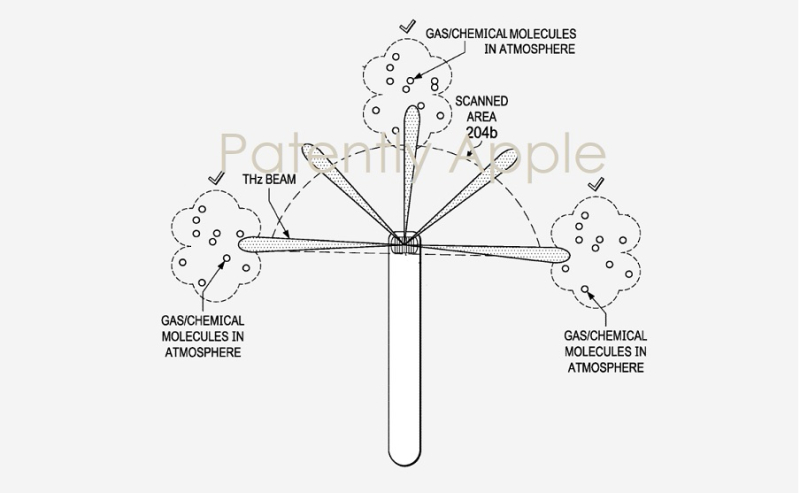 2019 was a big year for Apple patents relating to iDevices with gas detection sensors. Our report in late November 2019 pointed to Apple's fifth published patent for the year. Today the US Patent & Trademark Office published a series of four patent applications from Apple that relate to a terahertz (THz) sensor module for spectroscopy and imaging in dynamic environments to detect dangerous gasses near your iPhone (or iDevice).

Apple notes that today's sensor technologies (e.g., metal-oxide (MOX) gas sensors, electrochemical gas sensors) can detect a few gases but have several disadvantages. For example, integrating a gas sensor on a consumer electronic device requires an aperture or opening to allow air to flow onto the gas sensor so that the gas can be detected.

The design of an aperture into the consumer electronic device poses several challenges. The aperture may degrade water resistivity of the device. Also, the size of the aperture may be constrained due to a tradeoff between form factor and gas detection capability.

In addition to aperture constraints, the number of gases detected by a given sensor is limited and one sensor cannot detect gas, liquid and solid materials. Integrating multiple sensors on the consumer electronic device to detect gas, liquid and solid materials would increase the size and cost of the consumer electronic device.

Apple's invention covers embodiments of a next-gen THz sensor module for spectroscopy and imaging in a dynamic environment.

When not being used for spectroscopy or imaging, the THz sensor module(s) can be repurposed for high-speed THz-based data communication applications. Apple's patents don't elaborate on this point. 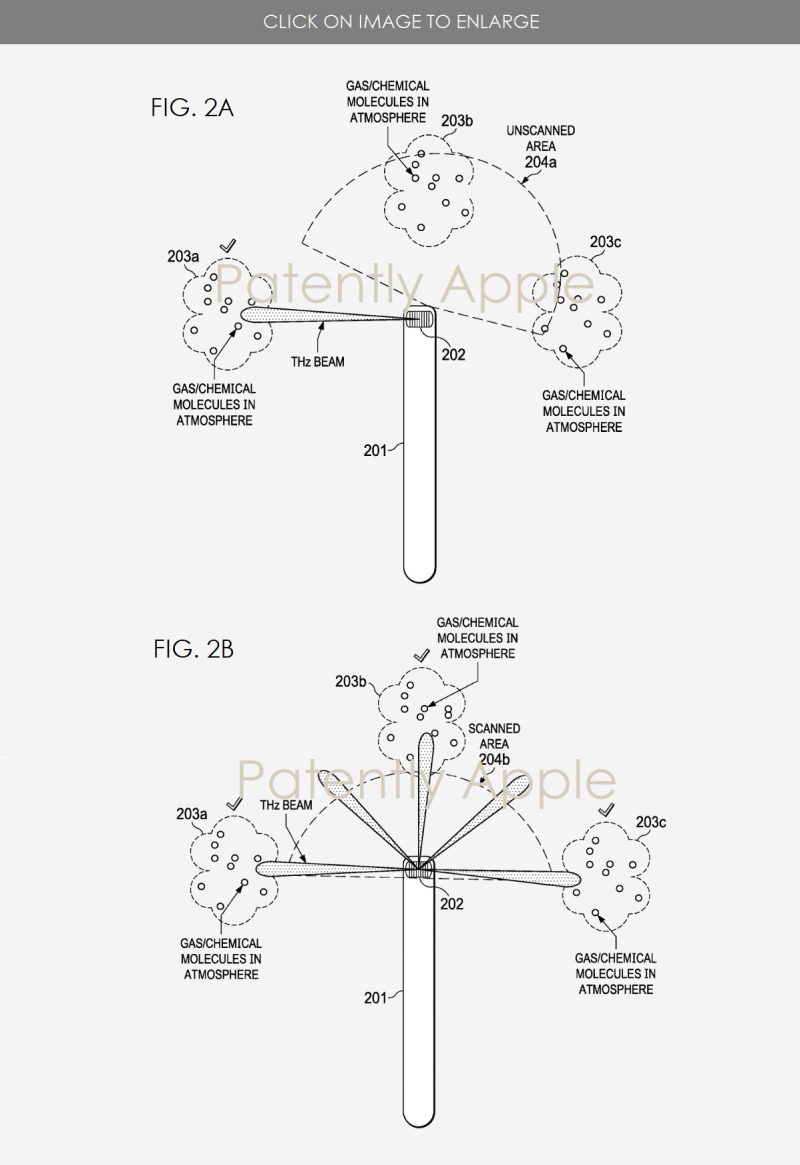 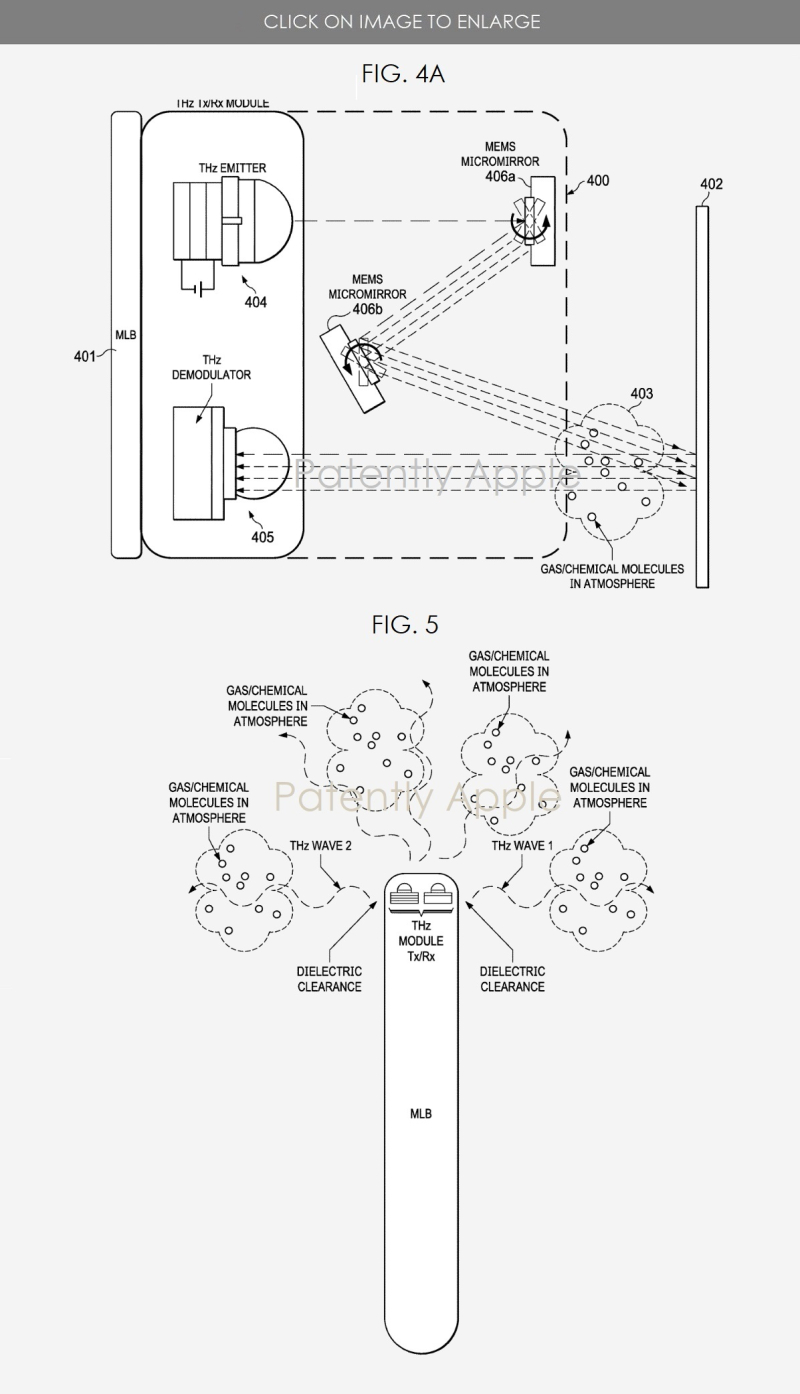 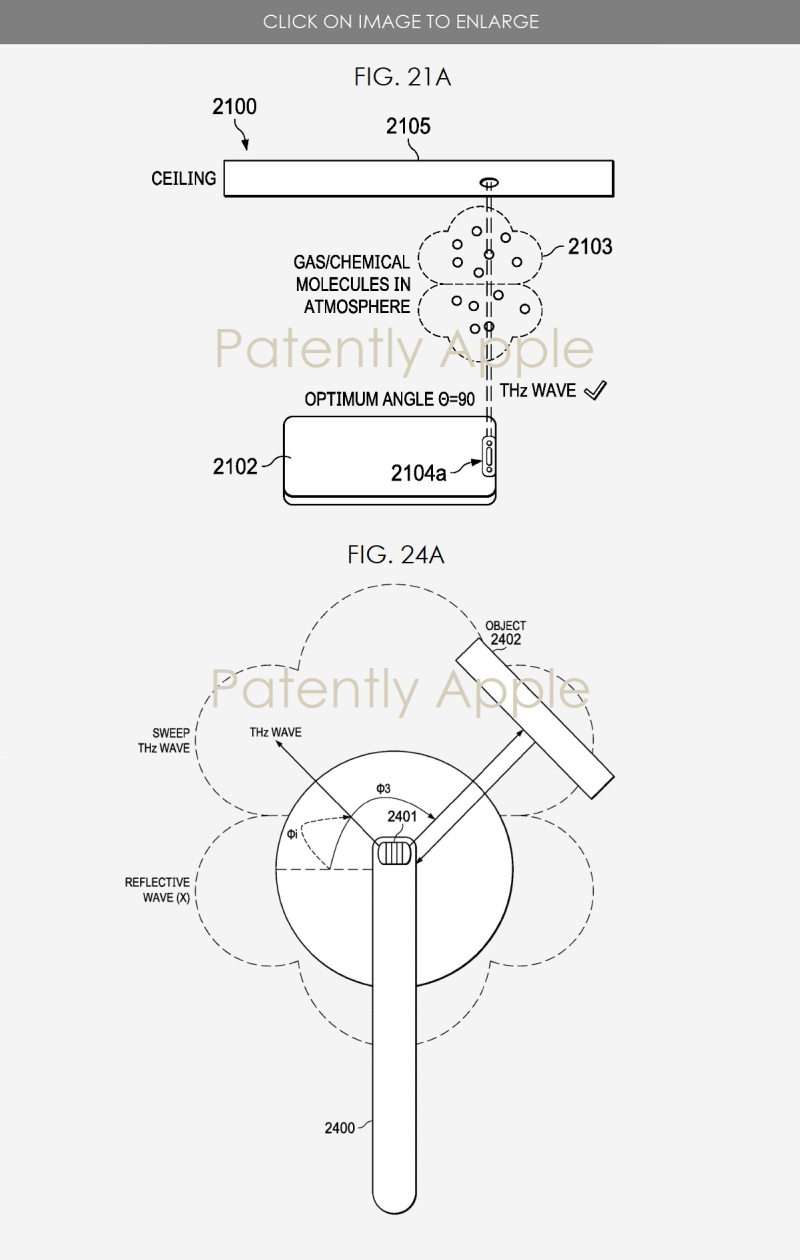 Apple notes in patent application 20210041293 that the THz system can operate in a "sniff mode" where THz EM waves are transmitted at discrete known frequencies of defined target gases that have a unique and maximum absorption spectra to improve battery performance.

As previously stated, THz transceivers typically sweep across the whole THz band of frequencies to detect the presence of a target gas. However, sweeping the entire THz frequency band (0.3 THz to 18 THz) for every scan penalizes battery performance. To improve battery performance, a "sniff" mode is used by the THz system to transmit known discrete frequencies to which defined target gases have unique and maximum absorption spectra.

In an embodiment, the device can detect smoke and/or dangerous gases caused by a fire such as carbon monoxide (CO) or hydrogen cyanide (HC), and generate an alert and/or automatically call for emergency assistance.

Lastly, although the majority of the four patents relate to detecting gases from devices like the iPhone and future HomePod mini, Apple notes the following: In addition to detecting the presence of gas, health/quality of liquid or solid materials in an environment, there is need for imaging applications on consumer electronic devices related to health monitoring, such as detecting skin cancer and other skin disorders. The conventional image sensors (e.g., CMOS image sensors) found on consumer electronic devices, however, are incapable of performing such health monitoring applications.

The patent has nothing to do with blood glucose measuring as another website is claiming.