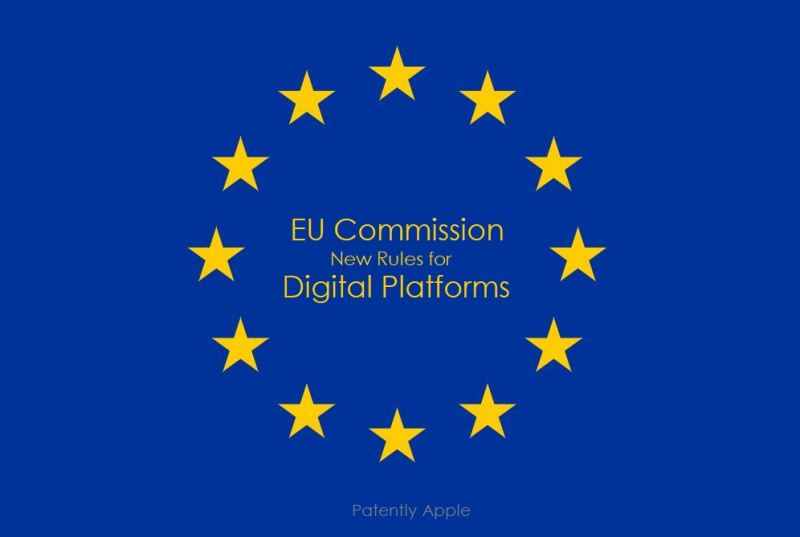 Earlier today Patently Apple posted a report titled "The EU is ready to set new Rules to curb the Power of U.S. Tech Giants and Gatekeepers like Apple, Google & Others." The EU has now released their press release on this issue and is presented in full below. All emphasis found below has been added by Patently Apple.

The segment that is likely to impact Apple most could be found under the segment titled "Digital Markets Act" wherein the act addresses the negative consequences arising from certain behaviors by platforms acting as digital 'gatekeepers' to the single market.

The EU Commission: Reform of the Digital Space

"The Commission has proposed today an ambitious reform of the digital space, a comprehensive set of new rules for all digital services, including social media, online market places, and other online platforms that operate in the European Union: the Digital Services Act and the Digital Markets Act.

European values are at the heart of both proposals. The new rules will better protect consumers and their fundamental rights online, and will lead to fairer and more open digital markets for everyone.

A modern rulebook across the single market will foster innovation, growth and competitiveness and will provide users with new, better and reliable online services. It will also support the scaling up of smaller platforms, small and medium-sized enterprises, and start-ups, providing them with easy access to customers across the whole single market while lowering compliance costs.

Furthermore, the new rules will prohibit unfair conditions imposed by online platforms that have become or are expected to become gatekeepers to the single market.

The two proposals are at the core of the Commission's ambition to make this Europe's Digital Decade.

Margrethe Vestager, Executive Vice-President for a Europe fit for the Digital Age, said: 'The two proposals serve one purpose: to make sure that we, as users, have access to a wide choice of safe products and services online. And that businesses operating in Europe can freely and fairly compete online just as they do offline. This is one world. We should be able to do our shopping in a safe manner and trust the news we read. Because what is illegal offline is equally illegal online.'

Commissioner for Internal Market Thierry Breton said: 'Many online platforms have come to play a central role in the lives of our citizens and businesses, and even our society and democracy at large. With today's proposals, we are organizing our digital space for the next decades. With harmonized rules, ex ante obligations, better oversight, speedy enforcement, and deterrent sanctions, we will ensure that anyone offering and using digital services in Europe benefits from security, trust, innovation and business opportunities.'

The landscape of digital services is significantly different today from 20 years ago, when the eCommerce Directive was adopted. Online intermediaries have become vital players in the digital transformation. Online platforms in particular have created significant benefits for consumers and innovation, have facilitated cross-border trading within and outside the Union, as well as opened up new opportunities to a variety of European businesses and traders. At the same time, they can be used as a vehicle for disseminating illegal content, or selling illegal goods or services online. Some very large players have emerged as quasi-public spaces for information sharing and online trade. They have become systemic in nature and pose particular risks for users' rights, information flows and public participation.

Under the Digital Services Act, binding EU-wide obligations will apply to all digital services that connect consumers to goods, services, or content, including new procedures for faster removal of illegal content as well as comprehensive protection for users' fundamental rights online.

The new framework will rebalance the rights and responsibilities of users, intermediary platforms, and public authorities and is based on European values - including the respect of human rights, freedom, democracy, equality and the rule of law. The proposal complements the European Democracy Action Plan aiming at making democracies more resilient.

Concretely, the Digital Services Act will introduce a series of new, harmonized EU-wide obligations for digital services, carefully graduated on the basis of those services' size and impact, such as:

Platforms that reach more than 10% of the EU's population (45 million users) are considered systemic in nature, and are subject not only to specific obligations to control their own risks, but also to a new oversight structure. This new accountability framework will be comprised of a board of national Digital Services Coordinators, with special powers for the Commission in supervising very large platforms including the ability to sanction them directly.

The Digital Markets Act addresses the negative consequences arising from certain behaviors by platforms acting as digital 'gatekeepers' to the single market. These are platforms that have a significant impact on the internal market, serve as an important gateway for business users to reach their customers, and which enjoy, or will foreseeably enjoy, an entrenched and durable position.

This can grant them the power to act as private rule-makers and to function as bottlenecks between businesses and consumers. Sometimes, such companies have control over entire platform ecosystems.

When a gatekeeper engages in unfair business practices, it can prevent or slow down valuable and innovative services of its business users and competitors from reaching the consumer. Examples of these practices include the unfair use of data from businesses operating on these platforms, or situations where users are locked in to a particular service and have limited options for switching to another one.

The Digital Markets Act builds on the horizontal Platform to Business Regulation, on the findings of the EU Observatory on the Online Platform Economy, and on the Commission's extensive experience in dealing with online markets through competition law enforcement.

In particular, it sets out harmonized rules defining and prohibiting those unfair practices by gatekeepers and providing an enforcement mechanism based on market investigations. The same mechanism will ensure that the obligations set out in the regulation are kept up-to-date in the constantly evolving digital reality.

Concretely, the Digital Markets Act will:

The European Parliament and the Member States will discuss the Commission's proposals in the ordinary legislative procedure. If adopted, the final text will be directly applicable across the European Union.

The Digital Services Act and the Digital Markets Act are the European answer to the deep reflection process in which the Commission, EU Member States and many other jurisdictions have engaged in recent years to understand the effects that digitalization – and more specifically online platforms – have on fundamental rights, competition, and, more generally, on our societies and economies.

The Commission consulted a wide range of stakeholders in preparation of this legislative package. During the summer of 2020, the Commission consulted stakeholders to further support the work in analyzing and collecting evidence for scoping the specific issues that that may require an EU-level intervention in the context of the Digital Services Act and the New Competition Tool, which served as basis for the proposal on the Digital Markets Act. The open public consultations in preparation of today's package, which ran from June 2020 to September 2020, received more than 3000 replies from the whole spectrum of the digital economy and from all over the world."

It's unknown at this time how the likes of Apple, Google, Amazon, Facebook and others will react to today's rules set forth by the EU Commission. It's equally unknown whether U.S. President Elect Biden will counter the EU's new digital demands to safeguard American interests in 2021.