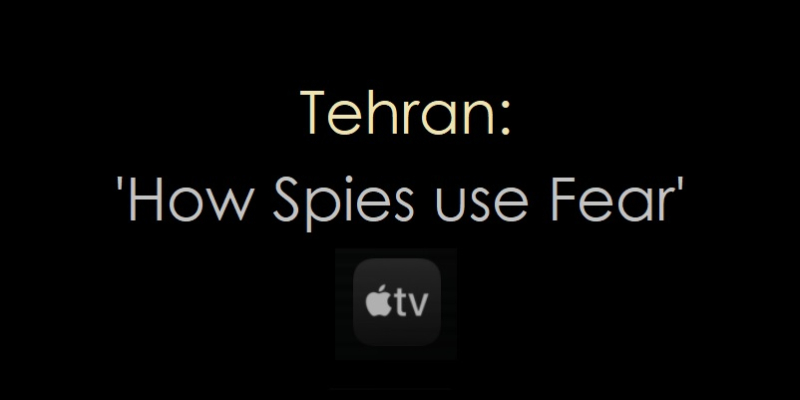 Apple appears to be running a new kind of promotion for their Tehran series. On Wednesday Apple released the first promotion titled "Tehran — Essential Tradecraft." Today, Apple's second promotion present in the video below, is titled: "Tehran – How Spies use Fear." Spies don’t let fear stop them. They use it to complete their missions. Listen to a real former spy, Orna Klein discuss her methods of using fear.

Coincidentally, The Washington Post is running a report today titled "Israel’s top-secret Mossad looks to recruit via Netflix, Hulu and Apple TV." The photo below is from the 2019 Netflix series called "The Spy" about the legendary Mossad agent whose successful intelligence-gathering helped Israel clinch its swift victory in the 1967 war and who was exposed, tortured and then hanged in a Damascus public square. I saw the series and it was excellent. Beyond the Apple TV+ series Tehran, Apple has another series in the works titled "False Flag," which is loosely based on the 2010 assassination of Hamas military commander Mahmoud al-Mabhouh in Dubai, for which Israel was blamed, according to Post.

Ronny Perry, who was responsible for the show as the head of dramatic productions at the Kan television channel stated that "As tensions between Israel and Iran escalate, the crew is preparing for its second season with one eye on news developments, "which sometimes go beyond what we could have imagined."

Not all former Mossad employees are comfortable with the new openness. Orna Klein, a former Mossad spy, said she is worried that the melodramatic portrayal could make it harder for operatives to do their jobs.

Over 26 years at the agency, she said she slept every night with the lights on, knowing that, if awakened, she would instantly need to recognize the country she was in, the language she needed to speak, the person she needed to be.

"In my days, no one talked about anything — not to the newspapers, not to anybody," she said. "That’s not the job." For more on this, read the full Washington Post report.