Apple Reveals more on a next-gen Display Technology that could be applied to varying surfaces such as a car seat, Walls & beyond 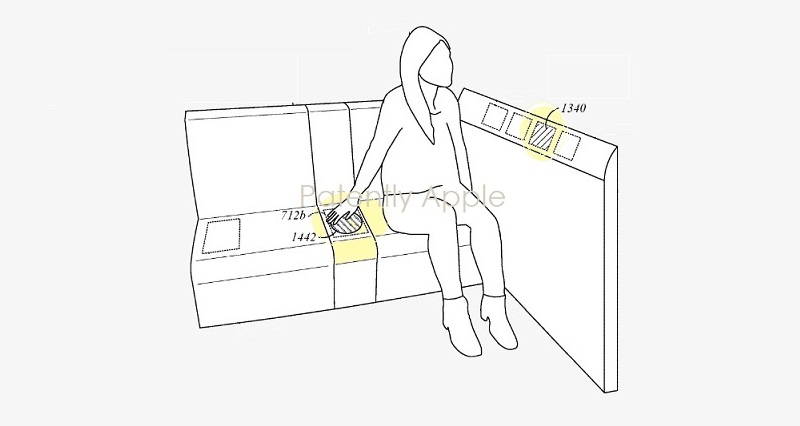 In May of this year Patently Apple posted a Project Titan report titled "Apple Wins cool Car Patent for Backseat Passenger Interfaces that are hidden in the seats, Side Panels & more." As you could see in our cover graphic, certain illuminated interfaces could be hidden in backseat areas and on side door panels and only seen as the user's hand touches or approaches the hidden displays. The patent even described floor panel displays. Apple noted in their patent that "The interface device has a deactivated state in which the interface device is concealed behind the surface." Later it states that "The interface device has an activated state in which the interface device emits light through the surface." Yesterday Apple was granted a patent that falls into this same project of hidden interfaces and new forms of displays that could apply to vehicles and beyond.

Apple has been working on a new kind of display that's unlike anything that's come before. It's a light-based display that could provide images and other light-based output to a user. If desired, the light-based device may include a sensor for gathering user input.

The light-based devices may be used in systems such as office equipment systems, building systems, vehicle systems (e.g., dashboard systems for providing a user such as a vehicle occupant with vehicle information and for gathering user input), systems built into furniture, portable electronic devices (e.g., handheld devices, glasses, and other portable and miniature devices), or other electronic equipment.

Apple's patent FIG. 12 below is an example of a light-based display for that could be used in a vehicle dashboard, be projected onto a Smart Home wall as a thermostat or as a control ring built into furniture. The light-based display's user interface is interactive. The user can rotate the image like a knob (#55). The display could also be used on a vehicle's door, which is seen from our cover graphic. 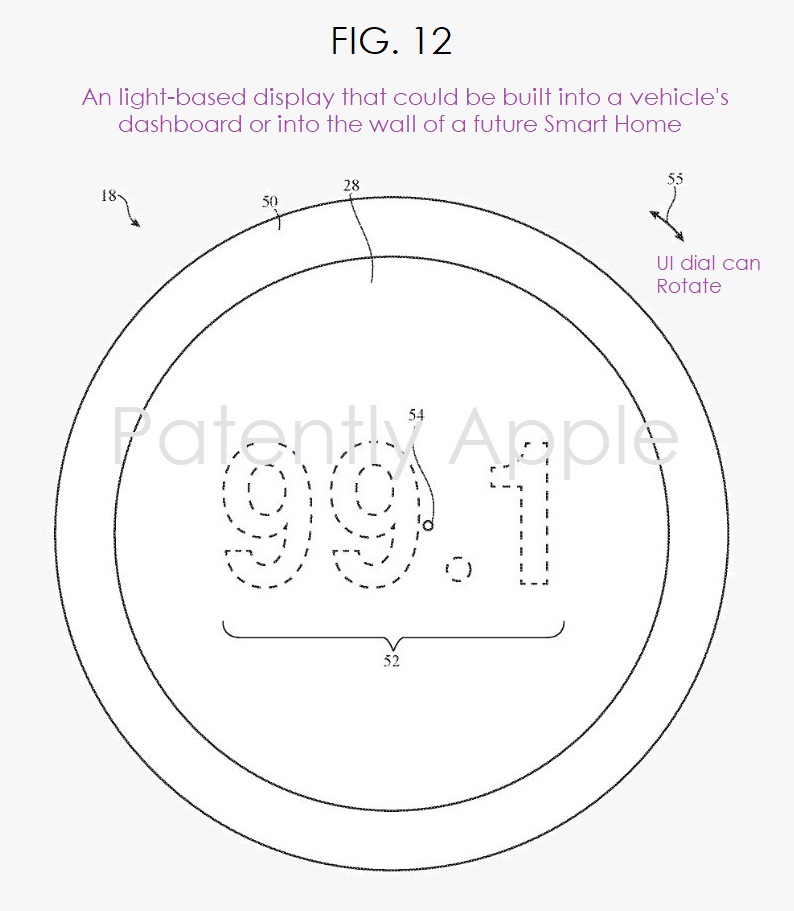 Apple describes controlling the rotation of the ringed-UI with a "rotational encoder" via a ring of magnets and a corresponding magnetic sensor.

Apple later notes that the display system on a dashboard could be set up so that when a passenger is playing a video on the dashboard its designed to block the video from a driver's view which would be seen as a safety feature.

In patent FIG. 16 below Apple illustrates another vehicle display component that could provide three-dimensional images that form buttons that could actually catch a user's fingers when the image is touched. 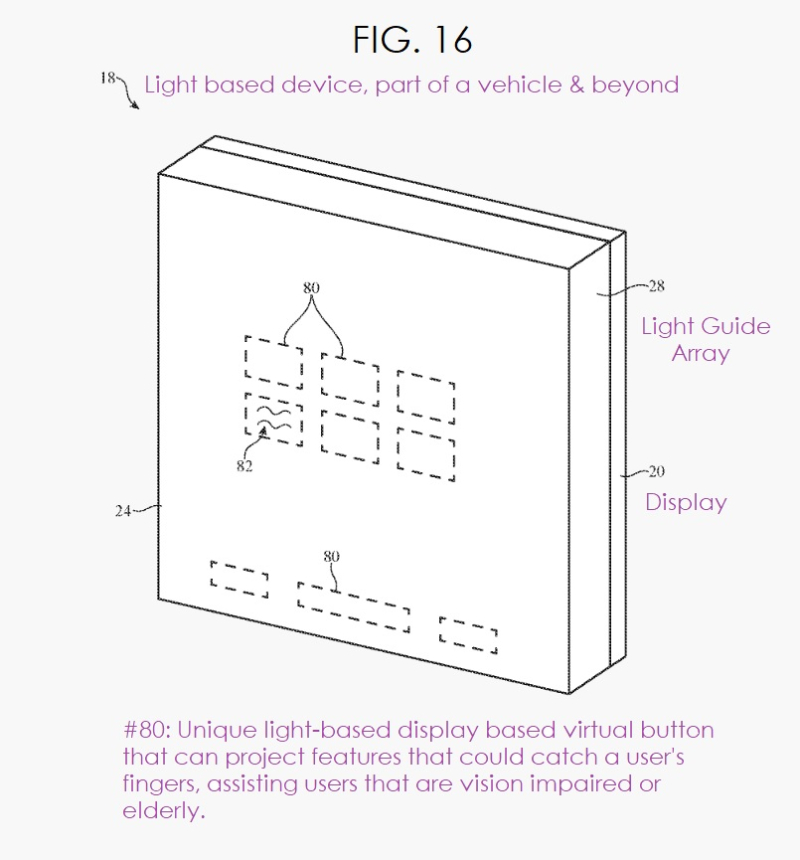 Apple further notes that the optical structures may be configured to form a light-field display that displays three-dimensional images, to direct light towards one viewer and away from another viewer. Another interesting aspect to this kind of display describe the light guide arrays possibly being fabricated from elastomeric materials such as silicones. This allows images to be displayed on the surface of a material that is deformable.

This arrangement may be used to display images on the surface of an arm rest of a chair or car seat, while maintaining the surface as soft to the touch. An elastomeric wave guide would also allow for some degree of motion between display elements while maintaining the illusion of a continuous display. This could allow variable bending of a display, or display elements that could fold around an object.

Lastly, a light guide array for a light-based device may be formed from a bundle of fibers. The fibers may be plastic fibers or other transparent fibers that are surrounded by a low index cladding material. That is illustrated in patent FIG. 20 above.

Elaborating on this facet of the display, Apple's patent FIG. 29 below illustrates a top view of light guide array #28 in which the array has been covered with a covering layer (138). 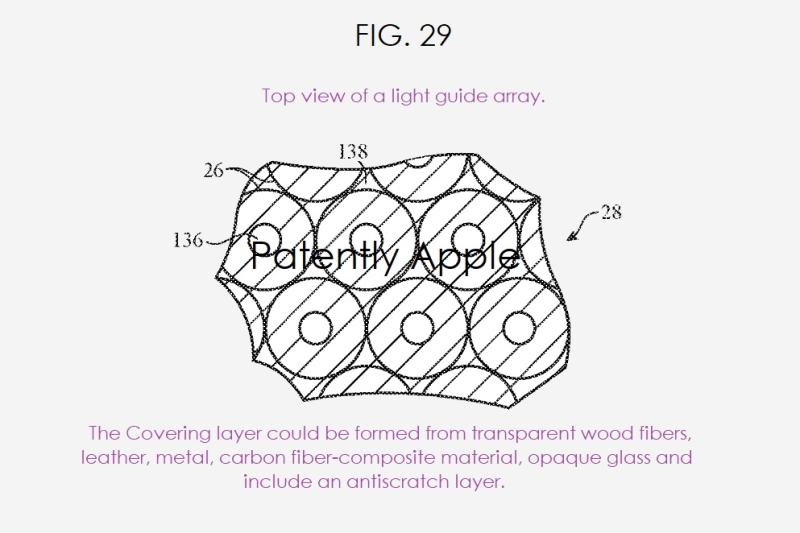 Wood may be treated to form a light guide array. The light-guide array has transparent wood fibers (#26) that guide light (#32). The wood fibers may be rendered transparent by treating a piece of wood in a chemical bath (e.g., by bleaching a wood layer in a heated sodium hydroxide bath or other bleaching agent). The bleaching process may remove materials in the wood such as lignin that might otherwise absorb light.

Apple's granted patent 10,860,142 that was published yesterday by the U.S. Patent Office was filed back Q3 2016 with its provisional patent being filed a year earlier in order to secure their invention.

The timing of such a product to market is unknown at this time, considering that Project Titan is likely to be one of Apple's longest projects in progress.