While Apple grew Mac Sales in India in Q3-20, they've yet to crack the top 5 Leadership List

Apple introduced their first generation M1 ARM processor for Macs yesterday in dramatic fashion. Apple's next wave of innovation for Macs was jaw dropping as presentation after presentation they revealed the power that they're bringing to the table. The new MacBook Air is more powerful than 98% of all notebooks on the market and their new MacBook Pro crushes all Intel based notebooks in its class.

Whether the new Macs will be able to make a dent in India in 2021 is unknown at this time. For Q3-20, Apple grew their Mac sales in India by 19.4%, its biggest quarter of shipments in India ever. The IDC report, however, didn't reveal how many Macs that growth represented. Though with Asus coming in at number 5 shipping 257,000 PC's, Apple's shipments were lower.

The top Five Companies in India for Q3 2020 were HP, Lenovo, Dell, Acer Group and Asus as presented in IDC's chart below. 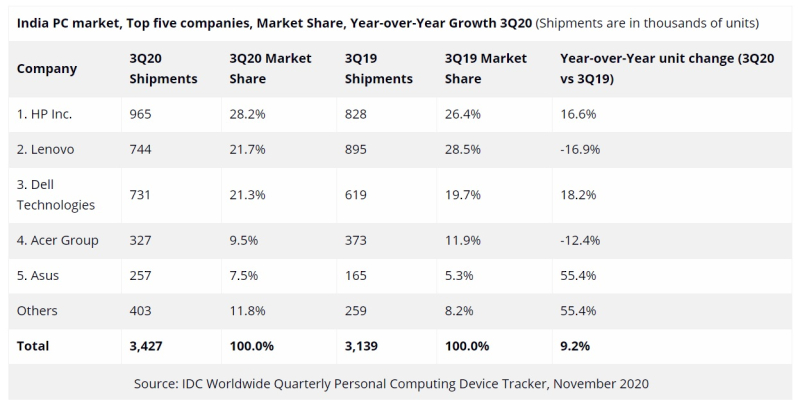 IDC reports that 3.4 million units were shipped during the quarter, as the demand for e-learning and remote working remained strong, resulting in 3Q20 being the biggest quarter in the last seven years in India.

Although the commercial segment had very few government and education projects, the consumer segment recorded its biggest quarter ever with 2.0 million shipments, growing 41.7% YoY and 167.2% from the previous quarter.

Commenting on current demand for consumer PCs, Bharath Shenoy, market analyst for PC Devices at IDC India stated for the report: "There is still a lot of uncertainty if and when will the schools and colleges return to physical classrooms at full strength. This is forcing students to manage all their learning virtually. This demand is expected to stay strong as India remains underpenetrated in PCs. To add to this, the growing broadband connectivity in the country is making online learning easier for students. Hence, this opportunity will continue to be relevant for PC vendors for at least a few more quarters." For more, read the full IDC report.

Lastly on Q3-20 PC sales in India, it was surprising to learn that China's Xiaomi has now entered the PC market. Xiaomi's popularity in India has mushroomed in recent years by battling it out with Samsung for the number one smartphone spot in India. Xiaomi is now using that popularity to drive their PC sales. It will be a point of interest moving into 2021 as a successful Xiaomi in the PC space could further suppress Mac sales.

Beyond Q3-20, Apple was set to open their first couple of mega Apple stores in India in 2021. That plan may have to be revised due to the dangers brought on by China's covid-19.