As internal memos at Apple surface regarding the 'Right to Repair' issue, the European Parliament passed a Resolution on the Matter Wednesday

Apple has been fighting the Right to Repair movement for some time. In May 2019 we posted a report titled "Apple's Lobby Group Interferes in Canadian Politics by getting a Right-to-Repair Bill Defeated." Then one month later we reported that Apple partnered with Best Buy in the U.S. (only) for expanded repair service. While Apple isn't willing to provide individual customers with access to Apple iPhone parts, they are expanding their network of repair shops that they're willing to partner with to fix iPhones out of warranty.

Of course critics like iFixit and Louis Rossman continue their fight for full 'right to repair.' Laws that they're lobbying for. In January Rossman gave testimony in Washington for right to repair and used Apple as the company that makes it impossible to fix certain Apple products by locking up access to Apple parts.

In a new report written by the founder of iFixit Kyle Wiens he states at one point that "Apple’s newest environmental progress report went out of its way to talk about the importance of reuse and repair. "We take responsibility not only for our direct operations, but for the entire life cycle of our products," Apple’s report states. It’s the first time we’ve seen Apple say "reuse is our first choice" so bluntly, and they’ve got the prioritization spot on. They go on to say, "Making repairs more convenient and reliable is directly aligned with our goal of creating long-lasting products that maximize the resources we use." This is precisely the correct stance, for both consumers and for the environment.

Apple’s report also takes a victory lap for the iPhone’s serviceability track record. Despite some bumps along the way, they’re correct that the iPhone has routinely led the pack on smartphone serviceability and longevity. When it comes to ease of repairs, Samsung’s Galaxy line isn’t even in the same solar system. 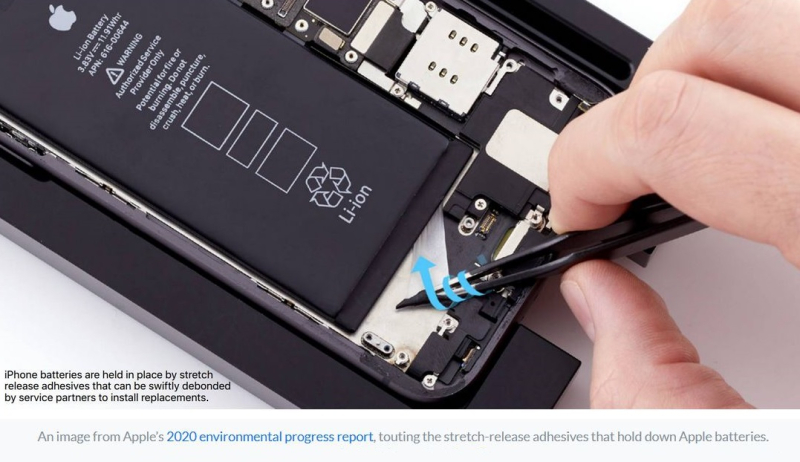 Apple’s internal repair-manual memo ends by asking, "How should our public position on Right to Repair change to take into account the updates we are making – should we connect the dots or try to keep everything separate?"

Implicit in that question is the cognitive dissonance that Apple team members must be feeling. In the minds of the public, the company’s legislative opposition to common-sense repair reforms is perceived as a desire for planned obsolescence, if not a compulsive need for control. But Apple is leading the industry with many green initiatives, and their environment team wants to move forward on reuse and repair. The entire company is justifiably proud of the industry-leading repairability of the iPhone. Why not "connect the dots"  and drop the unpopular political fight?

Apple could easily turn one of their biggest political liabilities into a win. Their Independent Repair Program already has all the elements required to comply with a Right to Repair law. And publishing the service manuals isn’t a hurdle—they’ve already done it!

Apple has an opportunity to push—nay, lead—the entire industry in a better direction. Durable, repairable, long-lasting products could be the norm." For more on this, read the iFixit report titled " European Parliament Votes for Right to Repair."

In a European Parliament News press release posted on Wednesday we learn that the 'Right to Repair' Resolution was adopted with 395 votes in favor, 94 against and 207 abstentions.

Unlike some U.S. reports on the Resolution that claim the law will simply implement a  a repairability rating system that will be forced on packaging, the reality is that Members of the European Parliament (MEPs) are calling on the Commission to grant consumers a "right to repair" by making repairs more appealing, systematic, and cost-efficient, whether by extending guarantees, providing guarantees for replaced parts, or better access to information on repair and maintenance.

They also insist on increasing support for second-hand goods markets, call for measures to endorse sustainable production and tackle practices that shorten the lifetime of a product, a point that a U.K. MP made against Apple and other U.S. tech companies that we reported on earlier today.

Finally, the adopted text proposes new rules for waste management and the removal of legal obstacles that prevent repair, resale, and reuse. This will also benefit the secondary raw material market.

From the iFixit report we learned that the debate surrounding the issue of "Right to Repair" at Apple is mounting and those involved with environmental projects at Apple now see the issue as one that they could use in their favor.

In the end, while it all sounds oh-so reasonable and promising, we'll have to wait for the EU's final regulations to be in writing so that we could understand what will actually be enforceable and what Apple will have to comply with. That will take some time, so it's not going to pushed out any time soon. Whether Apple will attempt to get ahead of the new laws-in-the-making is unknown at this time.