Apple notes in their granted patent that vehicle windows sometimes include heating and light filtering components. For example, vehicle windows may include filter layers that block infrared light. Vehicle windows with infrared-light-blocking capabilities may help avoid excessive heat buildup in vehicles that are exposed to sunlight. A rear window in a vehicle may use an ohmically heated wire for defrosting. In some vehicles, portions of windows are coated with black ink to hide interior components from view.

It can be challenging to incorporate systems such as these effectively into a vehicle. If care is not taken, window structures may be unsightly or may not accommodate desired components.

To provide the windows with desired optical properties, additional structures may be incorporated into the windows. These additional structures may include dielectric thin films, conductive layers such as thin-film metal layers, layers that form filters for blocking infrared, visible and/or ultraviolet light, ink layers and other layers for adjusting the outward appearance of part or all of a window, and/or other structures.

A system such as a vehicle may have light-based components such as light detection and ranging (LIDAR) systems, infrared illumination systems for supporting night vision, and other optical systems.

These components may operate at near-infrared wavelengths of 900-1000 nm, more than 800 nm, less than 1800 nm, or other suitable wavelengths. To allow near infrared light-based components such as near infrared LIDAR systems to operate through a window in a system such as a vehicle, the window may be provided with one or more infrared-transparent areas (infrared-light-transparent areas). These areas may be provided with an appearance that matches the appearance of adjacent portions of a window. The adjacent portions of the window may, for example, have a light gray appearance associated with an infrared-light-blocking coatings and light visible window tint and/or may have an opaque black appearance associated with a black ink window coating or other window layer.

The windows may be formed from one or more layers of transparent glass, clear rigid polymer (e.g., polycarbonate), polymer adhesive layers, and/or other layers. In some arrangements, the window(s) may include laminated window structures such as one or more transparent layers (glass, rigid polymer, etc.) with interposed polymer layer(s). The polymer in a laminated window may be, for example, a polymer such as polyvinyl butyral (PVB) or ethylene-vinyl acetate (EVA). 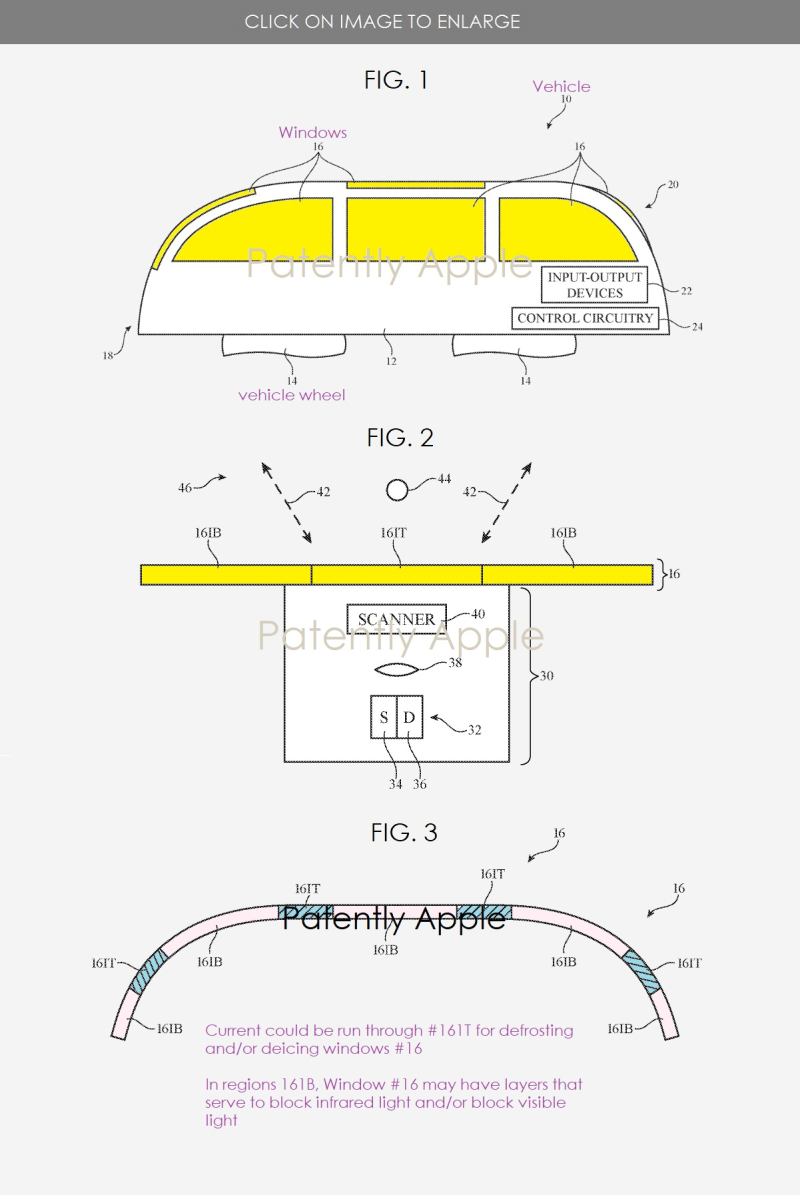 Apple's granted patent 10,827,564 was originally filed in Q2 2017 and published today by the US Patent and Trademark Office. The sole inventor is noted as being James Wilson, Apple's Materials Senior Product Design Engineer.

02: Apple Wins Patent for Vehicle side mirrors that could Project Surrounding road imagery onto Side Windows & Windshield