Today the U.S. Patent and Trademark Office officially granted Apple a patent that relates to a vehicle environment that provides the driver and passengers with a dynamic window system that offers privacy and tinting features.

Apple's patent FIG. 1A presented below illustrates a block diagram of a vehicle system #100 according to an example embodiment. The vehicle system includes a vehicle #102 having a computing device #103 that is in communication with sensors #107 and tinting hardware modules #105.

The sensors may include sensors and imaging devices, among other hardware devices for determining various attributes of the vehicle or occupants. The vehicle may be considered one that transports people and/or cargo including a terrestrial motor vehicle, a watercraft, and an aircraft, among other vehicles. The vehicle may include engines or motors such as an internal combustion engine, an electric motor, or a hybrid configuration.

Further, Apple's patent FIG. 1A below illustrates that the vehicle may include zones #109 that may be shielded, protected, and/or obstructed by any given tinting hardware module #105 or combination of modules in combination with adjustable tinting film #104 covering adjustable exterior facing surfaces. The adjustable exterior facing surfaces may be transparent or partially transparent and may include windshields, windows, a roof, a floor, and other surfaces of the vehicle. There may be occupants #111 located in each zone #109 as noted in FIG. 1A above. The tinting hardware modules may together operate and control adjustable tint film located within an exterior facing surface that shield and protect particular locations and a particular zone within the vehicle. The adjustable tint film has an adjustable absorption level, among other adjustable and controllable variables. 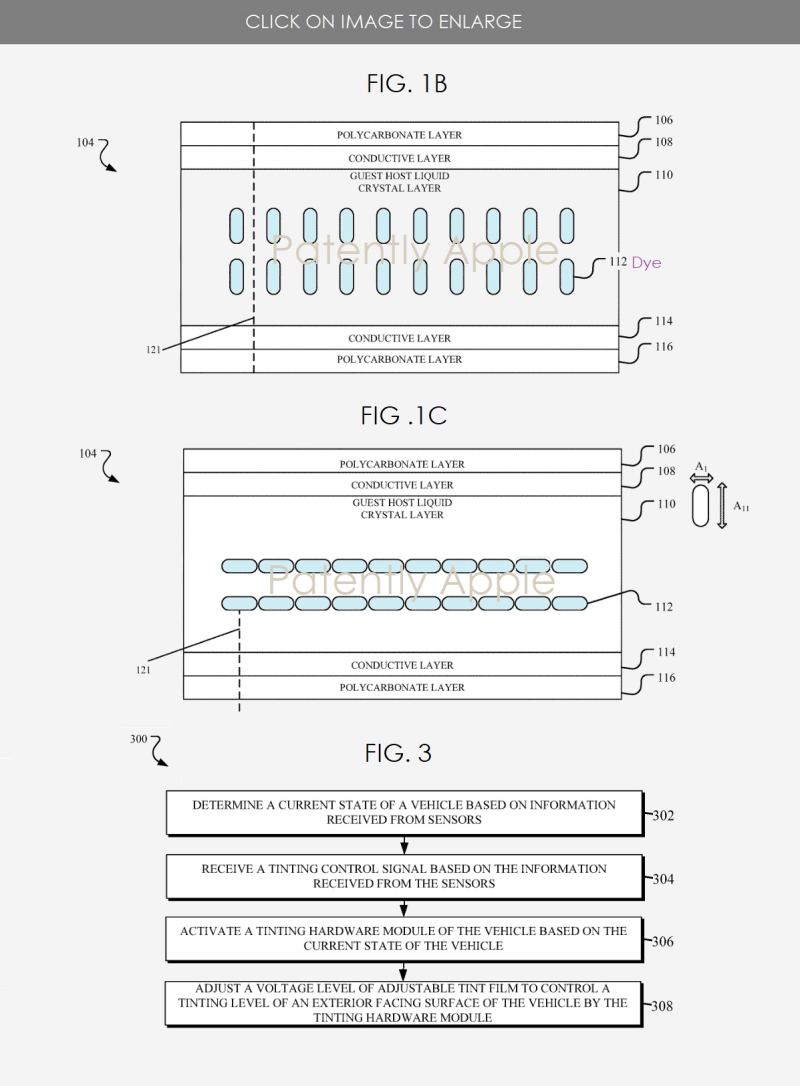 Apple's patent FIG. 3 above illustrates a flowchart for activating and controlling adjustable tint film of a vehicle.

For more details, review Apple's granted patent 10,843,535 that was published by the US Patent and Trademark Office today. Apple was also granted a different patent on this type of feature that we covered in an August 5th report.