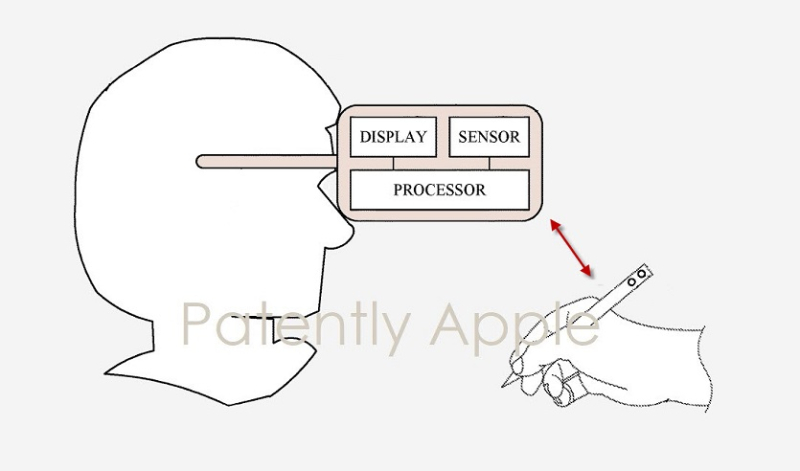 Today the US Patent & Trademark Office published a patent application from Apple covering a future Apple Pencil with a 3-camera system designed to assist next Apple Glasses and/or Head Mounted Device (HMD) map out 3-D environments, act as a tracking device and more.

Apple notes that Head-mounted devices that are an attractive technology for a variety of applications, and can be used to provide an immersive and interactive computer-generated reality (CGR). For example, head-mounted devices can be used to provide VR or MR environments that are responsive to movements of a user in three-dimensional space for purposes such as gaming, video entertainment, and training simulations, among other possibilities.

A system equipped with the ability to track or respond to other movements of the user or environment can provide greater immersion and new possibilities for the user experience.

For example, the ability to track free space movements of the user's hands or other physical objects can allow for three-dimensional manipulation of objects in a CGR environment.

Additionally, or in combination, it would be desirable to provide the user with additional tools with which the user can observe or otherwise interact with the physical environment while wearing a head-mounted device.

According to some embodiments, a system involving a head-mounted device and a future Apple Pencil could be used to track free-space movements of a user.

Such a system can provide a self-contained tracking system that allows a user to freely move the Pencil in three-dimensional space, while accurately transducing the free-space movements of the Pencil without a need for external cameras.

Additionally, or in combination, the Pencil could equipped with one or more cameras to facilitate tracking of movements of the stylus or for gathering additional data from a physical environment around the stylus in order to affect output provide by the head-mounted device.

In some embodiments, multiple cameras may be included in the Pencil, such as one in the body region and one near the tip, so that the Pencil is capable of both observing a three-dimensional environment around the stylus and an interface surface contacted by the tip of the Pencil.

Additionally, or in combination, one or more cameras in the Pencil could be used to track light emitters in the head-mounted device to track a free space position of the Pencil or improve an accuracy of a tracking determination made in combination with other data sources. 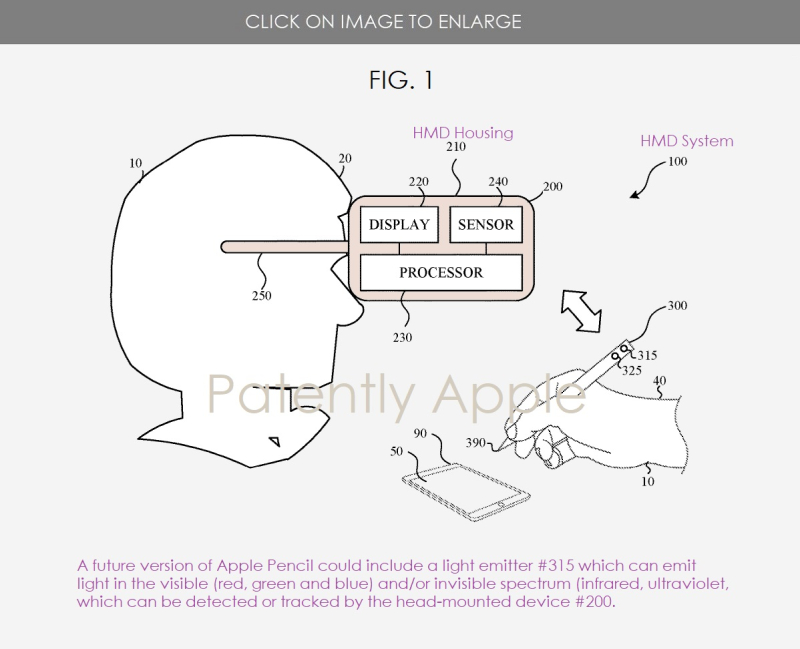 In some embodiments, the head-mounted device #200 could be equipped with a light emitter or other visual target, and the camera and Apple Pencil could be used to detect the light emitter of the head-mounted device. Such information could be used alone, or in combination with other collected data, such as the data gathered by tracking the light emitters. Combining such data can enhance the accuracy or increase the confidence of tracking determinations made by the system #100. 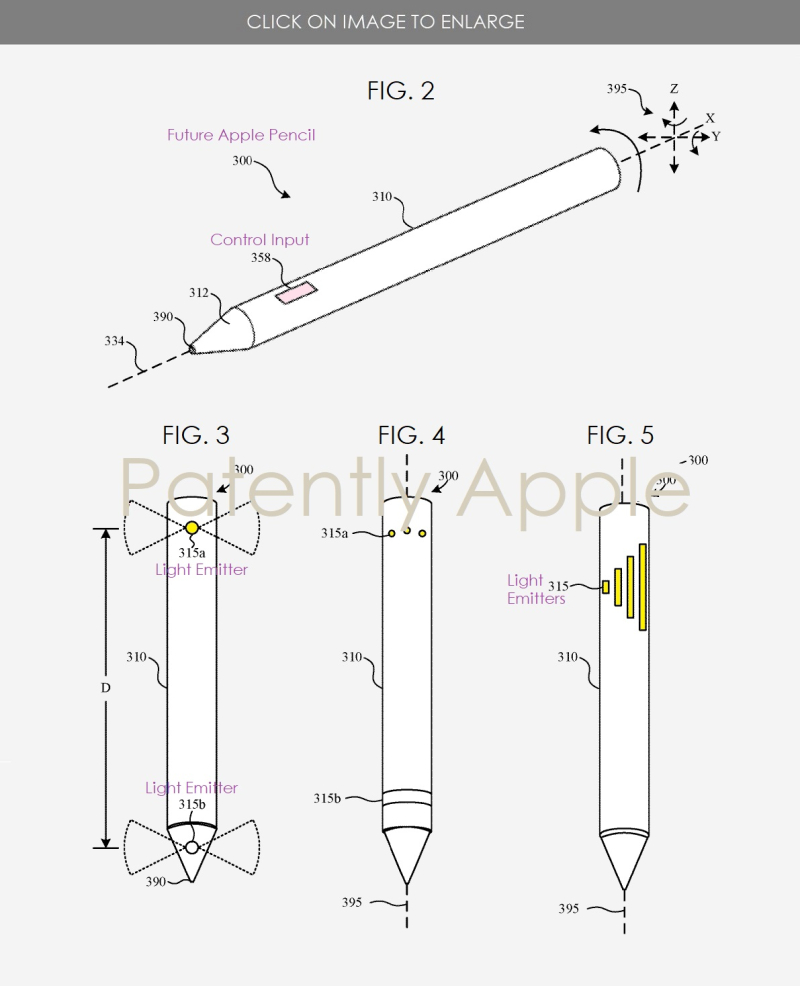 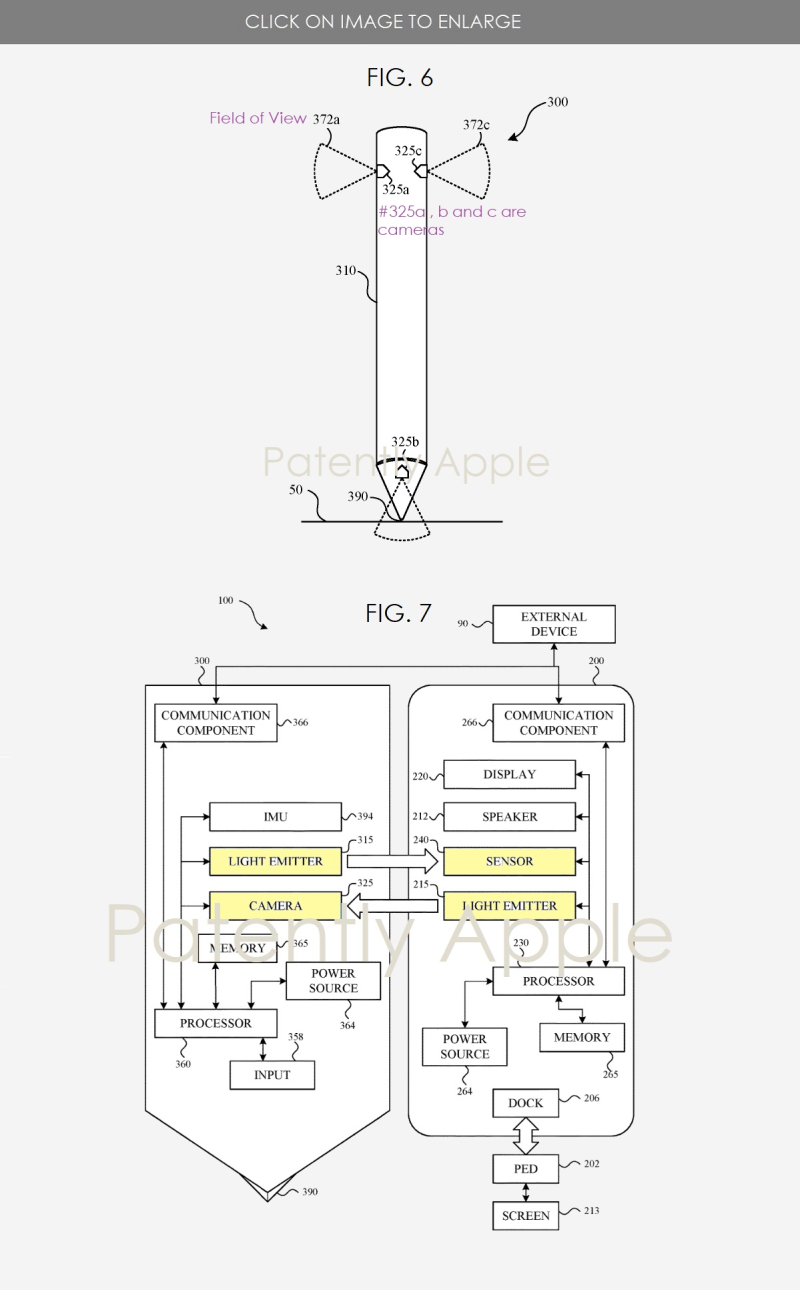 Further to FIG. 6, Apple notes that "the second camera #325b may be used to, for example, track motions of the Pencil as it is moved along or across the surface of a device" that appears to be an iPhone.

Such a camera may track changes seen in the texture of the interface surface of the portable device to determine motion of the Pencil, for example, to implement writing or drawing functionality in a mixed reality environment beyond a single device and across substantially any surface.

Apple's patent application number 20200333891 that was published today by the U.S. Patent Office was filed back Q1 2020. Considering that this is a patent application, the timing of such a product to market is unknown at this time.