Facebook announced a Partnership with Ray-Ban in Delivering Cool Smartglasses in 2021. Well kind of, that is …

On Monday Patently Apple posted a report titled "Facebook wins a Patent for their future Smartglasses in the hopes of beating Apple to Market and Challenging the iPhone." Who knew that two days later that Facebook would sharing more about their future smartglasses that they're claiming will be coming to market in 2021.

The announcement was made by Mark Zuckerberg during Facebook Connect, an annual conference held virtually from California, earlier today. To be clear, Facebook appears to be relying on their new partner EssilorLuxottica for the actual hardware – though Facebook is also providing "technologies" regarding the glasses.

In their joint press release it noted that "The partnership will combine Facebook apps and technologies, Luxottica’s category leadership and conic brands, and Essilor’s advanced lens technology to help people stay better connected to their friends and family.

The first product will be branded Ray-Ban, the world’s most popular eyewear brand, and is scheduled to launch in 2021. It will combine the best of both worlds – innovative technology and fashion-forward style – to create smartglasses that consumers will truly love wearing.

Rocco Basilico, Chief Wearables Officer at Luxottica: "We are especially proud of our collaboration with Facebook, which projects an iconic brand like Ray-Ban into an increasingly digital and social future. Combining a brand that is loved and worn by millions of consumers around the globe with technology that has brought the world closer together, we can reset expectations around wearables. We are paving the way for a new generation of products destined to change the way we look at the world." 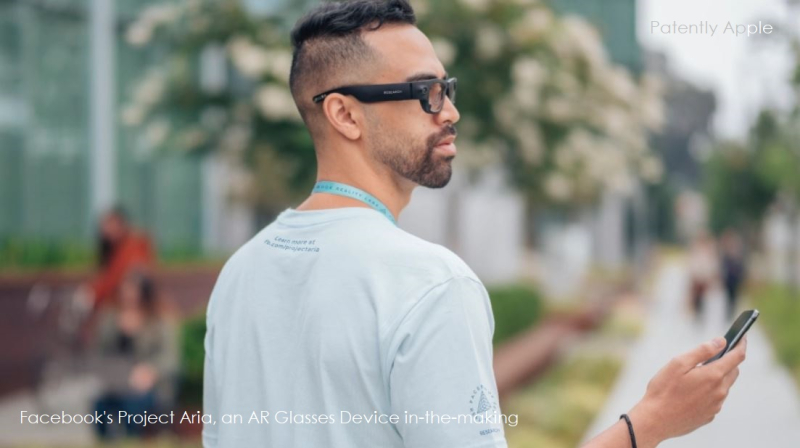 Perhaps it's just me, but how Facebook presented their vision today is a little confusing with two or more press releases that seem to contradict each other, purposely. Yes, Facebook and Luxotica will be releasing a pair of smartglasses under the Ray Ban brand in 2021.

No, Facebook's advanced Project Aria device, the really advanced AR Glasses of the future that we really want, is nothing more than a project device that's not coming to market next year.

In another document released today Facebook notes that "At Facebook Reality Labs, we are building Augmented Reality (AR) glasses that will enhance your surroundings with a 3D layer of useful, meaningful and contextually-relevant information.

And unlike the devices of today that force you to choose between your screen and the world around you, these glasses will blend into the flow of everyday life. Imagine a pair of glasses that let you see better in low light or hear better in a noisy room. If you’re walking in a new city, you could get heads-up directions; if you don’t understand a local language, the glasses could translate the world around you.

We believe this is the next step in the evolution of computing, but in order to build this device, we have to do our homework first."

Elsewhere, Facebook described their Project Aria device as "a visionary research tool." They built this research device that will help them understand how to build the software and hardware necessary for AR glasses.

The Project Aria glasses are not a consumer product, nor are they a prototype. They won’t display any information on the inside of the lens, and research participants cannot view or listen to the raw data captured by the device.

As a research device, the glasses will use sensors to capture video and audio from the wearer’s point of view, as well as eye movement and location data to help our engineers and programmers figure out how AR can work in practice.

The glasses will encrypt, compress, and store data until it’s uploaded to our separate, designated back-end storage systems.

Facebook further states that "From its conception to its implementation, Project Aria was designed as a way to help us innovate safely and responsibly. To help us develop the safeguards, policies, and even social norms necessary to govern the use of AR glasses and future wearable devices, we’re gathering feedback both from people wearing the device and from people who encounter other people wearing the device in public.

And to better understand how this technology can benefit people with varying physical abilities, we’re starting a pilot program with Carnegie Mellon University’s Cognitive Assistance Laboratory to build 3D maps of museums and airports that will have multiple applications, including helping people with visual impairments better navigate their surroundings. The data collected as part of this research will be stored by CMU.

Again, we are not releasing this device to the general public and it won’t be for sale. Starting in September, it will be made available to a limited group of Facebook employees and contractors in the United States, trained in both where and when to use the device, and where and when not to."

Facebook also noted that "Of course, a lot of this is still the domain of science fiction. To actually build glasses flexible enough to work for most face shapes and sizes, and create the software to support them, we still need several generations of breakthroughs, like systems to enhance audio and visual input, contextualized AI, and a lightweight frame to house it all. This kind of AR requires a foundational shift in computing technology that mirrors the leap from libraries and landlines to personal computers and smartphones."

While I hate to be overly critical here, I have to be. This is pure Facebook Hyperbole. It's Vaporware hoping to "one day" become AR Glasses. Once you realize that they're not going to be releasing a  high end pair of AR glasses next-year, then you realize that Facebook is peddling nothing more than feel good dreams for their developers in order to hold their interest.

Apple doesn't hold vaporware concept events to gain customer or developer interest as they deliver products and developer tools ready to use that day. Facebook has little to excite their base with and so their dream making factory went into hyper-mode with smoke and mirrors.

I know that they want to be in a race with Apple regarding AR Glasses, as their patents prove that out.  However, other than dreams on paper, and videos of researchers looking busy, there's nothing for Facebook fans to really sink their teeth into as far as AR Glasses are concerned.

Stating that several generations of breakthroughs are needed to actually deliver high-end AR Glasses put's their Aria Project into LaLa-Land territory with rainbow dust and dancing acorns. One of their engineers spoke of a 5 to 10 year window. Say what?

Memo to Zuckerberg: Vaporware went out in the 80's. Talk about peddling "Fake News." For that, Facebook is definitely one of the hypocritical leaders of our time.

In the end, as a consumer, I have to wonder what it is they're actually going to be launching in 2021. Will they introduce a bare bones smartglasses device aimed for Facebook addicts alone? Only time will tell. Though one thing is for sure: Facebook won't be delivering an iPhone killer anytime soon, end of story.