Apple's Distinguished Engineer Tomlinson Holman who's been with Apple for close to a decade, previously worked at LucasFilm for close to 15 years, was the Chief Scientist at Audyssey Laboratories and was founder of TMH Corporation for 25 years. Holman has provided Apple with technical direction in Audio.

So, with Holman listed as one of the inventors of a new audio patent application about spatial audio, you know that Apple took this very seriously from day one. In fact, it's likely the inspiration behind a host of recent patents on this subject matter and what drove Apple to bring spatial audio to AirPods Pro, next gen over-ear headphones and beyond.

Spatial audio was introduced to Apple fans around the globe at this year's WWDC-20. We specifically covered it our report titled "It was a Historic WWDC Keynote as Apple introduced Macs with 'Apple Silicon' coming to market this Fall & Spatial Audio for AirPods Pro."

"Discover proposed schema and structure updates to the Universal Scene Description (USD) standard. Learn how you can use Reality Composer to build AR content with interactive properties like anchoring, physics, behaviors, 3D text, and spatial audio that exports to USDZ. And, discover streamlined workflows that help you bring newly-created objects into your app." For more on this, view the full session here.

The video below is set to start when Mary-Ann Ionascu, Apple's Senior Firmware Engineer, revealed Spatial Audio at this year's WWDC that's coming to AirPods Pro.

Spatial Audio didn't come out of thin air, it was a project that began in 2017 with Holman and Apple's other engineers listed on today's patent which also includes: Chris Eubank Engineering Manager, Audio, part of Technology Development Group; Matt Connolly, software Engineer and Stephen Pinto (no LinkedIn profile).

02: (2018) Apple Wins Patent for Advanced Spatial Audio for Beamforming Speakers like HomePod, Home Theaters and beyond

Today the US Patent & Trademark Office published a patent application from Apple that relates to the technical field of spatial audio processing in a simulated reality environment.

Apple's patent reveals that "One alternative for producing 3D sound effects in SR environments is to manipulate individual discrete sounds contained in audio objects that can be virtually located anywhere in the 3D environment. Composing audio for SR applications using existing spatial audio formats and objects is difficult since there is no uniform way to access a variety of sound sources and incorporate them into a dynamic SR environment.

Embodiments of a file format for spatial audio as herein described enable augmented SR application developers to compose sounds for use in SR applications in which the audio data that is encoding a sound capable of being composed into a SR application is stored as an audio asset including asset metadata describing not only how the sound was encoded but also how a listener in a SR environment that has spatial audio rendering capability experiences the sound." 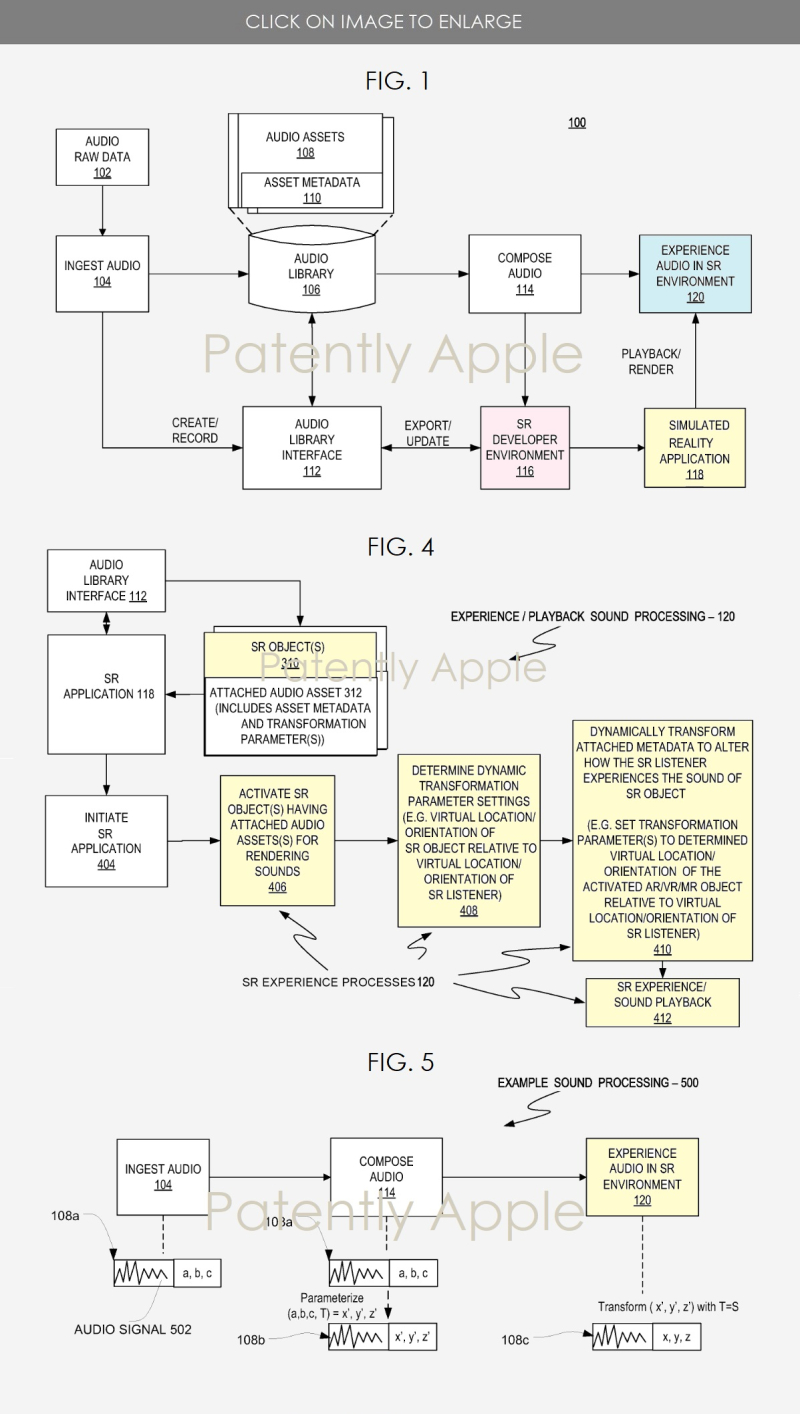 Apple's patent FIG. 5 above is an illustration of an exemplary ingestion, composition and experience of sound processing of audio assets.

Developers and super geeks could dive deeper into Apple's patent application 20200288258 here. Considering that this is about a spatial audio file format that was likely revealed during this year's WWDC-20 training session on spatial audio, this is likely a patent fulfilled.