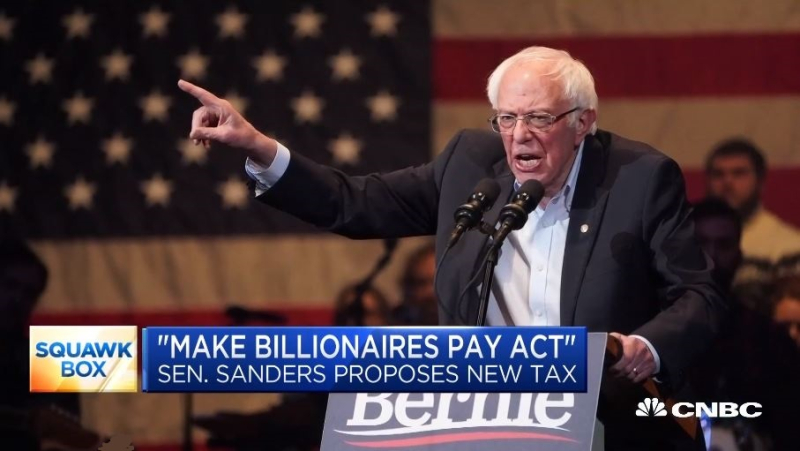 First it was defund the police and now it looks like Democrats, if elected, will be out to punish Silicon Valley billionaires with a new one-time 60% tax under their proposed "Make Billionaires Pay Act." Say bye-bye to capitalism and hello to socialism 101.

Under the new act, Amazon's Bezos would be forced to pay an estimated $43 billion; Facebook's Zuckerberg $23 billion; and Tesla's Elon Musk $28 billion as examples. In New York alone there are 113 billionaires that will be subject to the proposed tax.

Senators Bernie Sanders, I-Vt., Ed Markey, D-Mass., and Kirsten Gillibrand, D-N.Y., on Thursday introduced the "Make Billionaires Pay Act," which would tax tech’s top leaders tens of billions of dollars in wealth made during the pandemic.

Of course while they claim that it's going to be a one-time tax, be serious, it would only mark the beginning of a new wave of taxes beginning the the wealthy at every level of society and extending to every tech company CEO including Tim Cook.

Yet that's only the beginning. Silicon Valley is the new target by many State attorney generals. More specifically, CNBC posted a report yesterday titled "New York proposes antitrust bill that would make it easier to sue big tech.

The state of New York introduced a bill on Wednesday that would make easier for the state to sue companies if they are seen to be unilaterally violating antitrust issues."

Today, New York can’t take action against an anti-competitive move unless two companies are collaborating and conspiring to stifle competition. Those actions typically manifest in price-setting or a merger between two companies. The new law will change the rules of antitrust behavior subject to massive fines. It will be open season on tech companies who don't bow to New York's Democratic Party rule. It's going to be a cash cow for New York.

Senator Michael Gianaris, D-NY., the sponsor of the bill, told CNBC’s 'Squawk Box' on Thursday: "Our antitrust laws are about a century old and were built for a different economy. In some ways, what we’re trying to do is match what the federal government has the power to do."

The 21st Century Antitrust Act is unlikely to pass before the end of the year, as the state senate is currently in recess, but it already has the support of New York’s Attorney General, Letitia James.

"While our state’s antitrust laws remain essential to these protections, we support legislation to strengthen them further to meet the challenges of today’s economy," New York’s Attorney General, Letitia James said.

With New York being in debt for being a sanctuary city, defunding the police, proposing a Billionaire's tax act and now preparing to turn on tech companies with deep pockets for budget relief, we can see why this election matters on so many levels. It's not about Democrat vs. Republican, it's about socialism vs. capitalism: take your pick.