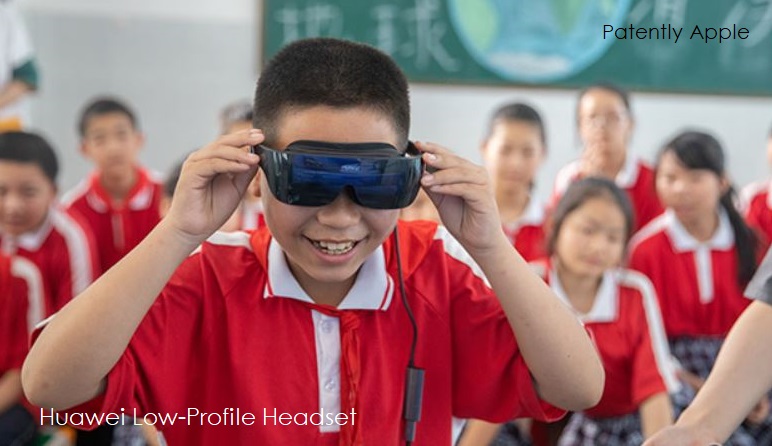 As with most industry trends, some will survive and others quickly fade into the sunset. There are at least two new trends emerging that are worth keeping an eye on going forward. The first trend involves dual display smartphones and tablets. The second trend involves low-profile Head Mounted Display (HMD) devices.

While Samsung and Huawei were first to introduce the new category of devices based on folding a larger single display in half in 2019, the single flexible display has had a string of issues with both the display and the folding hinge. The heavy price tags associated with this type of product only made the issues larger and discouraged most from taking the leap.  While there's no real data on sales for these devices thus far, estimates in the media have ranged from 500,000 to one-million units for the Galaxy Fold. A hit it was not.

Samsung's Galaxy Fold 2 arrives on September first at a special Samsung event and we'll have to wait and see what improvements that they're bringing to the table. What's going to complicate things for Samsung is Microsoft's new Surface Duo smartphone launching days after the Galaxy Fold 2.

The news of Microsoft's Surface Duo smartphone last week was surprising and more so that it was actually launching on September tenth. Microsoft's Surface Duo doesn't follow the  same form factor as the ones from Huawei or Samsung.  Their device is based on two individual displays that are held together with a 360º hinge. It's a clean design that won't have the issues that the other designs have.

Additionally, while Samsung and Huawei have both emphasized multitasking on their cramped single folded devices, multitasking on the Surface Duo has been reinvented from the ground up and there's nothing like it on a smartphone today. The Duo's method of multitasking is miles ahead of competing devices.

In a new 35 minute introductory video for the press that surfaced last Friday, Microsoft's Panos Panay, "Chief Product Officer, Windows + Devices," walks us through their new device and how their multitasking technique works. It's miles ahead of Samsung's Galaxy Fold 1 or 2 in my opinion.

Once you wrap your head around their new feature, you not only see how it could help with productivity, you also see just how addictive this could become.

Later in the video, Microsoft shows us how the Surface Duo can easily be in sync with a PC the second that the smartphone sits near a PC. Having the Surface Studio desktop is a clear advantage with its touch-screen. That combination is a real winner for multitaskers. Lowering the desktop display, as seen in the photo below, does away with the potential for Gorilla Arm allowing it to be quite natural for certain types of work. 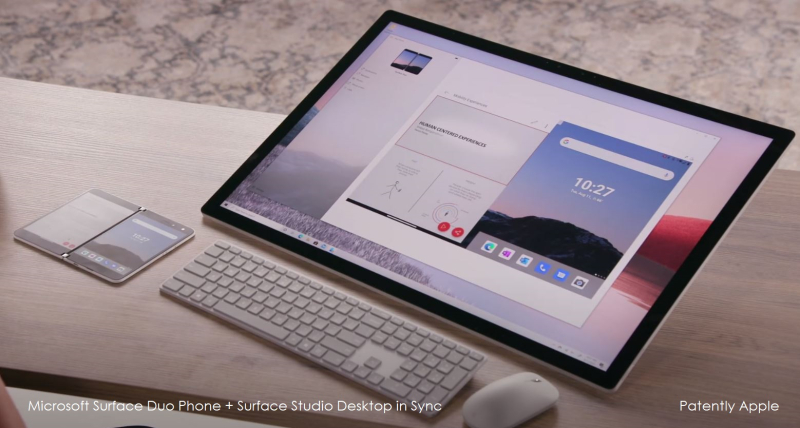 Patently Apple's Flexible, foldable & Scrollable patent archive shows us that Apple has both single foldable displays and dual display iPhone designs on record. Seeing what Apple is bringing to iOS 14 and iPadOS you can somewhat image what Apple would be able to bring to a dual display iPhone in the future, should Apple decide to pull the trigger on this form factor. 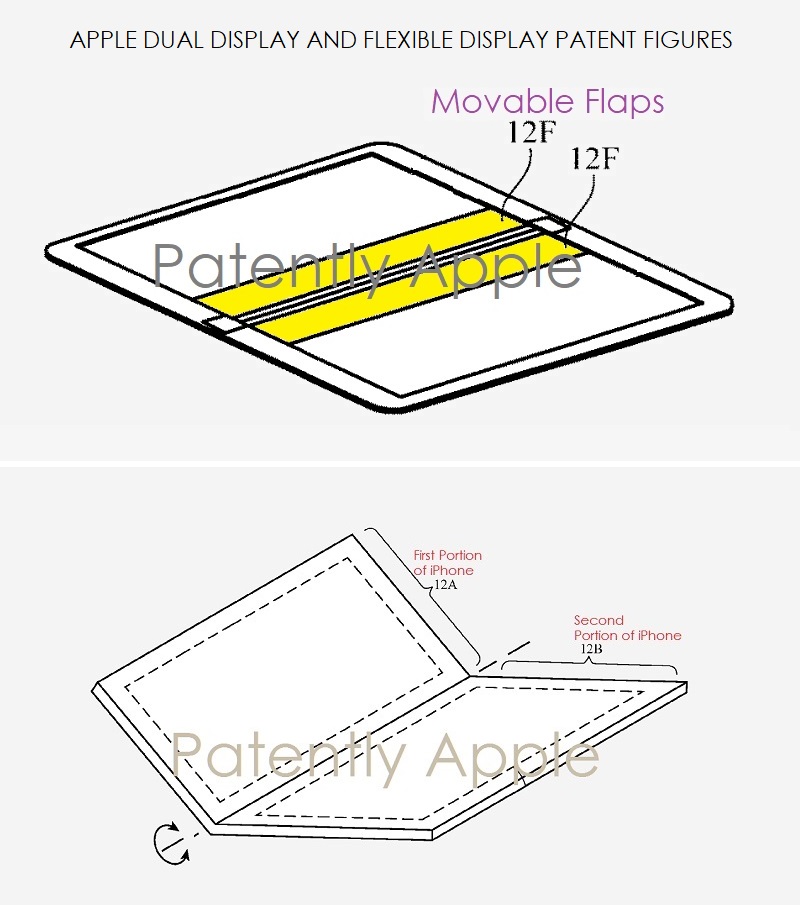 While there's no doubt that Microsoft has the clear lead over Apple on the dual display smartphone front at the moment, once costs of such devices drop to the $999 range, it's very likely that Apple may decide to enter this segment of the market.  It's a trend that I think could gain popularity with professionals, teachers, college students and individuals that in general want to take multitasking to the next level.

Over the weekend I discovered a Samsung design patent that's for a next-gen low-profile headset and a Huawei initiative where classes in China are experimenting with a similar low-profile VR headset. More than likely it's Samsung copying Huawei's design.

Huawei has published information on experiments at one school in China. The webpage is titled "Technology opens up new horizons for children in Peng'an, Sichuan." It's part of Huawei's initiative called TECH4ALL.

Their marketing states: "Huawei believes that no one should be left behind in the digital world, so we developed TECH4ALL – our long-term, digital inclusion initiative for using technology, applications and skills to empower people and organizations everywhere." In one of the videos in the article you could see Huawei's new low profile HMD which is like the Samsung design further below. 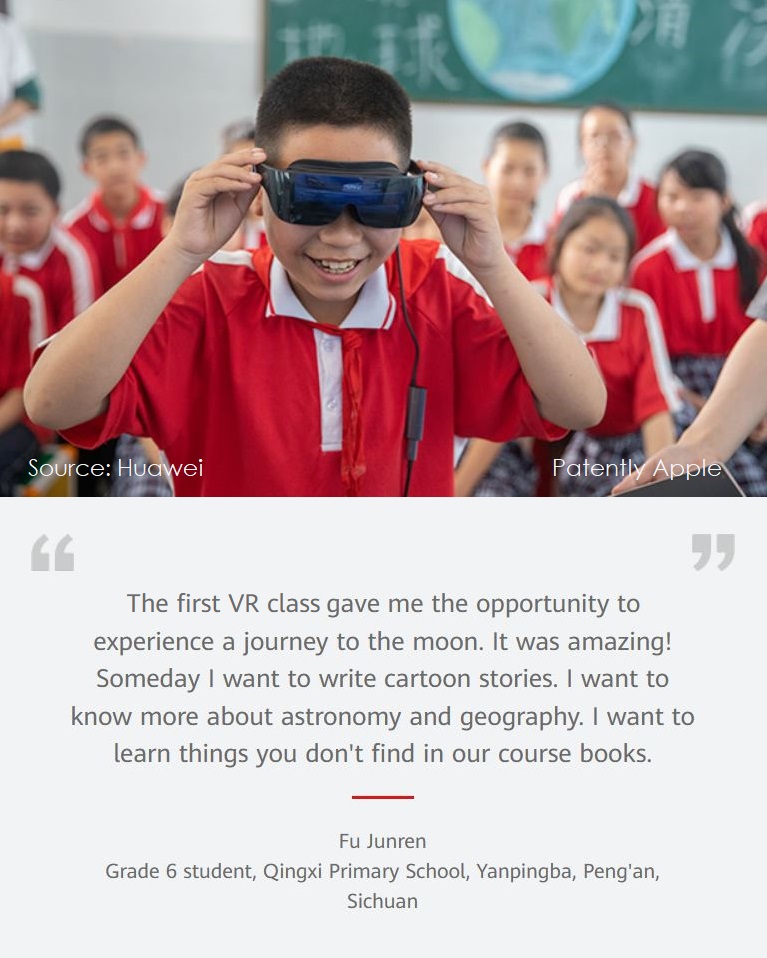 The design as shown above is in between a full VR HMD, like the Oculus, and VR smartglasses. Samsung's design patent D892,790 presents patent figures as shown below.  Unfortunately design patents don't provide us with any specifications for the proposed headset. Though it's clear that Samsung is trying to match the latest design from Huawei. 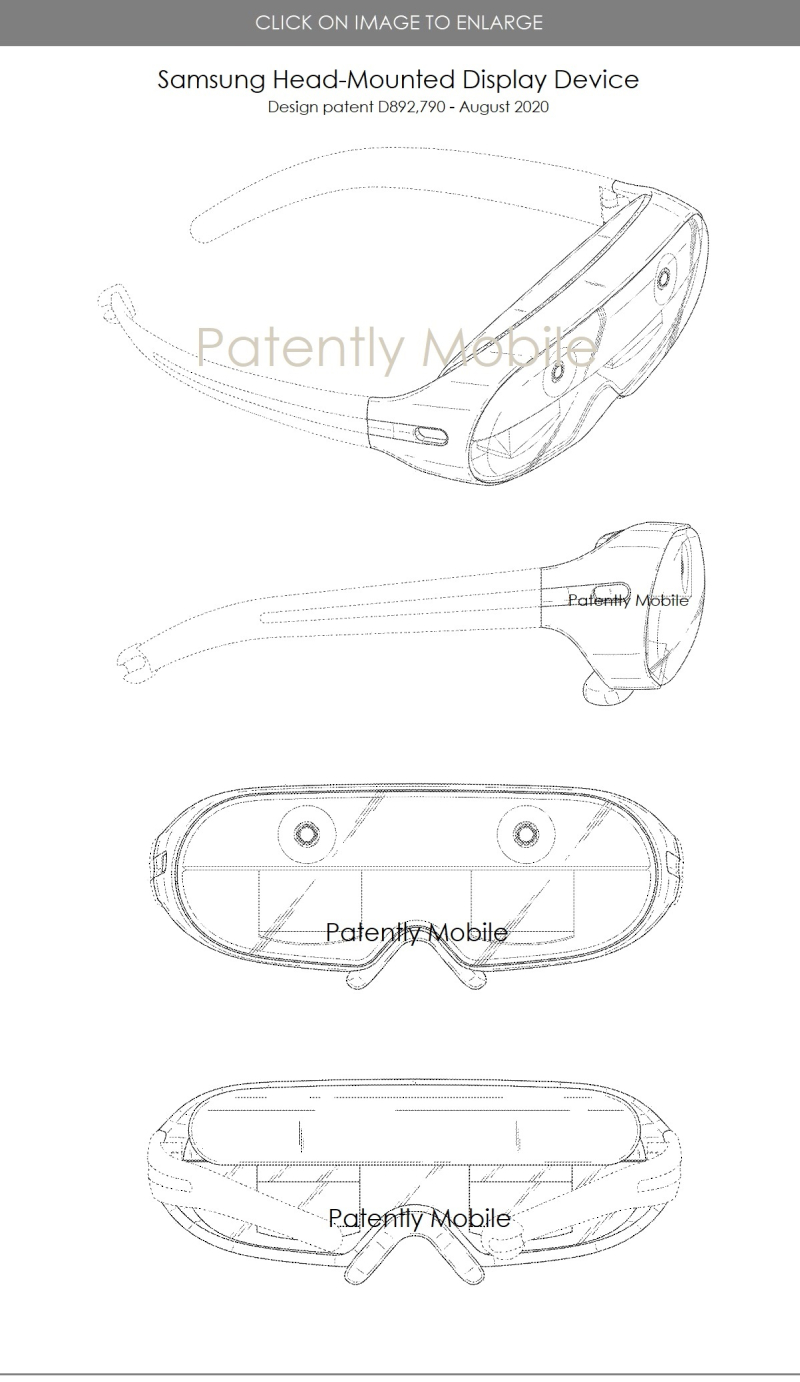 We recently learned that Apple had been working on two types of future headsets. The first being a high-end HMD while the second being an AR Glasses form factor that could be modular in nature. A hybrid low-profile design could be of interest to Apple for the education market, but for now, it's Huawei that has the lead on this trend. 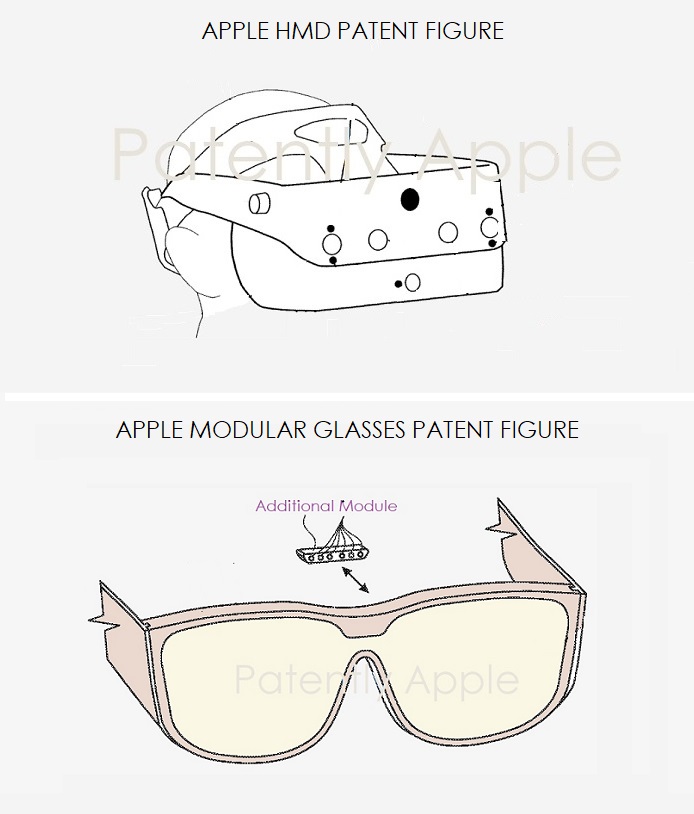 In the end, dual display smartphones from Microsoft arrive on September tenth. Their dual display tablets, branded as 'Surface Neo', arrive in late 2021. The latter is likely to be priced in the range of a high-end notebook. This is definitely a trend to watch for over the next few years. While neither are likely to be mass market devices, as premium devices they should do well.

If Microsoft is trying to show the public that they could be as innovative as Apple could, I think they're making a dent. The Surface Duo is the first device that illustrates that they're able to bring an original device to market that brilliantly combines hardware saviness and software smarts in a powerful new way. Their new user interface for multitasking is brilliant and the fact that they've brought pen input into a smartphone ahead of Apple is another feather in their cap.

I'm a fan of competition and Microsoft's new dual display smartphone is one that could push Apple and the industry forward which benefits us all.

As far as headsets are concerned, both Huawei and Samsung show that they could build new devices, but fall short when it comes to developing great software to drive the new devices to make them become mainstream products.

For that, we'll need Apple, who understands consumers better than most. Unfortunately there's still no tangible proof of when Apple will be bringing their Glasses product to market. Some rumors have forecasted that that they'll arrive sometime in 2021 while others still think this could take much longer.

For now, dual display mobile devices and new low profile HMDs are two of the most plausible trends to watch for going forward.