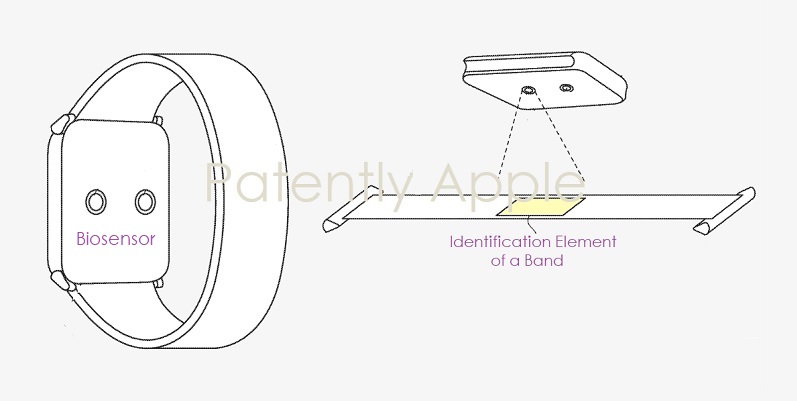 Yesterday the US Patent & Trademark Office published a continuation patent from Apple that relates to possible future Apple Watch Band features on a day wherein Amazon stepped into the fitness band arena to challenge the Apple Watch with their new 'Halo' band and pay-for membership service.

Apple's invention relates to the identification of specific Apple Watch bands that automatically triggers added functionality to Apple Watch once the invisible band ID has been scanned into the system by using the PPG sensor of the watch.

There will be several specialty bands made available for Apple Watch catering to those wanting or needing to measure specific health metrics that serve both athletes and the general public. Apple notes that "a user's experience with the electronic device can be enhanced based on the user's selection of a particular band."

In Apple's patent FIG. 2 illustrated below, we're able to see the band #110 including an identification element (#190) that is detectable by one or more components of the Apple Watch; For FIGS. 3 and 4, the Apple Watch may also include one or more biosensors (#124) positioned substantially anywhere on Apple Watch, though shown at the bottom of the watch. Biosensors may be configured to sense substantially any type of characteristic such as, but not limited to, images, pressure, light, touch, force, temperature, position, motion, and so on. 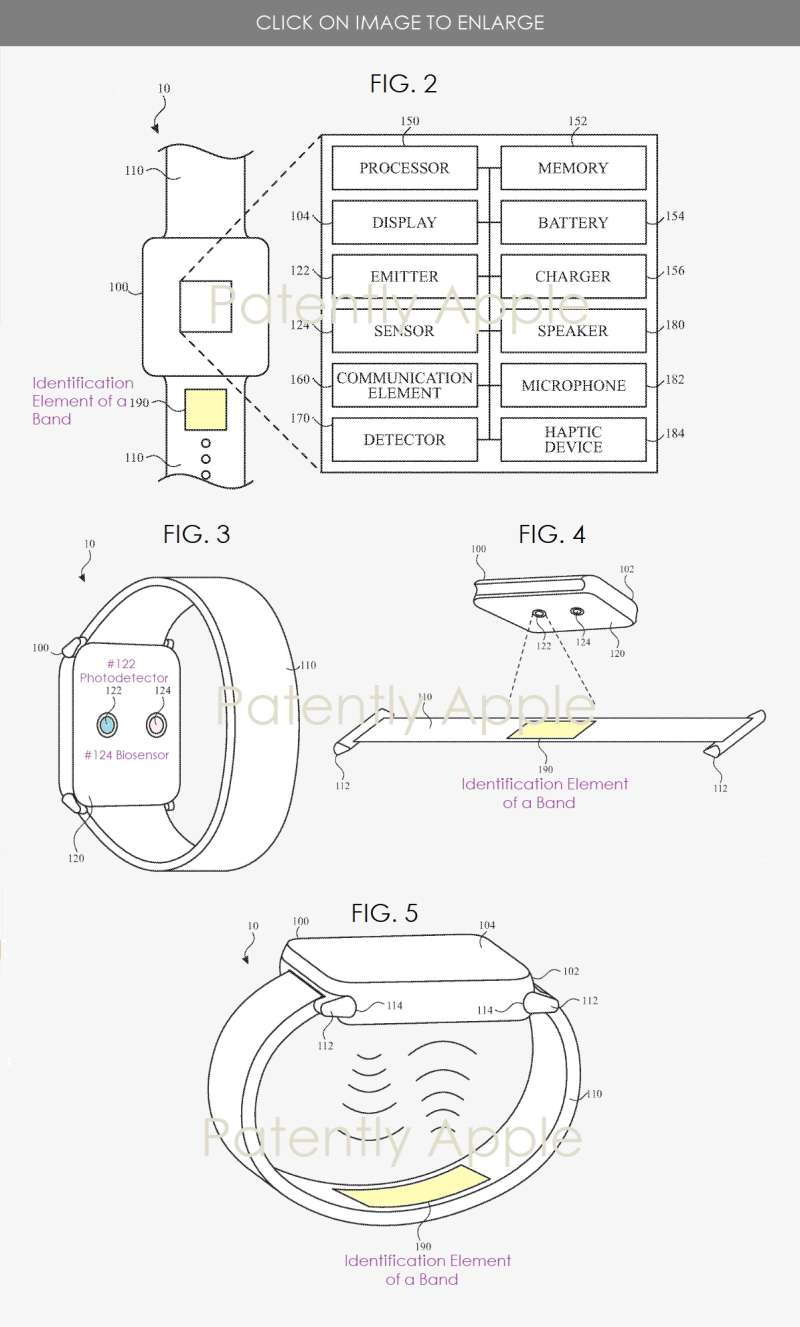 Further, the optical (e.g., PPG) sensor or sensors may be used to compute various health metrics including, without limitation, a heart rate, a respiration rate, blood oxygenation level, a blood volume estimate, blood pressure, or a combination thereof.

In patent FIG. 5 shown above, Apple watch can detect an identification element (#190) of a band by using a sensor that applies a communication protocol. Apple Watch can employ NFC, RFID, Wi-Fi, Wi-Fi Direct, WiGig and more.

Apple's patent published yesterday is not a new invention application but rather a continuation patent wherein Apple is updating and/or adding specific technology, features and/or methods that they want to legally extend into their current granted patent. Any change and/or addition to this invention is restricted to Apple's patent claims.

So, What's New for this Invention?

Patently Apple covered this invention as a granted patent in a report published on June 23rd. If you missed this report or want to review more details you could check it out here.

Apple's original granted patent in June focused its patent claims, the heart of the invention, toward (1) "a wearable device" and what it comprised of, in the first 4 claims, followed by (2) six claims about "the method" of the device, and finally, (3) 5 claims pertaining to what the "watch is comprised of."

Specifics relating to the all-new segment of Apple Watch claims "A System comprising of" are the following claims in full:

The next important additions were found in the "method" segment which included the following 8 claims beginning with claim #13:

If you're interested to read the 6 claims relating to "The Watch" segment, review the claims in full here.

Apple's continuation patent that was published yesterday by the U.S. Patent Office was originally filed back in May 2020. Considering that this is a continuation patent, the timing of such a product to market is unknown at this time.