On Thursday a new Apple patent was published in Europe titled "Enabling Interactive Service for Cloud Rendering Gaming in 5G Systems." The original International filing was made on February 06, 2020 and published this week in Europe. As Apple is preparing to launch their first 5G iPhones in October, it's great to see that Apple has been working on 5G interactive cloud gaming.

The patent states that "One potential use case for network controlled interactive service in fifth generation (5G) wireless communication networks is cloud rendering game. Cloud gaming, (also known as gaming on demand) is a type of online gaming that allows direct and on-demand video streaming of games onto different computing devices through the use of a thin client.

The controls and button-presses from the user’s computing device are transmitted to the server, where they are recorded, and the server then sends back the game's response to the input controls. Current 5Gs system lacks the capability to provision interactive services for cloud rendering gaming in efficient and optimal manners."

The patent lists out the 4 issues related to 5G interactive gaming and Apple's 4 solutions as follows in-part.

Issue 1: The cloud rendering gaming is an on demand service. Efficiently and optimally managing network resources for provisioning the interactive service may require high demanded bandwidth and low latency, and as such, the 5G system may need a mechanism for access control and service authorization.

Issue 2: To meet the stringent key performance indicators (KPIs) for provisioning interactive service in cloud rendering gaming, the usage of Edge computing may be needed as indicated in clause 5.13 in Third Generation Partnership Project (3GPP) TS23.501 (System Architecture for 5G system). For a Cloud Rendering Server as an Application Function (AF), the AF may request to infer a user plane route and steer a particular traffic flow with required quality of service (QoS) to local area data network. However, interactive services may be sensitive to the route changes, and the user may be at the risk of a service interruption and affect the required KPIs. Thus, a mechanism in 5G system may be needed to reduce the frequency or probabilities of route changing caused by load balancing.

Issue 4: For the interactive services, the UE transmits, in the uplink, commands that a user has given to control the game (using a remote control or by pressing buttons). This information may normally be sent in small packet size, but may require high reliability and low latency. It is desirable that the 5G core network (5GC) handles the packets containing the commands to control the game.

Apple's Solution 4: For the interactive services, the UE 301 may need to transmit, in the uplink, the commands that a user has given to control the game (using remote control or pressing buttons). This information is normally with small packet size but requires high reliability and low latency.

Each of the abbreviated solutions were further expanded in greater detail in the patent filing.

It would appear on the surface that Apple may have acquired this patent as the PCT number at the USPTO Public Patent Application Information Retrieval system acknowledges the patent but doesn't list any company having ownership of the patent. The inventor Ching-Yu Liao couldn't be found in LinkedIn as an Apple Engineer, though he may have simply chosen to not make his profile public.

This patent now owned by Apple is highly technical discussing networking issues that only someone in that field could actually follow. Apple's patent filing WO 2020/163635 was made public on Thursday as shown in the graphic below. 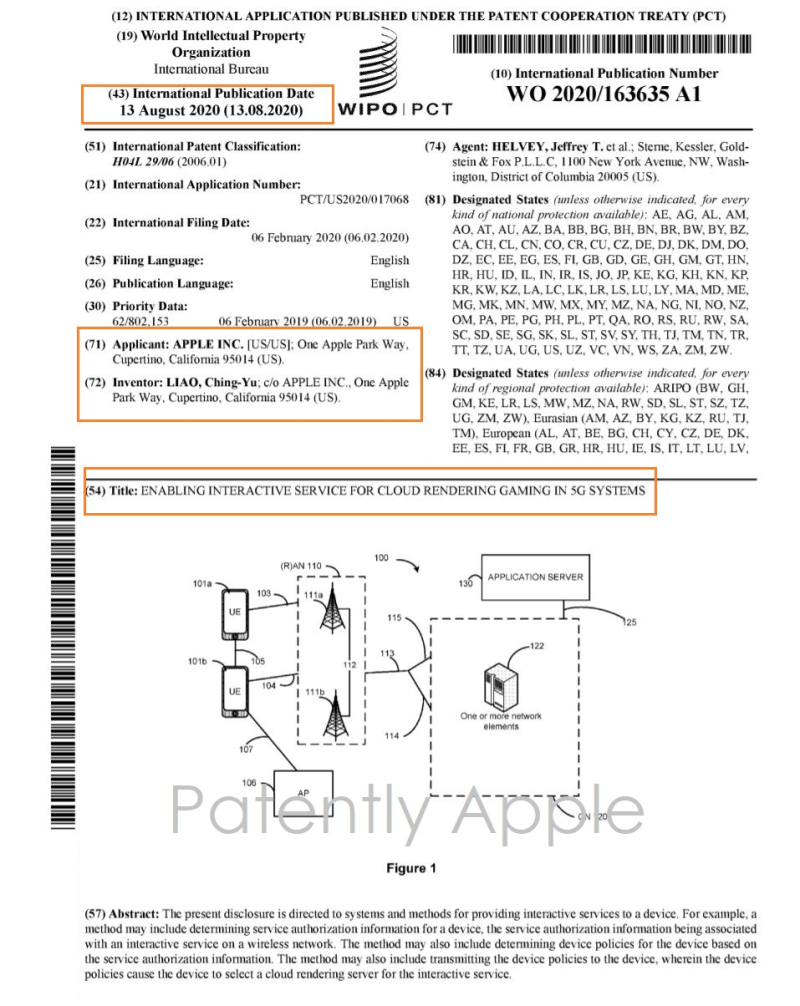