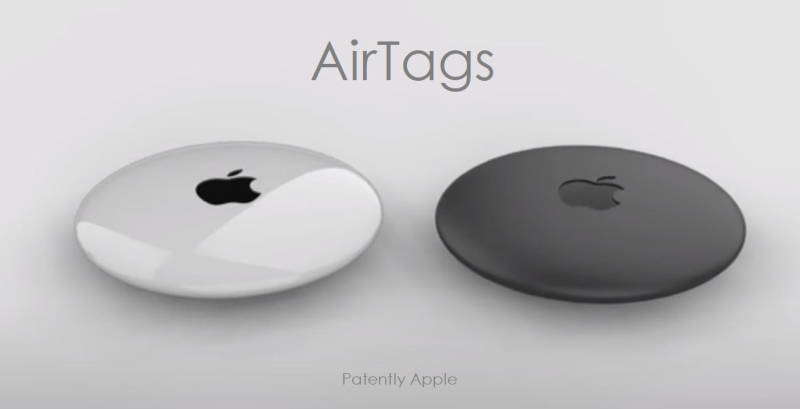 Yesterday Patently Apple posted a report titled "The Antitrust Hearings against big tech will drop the Hammer next Month with a finding that all Players investigated abused their Market Power." We noted in the report that Representative David Cicilline, the Democrat leading the high-profile investigation into technology giants stated that Google, Apple, Amazon and Facebook are abusing their market power to crush competitors and that Congress must act urgently to rein them in to protect consumers. Cicilline further stated that "All of these companies engage in behavior which is deeply disturbing …"

Apple didn't get a pass from Cicilline and one of the companies that testified against Apple was Tile. Back in April Patently Apple posted a report titled "Bluetooth Tracking Company Tile Inc testified against Apple in Congressional Hearing Today." Tile told the congressional panel that Apple was interfering with their apps ability to properly function and was doing this because there were indications that Apple planned to update its Find My product, adding hardware, so it would be a competitor to Tile.

One of those indications came to light today in the form of two Apple patent applications published today by the US Patent & Trademark Office. The patent relates to wireless communications, including techniques for the design and operation of a multi-interface radio frequency transponder device (or "tag").

Positional tags, such as electronic tracking devices, have created numerous ways for users to track locations of associated people and/or objects. For example, global positioning system (GPS) technology can be used to determine the location of a tagged object associated with a person, and the location can be communicated to another device. As a further example, a positional tag could be attached to an item of importance (e.g., keys, wallet, briefcase, article of clothing, backpack, computing device, item of identification, and so forth) and via communication with a companion device (e.g., phone, tablet, laptop computer, Internet of Things (IoT) device, and so forth), the positional tag could update the location of the item of importance and help with recovery if the item is missing.

Apple states that current systems suffer from one or more disadvantages. Traditional positional tags (or tracking devices) and corresponding systems typically suffer from one or more disadvantages. For example, communicating with a positional tag outside of near field communications requires, relative to the form factor, a considerable amount of power. Thus, battery life of positional tags is often limited. In addition, long-range communication for such a device is relatively expensive and often requires sophisticated circuitry for operating in connection with an associated electronic device (e.g., a mobile device). Additionally, low-power options for positional tags are often limited to communicating with nearby objects that may require a user associated with the tracking device(s) to be within a close proximity (e.g., near field) of the positional tags, limiting the usefulness of such devices. 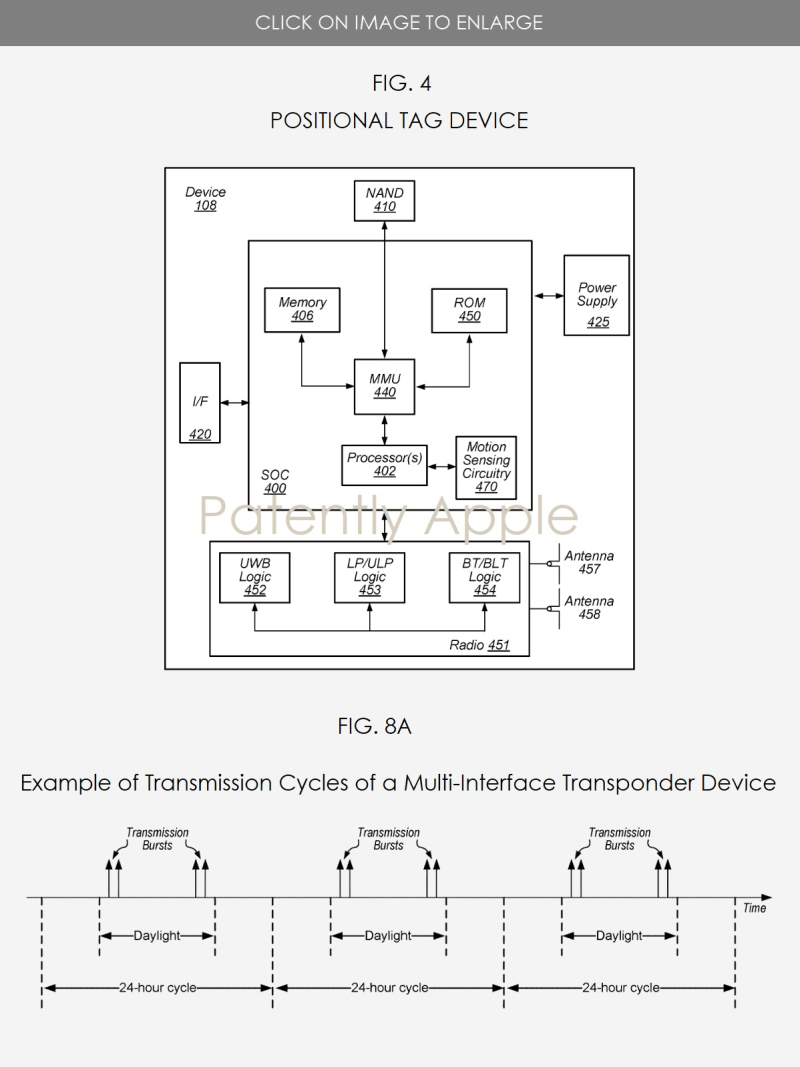 Apple's patent FIG. 8A above illustrates an example of transmission cycles of a multi-interface transponder (MIT) device.

Apple defines a "lost device" this way: "in some embodiments, a multi-interface transponder (MIT) device, e.g., such as positional tag device (FIG. 4 above), may determine that it is lost, e.g., based on a duration of time since a last communication with a companion device.

In some embodiments, the determination may be further based, at least in part, on a duration of time since a location update and/or receipt of a signal from a device associated with a location server.

In some embodiments, operating in the lost mode may include the MIT device altering and/or adjusting transmission power and/or transmission rates to further conserve battery power and increase the probability of discovery. For example, transmission rate may be based, at least in part, on time of day as illustrated by FIG. 8A. As shown, the MIT device may transmit beacons at a higher rate during portions of daylight, e.g., when it may be more likely to encounter a neighboring device.

The first patent application 20200275369 covering future Apple AirTags is titled "Multi-Interface Transponder Device - Altering Power Modes." It was filed for in February 2020 and published today by USPTO. Some original work is noted as being done in Q1 2019.

Both of these patents are highly technical and could be enjoyed by wireless engineers (and Apple's competitors). You could review patent 1 here and patent 2 here.

Considering that Tile filed a formal complaint before the Judiciary Committee’s antitrust subcommittee that Apple was about to harm their business, we have to wonder if the committee's findings, being released next month, could actually warn Apple not to launch AirTags that would cripple the Apple developer Tile.

To finish our report, we're providing you with a video explaining AirTags. While iMore's video is more technical, the video chosen below happens to mention the company "Tile" and explains why Apple's design is vastly superior which is in context with this report.

The second video below is a concept video of how Apple could market AirTags. Of course Apple won't market it that way, but the video was shot on an iPhone 11 by a Korean Apple fan G. Lee. – so why not promote it for this report.