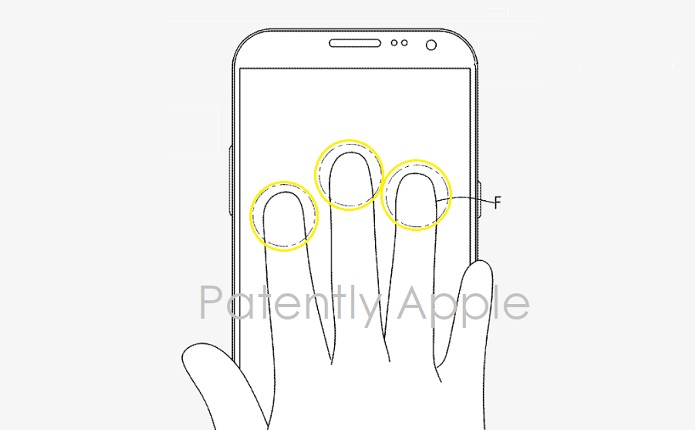 In the last year Patently Apple has posted at least six patent reports covering Apple's Apple's under-display fingerprint ID technologies for a future iPhone (01, 02, 03, 04, 05 and 06) that many believe will debut on this year's iPhone 12. Which technology or combination of technologies Apple may finally decide on is unknown at this time.

With Apple's first implementation of Touch ID on iPhones, the fingerprint recognition was done by placing a finger on the Home Button. With the new under-display version, Apple may introduce a specific designated area on the display where user's could place their fingers on or may allow user's the ability to place their designated finger anywhere on the display. More than likely Apple will provide a single designated area, but Apple has shown it either way.

Earlier this month a patent application from Samsung published by the U.S. Patent Office presented yet another under-display fingerprint ID system. Although Samsung has many of these types of patents on record regarding this technology, a unique invention was presented this time around.

Samsung's patent illustrated that they'll create a new fingerprint ID system that a) will first illuminate an area on the display, when a user first turns on their smartphone, to guide them as to where the fingerprint ID area is for them to rest their finger(s); b)  allow a user to place 3-fingers on the display area that is in theory triple the security; and c) allow a user to register a custom design or scribble unique to them as the user's ID signature as noted below in Samsung's patent figures. 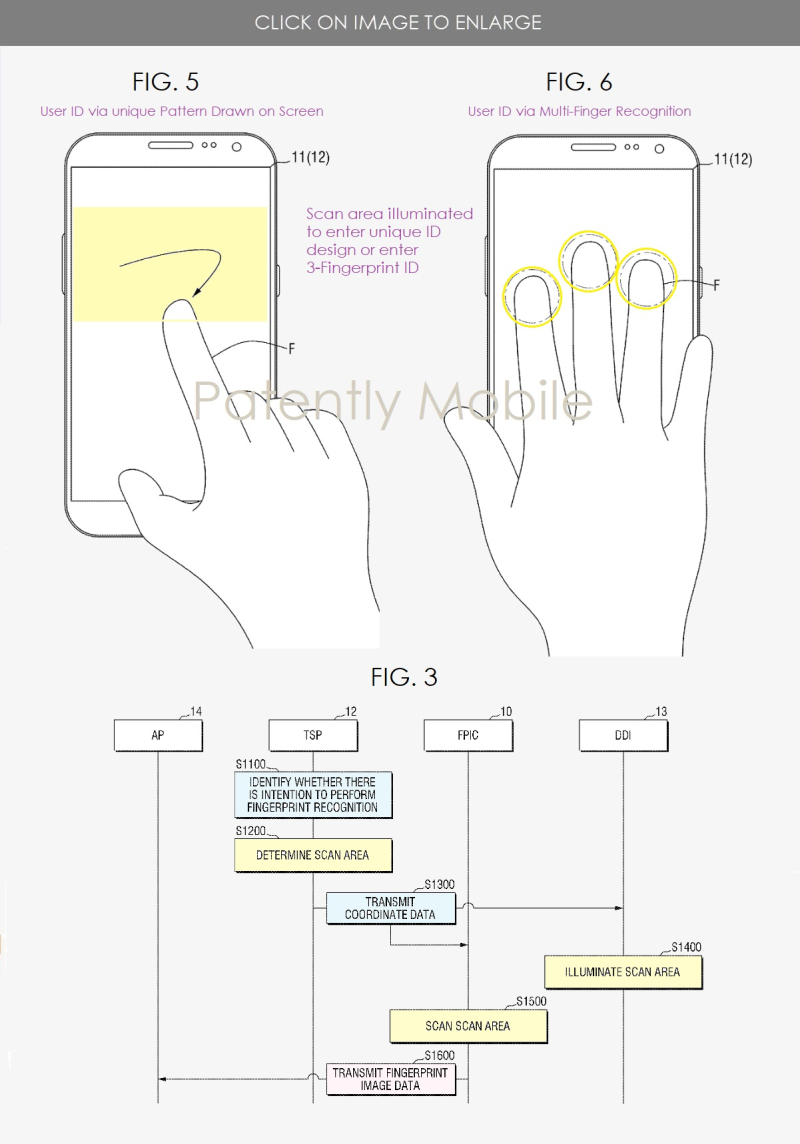 Samsung also clarified patent FIG. 6 by noting that "when three fingers simultaneously touch the display, it may be determined that there is the intention to perform fingerprint recognition. In exemplary embodiments, the pattern may correspond to less than three fingers F or more than three fingers.

Patently Apple added a "Scan Area" in patent FIG. 5 in yellow highlight because later in the patent filing Samsung describes a designated scan areas as follows:

Samsung's patent was first filed for in Korea in January 2019 and then filed in the US. In August 2019. Although Samsung could theoretically introduce this  with the next Galaxy smartphone, going from patent to execution doesn't always follow logic. While such a feature would distinguish the Galaxy smartphone with a  superior fingerprint ID system, only time will tell if and when this comes to market.

Other smartphone OEMs like Huawei offer their users of higher-end smartphone with a choice of ID systems, such as fingerprint and facial or Iris, Apple has limited it to one or the other. The iPhone 12 may be the first iPhone offering users two distinct methods for authentication. I find at night that Face ID isn't always reliable, in fact for me, rarely available so a next generation Touch ID solution will be appreciated by some.

Whether Apple will update Touch ID to include a multi-finger option is unknown at this time, but it could be something to consider for the future to be sure as it's likely to become an industry trend.