Koss, an American Pioneer in Headphones, has filed a Five-Count Patent Infringement Lawsuit against Apple 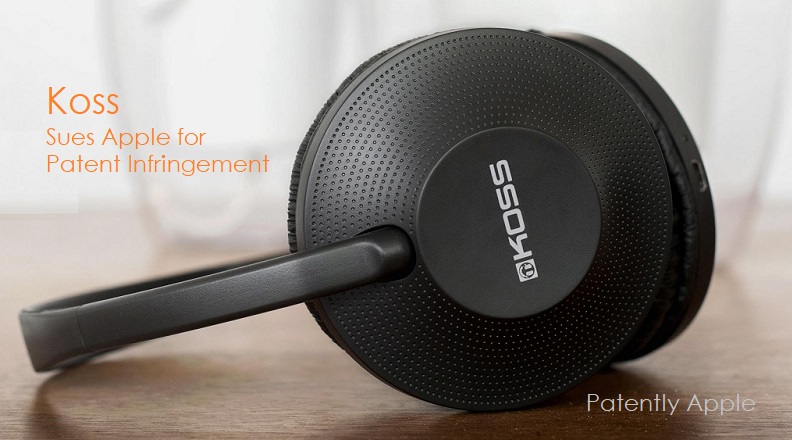 Koss Corporation, who invented the first high fidelity "stereophones" has filed a five-count patent infringement lawsuit against Apple. It's no secret that Apple is about to launch over ear headphones and Apple's success is going to be bad news for Koss. With that said, Koss states that "Apple and others are reaping enormous benefits due to John C. Koss’s vision, and Koss Corporation’s commitment to that vision, for more than six decades." After four meetings with Apple and making it clear that their audio products were without a doubt infringing on Koss patents, it was clear that Apple wasn't going to admit infringement.

They later state in their court filing that "Koss has been damaged as a result of the infringing conduct by Apple. Thus, Apple is liable to Koss in an amount that compensates it for such infringement, which by law cannot be less than a reasonable royalty."

Koss begins their lawsuit playing up their historical legacy of audio innovation. It's certainly going to be something that Koss is hoping will play well to a jury.

Koss starts by stating that "Koss was founded in 1953 as a television rental company in Milwaukee, Wisconsin.23. In 1958, John C. Koss invented the world’s first SP/3 Stereophone as part of a "private listening system" that would enable the wearer to listen to a phonograph without disturbing others in the vicinity: 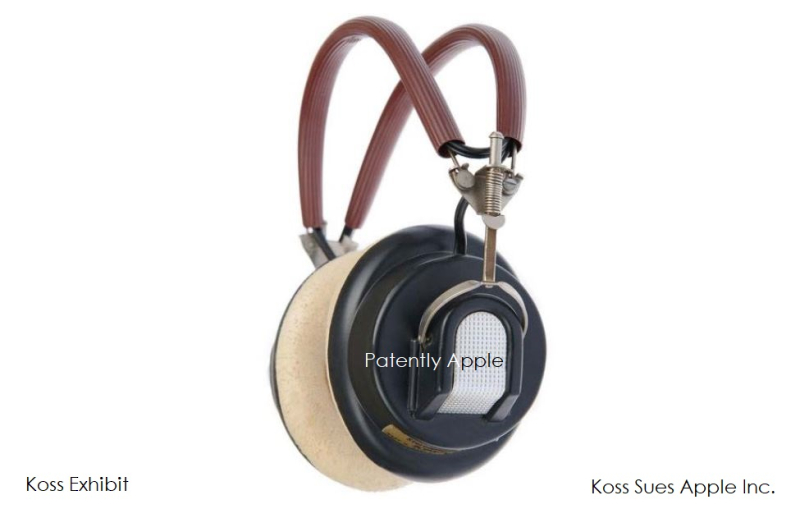 The SP/3 Stereophone provided, for the first time, a high-quality stereophonic headphone that approximated the sounds of a concert hall.

John C. Koss demonstrated the SP/3 Stereophone at a Wisconsin audio show in 1958. Initially designed to demonstrate the high-fidelity stereo sound that a portable phonograph player delivered, these revolutionary SP/3 Stereophones became the hit of the show.

The SP/3 Stereophone has since been enshrined in the Smithsonian Museum’s collection in Washington, DC, with John C. Koss delivering the SP/3 for enshrinement along with an explanation of the story of the SP/3 in 1972: 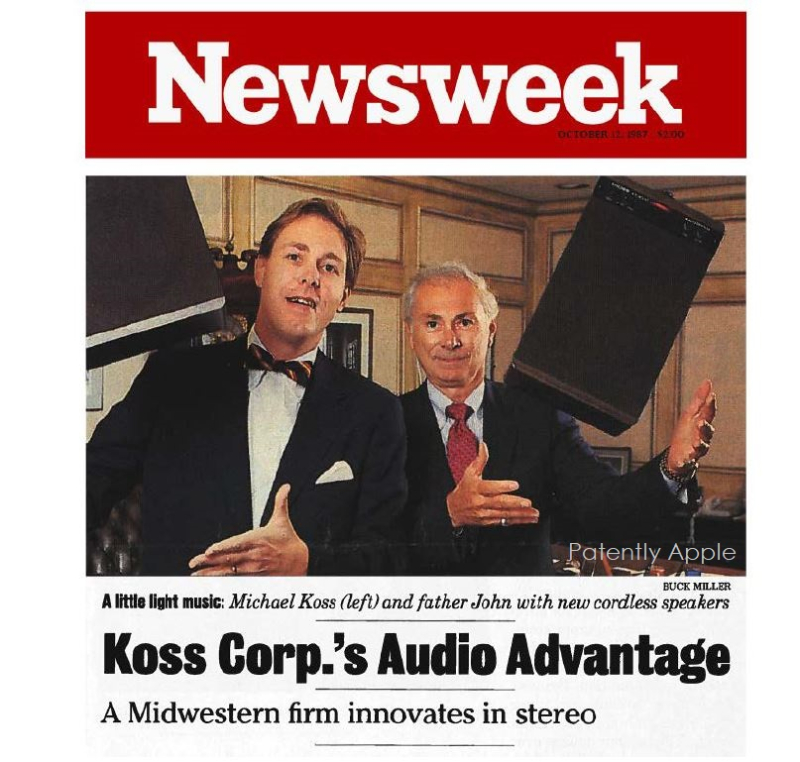 Koss basically lays out their entire long history and their products from the beginning right up to today. It's clear that Koss was one of the pioneers in the audio business. 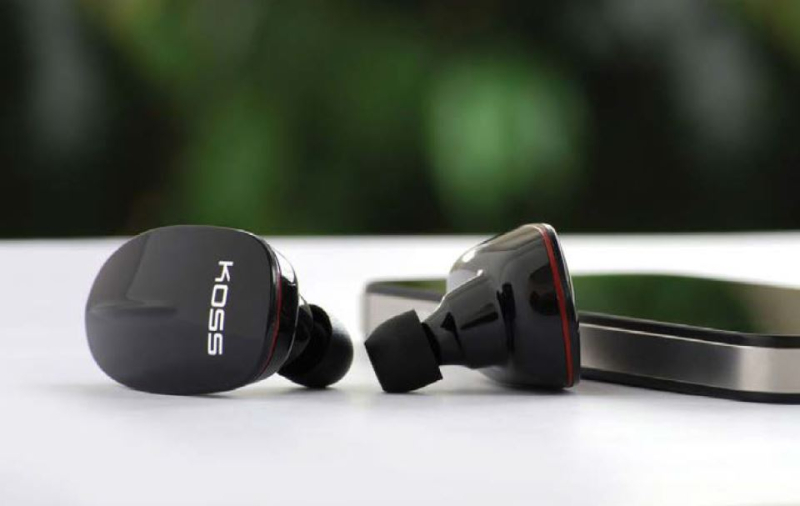 In closing their introductory case, the get down to the bottom line. "Koss brings the instant lawsuit because the industry has caught up to Koss’s early-2000s vision: the technology Koss developed as part of its substantial Striva investment has become standardized, with whole listening ecosystems having been built around the techniques Koss conceived of over a decade ago.

More fundamentally, Koss is responsible for creating an entire headphone industry beginning from its release of the pioneering "Stereophone" as a ubiquitous way to consume information in 1958. Apple and others are reaping enormous benefits due to John C. Koss’s vision, and Koss Corporation’s commitment to that vision, for more than six decades.

Koss later states that "Koss has been damaged as a result of the infringing conduct by Apple alleged above. Thus, Apple is liable to Koss in an amount that compensates it for such infringement, which by law cannot be less than a reasonable royalty, together with interest and costs as fixed by this Court."

Under a segment in their complaint titled "Apple's Late Foray into the Wireless Headphone Space," they go through Apple's rather short history in the audio business by first purchasing Beats. Koss states that Apple's products are "much like the technology Koss pioneered with Striva in the mid-2000’s."

To sound reasonable, Koss stated that "On September 7, 2017 Koss informed Apple that it was infringing U.S. Patent No. 9,729,959, a parent of several of the Patents-in-Suit.

Over a two and a half year period, Koss and its representatives met with Apple a total of four times in Apple’s California offices and in the course of those meetings, as well as several additional email exchanges, provided Apple with claim charts identifying how Apple infringed certain of Koss’s patents, including each of the Patents-in-Suit.

Prior to the filing of the instant Complaint, Koss informed Apple of its belief that Apple was infringing each of the Patents-in-Suit.

The Five Patents that Apple allegedly infringes include the following:

For the details behind each of the five counts representing the five Koss patents, read their full complaint filed with the court in the SCRIBD document below, courtesy of Patently Apple. 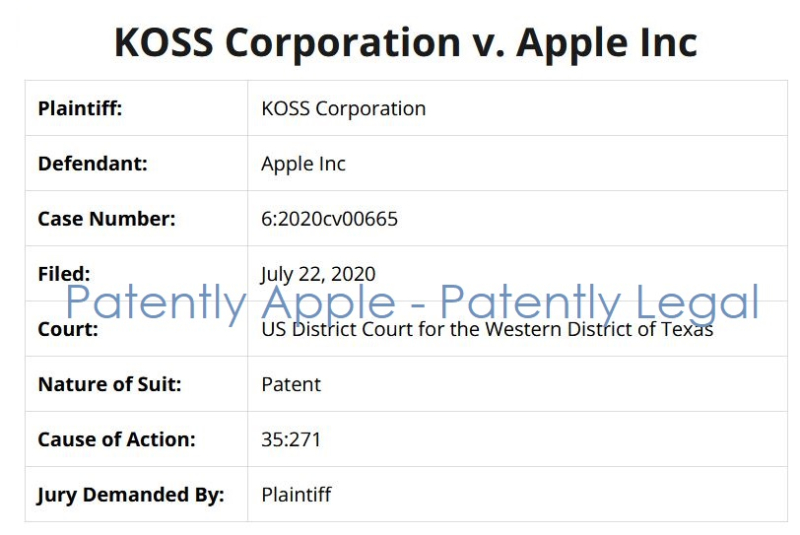