Earlier today Patently Apple posted a report titled "The full Statement from Tim Cook to the U.S. House of Representatives Subcommittee on Antitrust revealed. This afternoon our report is providing the official statements from CEO's Pichai (Alphabet); Jeff Bezos (Amazon) and Mark Zuckerberg (FaceTime). As of 2:40 p.m. PST, Apple's CEO was only pressed on a few matters during today's hearing, with CEO's Pichai, Zuckerberg and Bezos receiving the bulk of complaints against their dominant, if not monopolistic policies to hurt their competitors.

One of the big highlights of today's hearing was Mark Zuckerberg getting hammered over acquiring Instagram to quash a competitor. Zuckerberg didn’t deny that his company acquired Instagram in part so it wouldn’t compete with Facebook on photo sharing. According to emails with Facebook’s chief financial officer in 2012, Zuckerberg wanted to do the deal to buy time -- a year or more to integrate Instagram’s features so Facebook would be up and running on photo sharing before anyone else could reach the same scale.

Reuters reported that U.S. Representative David Cicilline, a Democrat and chair of the antitrust subcommittee, began by accusing Google of theft: "Why does Google steal content from honest businesses?" Cicilline accused Google of stealing reviews from the company Yelp Inc (YELP.N) and said that Google threatened to delist the company from search results if it objected.

Pichai responded mildly that he would want to know the specifics of the accusation. “We conduct ourselves to the highest standards,” he added, disagreeing with the characterization that Google steals content from other businesses to populate its search engine and keep users on its own services. 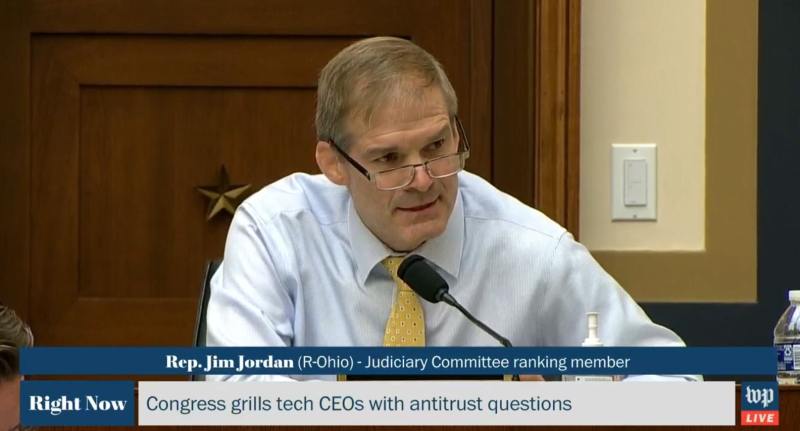 On the Republican side, Representative Jim Jordan accused the companies of taking a long list of actions that he said showed that they're trying to hamper conservatives from reaching their supporters.

In the hopes of grabbing clicks, Bloomberg published a click-bate headline of "Zuckerberg Goes Off-Script, Blasts Apple and Google in Testimony." There was no such moment where Zuckerberg did any such thing. Pointing to competition is far from "Blasting."

In the end, it appeared that all four CEO's were there to simply be given time to digest the fact that the hearings findings will result in a number of companies being labeled monopolies and that they'll be dealt with accordingly at sometime in the future.

Mr. Cicilline (D) serving as Chairman of the House Antitrust Subcommittee made his closing statement this afternoon and it's a powerful statement.

"Today we had the opportunity to hear from the decision makers of four of the most powerful companies in the world. This hearing has made one fact clear to me. These companies as they exist today have monopoly power. Some need to be broken up, all need to be properly regulated and held accountable."

There's more to his closing statement by Congressman David N. Cicilline and you should and could hear every word in the video below starting at the appropriate moment he begins.

Below are the official statements from the other three CEO's being grilled today.