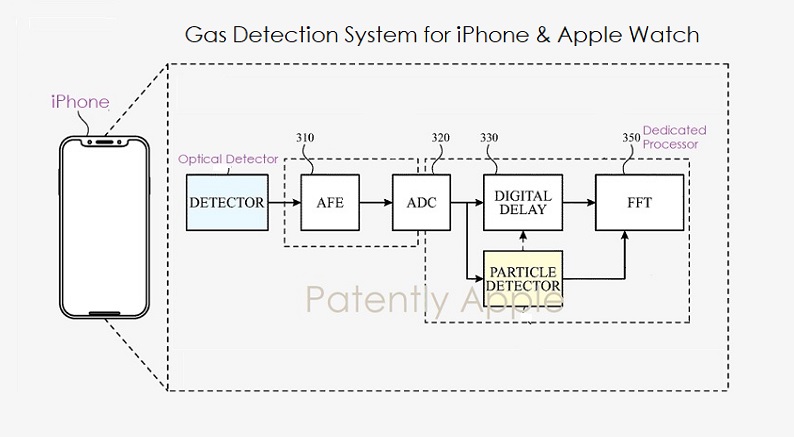 In late November 2019 Patently Apple posted a report titled "Apple's fifth patent on integrating gas detecting sensors in iDevices focuses on adding Specialized Pressure Sensors." Today the US Patent & Trademark Office published a patent application from Apple that relates to reducing power consumption of optical particle sensors that could detect and notify Apple device owners of dangerous gasses in their vicinity whether it be in public, at work or at home.

Apple notes that many mobile electronic devices are equipped with sensors and transducers that enable the devices to perform far more functionalities than communications. Media playing, photography, location detection, online shopping, social media, online banking, calendar and health applications such as heartbeat, blood pressure and blood oxygen level measurement are among the numerous applications that a smart mobile communication device can facilitate.

Further, smart mobile communication devices (e.g., smartphones and smartwatches) can be equipped with sensors for a number of environmental applications such as pressure measurement, gas and particulate matter (PM) detection and analysis.

Particulate Matter (PM) includes microscopic solids or liquid droplets that can be inhaled and lead to serious health problems in the human body. PM is a dominant air pollutant, and it is known that air pollution causes many premature deaths globally each year.

Apple's mobile devices such as the iPhone and Apple Watch could have miniature PM sensors integrated and offer innovative features such as personal PM detection, unhealthy PM alerts and personal PM exposure calculation and analysis.

Such features may rely on the automatic operation of the PM sensor in the background. However, the high-power consumption of the PM sensors, when the sensor is in an active state, can be, for example, on the order of hundreds of milliwatts (mWs) that would take a toll on the device battery life. In particular, the sensor ASIC can contribute to most of the power usage.

In one or more aspects, the subject technology is directed to systems and methods for reducing power consumption of an optical particulate matter (PM) sensor, for consumer electronic devices such as mobile communication devices (e.g., smartphones and smartwatches).

The reduction in power consumption results in an extended battery life that facilitates integration of the PM sensor into mobile platforms. In the subject disclosure, four different application-specific integrated circuit (ASIC) designs for power consumption reduction of an optical PM sensor are described. The optical PM sensor is based on optical feedback interferometry principles and is capable of detecting airborne particles individually and calculating the PM concentration.

In some implementations, the subject technology can be implemented as a stand-alone device. Integration of environmental sensors such as PM sensors with consumer electronic platforms is valuable, as it could enable new features such as environmental and health monitoring and other various features.

Apple's patent FIG. 9 below illustrates an iPhone having specialty sensors that could detect gas and dangerous particles and notify the user to beware; FIG. 3 is a block diagram illustrating an example circuit using a digital delay to reduce power consumption in an optical particle detection device. 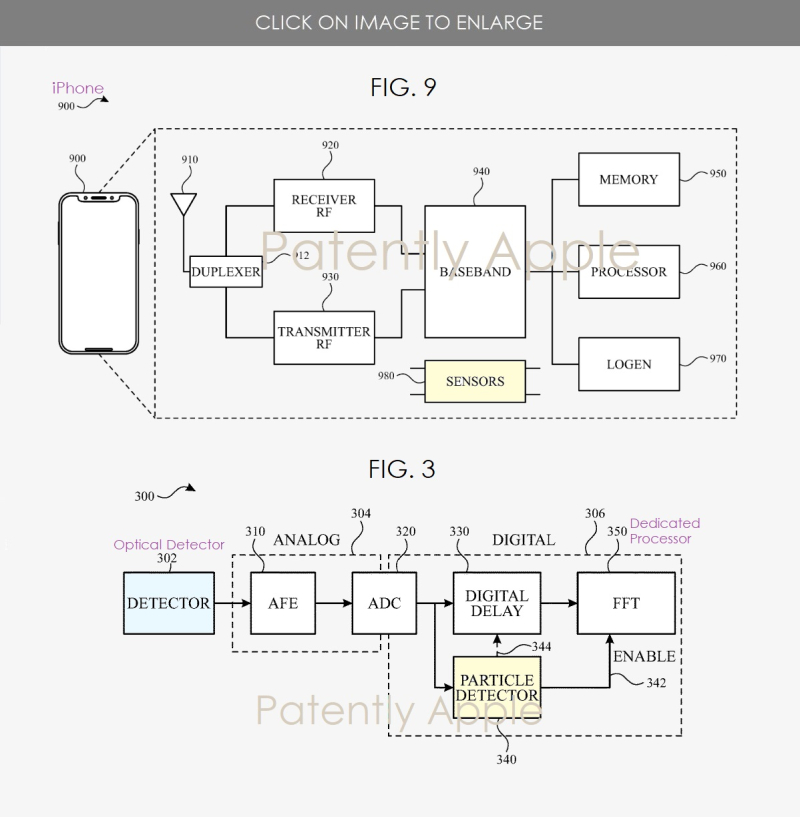 Apple's patent application 20200209133 that was published today by the U.S. Patent Office was filed back in late December 2019. Considering that this is a patent application, the timing of such a product to market is unknown at this time.