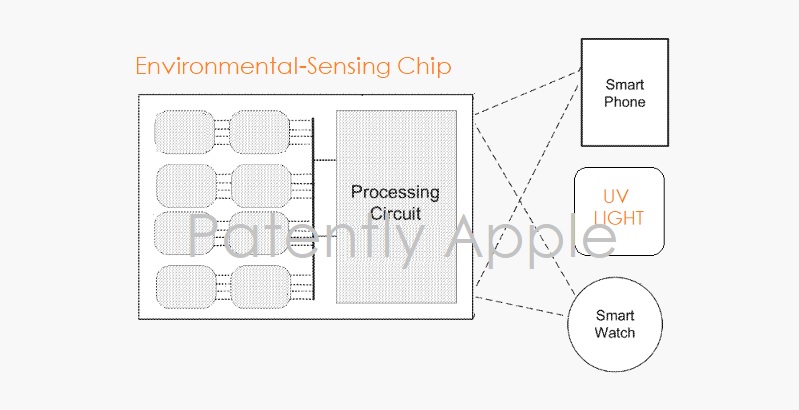 Yesterday Patently Apple posted a report titled "Apple has been Granted a Patent for a Future Environmental Sensing Chip for the iPhone & Apple Watch that uses AI." Twenty-Four hours later and the US Patent & Trademark Office published two patent applications from Apple that relate to future iPhones and Apple Watches having environmental sensors built in that could warn users that they're in a dangerous environment.

More specifically, the two patents published today share a common goal in protecting users from dangerous chemicals that could harm them. Yet in order to do that, iPhones must be kept free of human contaminants like skin oils etc. In order to ensure that a user's future iPhone or Apple Watch will be able to warn them of a dangerous gas or chemical leak, the iPhone must be kept clean of contaminants.

In order to make this as painless as possible for users, Apple has developed a system wherein future iPhones will integrate a system that uses UV light to kill off any germs entering the iPhone by its speakers or port.

Apple notes that environmental sensors integrated into mobile devices can offer novel features such as personal environmental detection and air quality monitoring. However, these devices are prone to organic residue accumulation, such as skin oils, dirt, body hair, etc. Such accumulations can contaminate the device housing and/or the sensor packaging that can produce interference signals and result in increasing sensor errors over an extended period.

The first of two patents on this subject matter is titled "Photo-Oxidation Removal of Organic Contamination for Environmental Sensor Integration."

Apple notes that in one or more aspects, the subject technology is directed to systems and methods to decompose organic contaminants inside product housing or near sensor packaging, in order to restore the clean environment needed for accurate readings of the integrated environmental sensors.

In some implementations, the subject technology decomposes the organic contaminants by using ultraviolet (UV) light to illuminate the contaminants. The disclosed approach can be applied to a number of device platforms including mobile communication devices, such as smartphones and/or smartwatches or other wearable devices hosting environmental sensors.

A miniature sensor is understood to have dimensions smaller than a few millimeters and can be readily integrated into a smartphone or a smartwatch. The environmental sensors may also include relative humidity (RH) sensors and waterproof pressure sensors.

In some implementations, the UV LED can be packaged behind the waterproof, air-permeable membrane inside the sensor package.

In other implementations, the port geometry can be optimized in order to reduce stray light leakage outside the housing, for example, using light traps or light baffles.

The integration of the environmental sensing capability can make the portable communication device a platform with the capability of running an entire new dimension of applications, for instance, in health, safety, security, networking and other areas.

Over time, environmental sensors may be prone to organic residue accumulation, such as skin oils, dirt, body hair, etc. Such accumulations can contaminate the device housing and/or the sensor packaging, which can produce interference signals and result in increasing sensor errors over an extended period of time.

For example, human skin lipids produce squalene, an oily organic compound that can stick to the housing surface and/or sensor packaging. The subject technology provides solutions that can effectively prevent such contaminations, for example, by an optical illumination using a proper wavelength such as UV, for example, UVA and/or UVB.

The UV rays can initiate a photo-oxidation process and decompose the contaminants such as unwanted organic compounds, for example, squalene and protect sensors from being contaminated. This can restore the clean environment inside cavity that allows accurate readings of sensors. 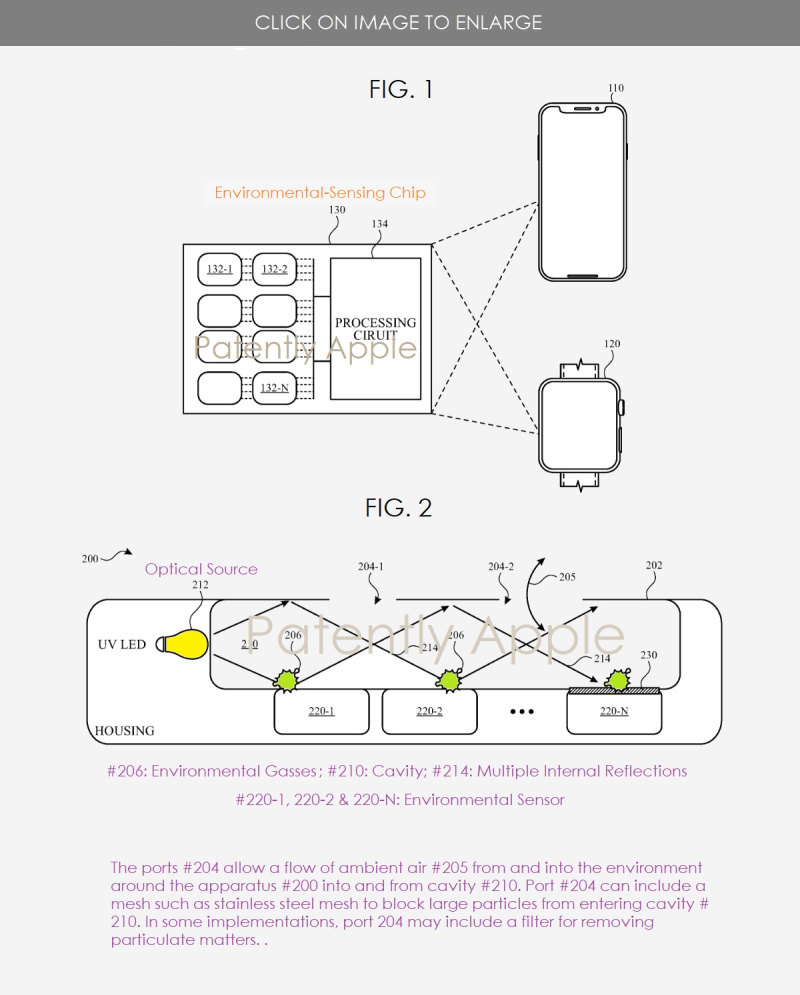 Apple notes that in some implementations, sensors #220 can be miniature sensors with dimensions of a few millimeters. The sensors can be sensitive to environmental agents such as various environmental gases #206. For more on this, read Apple's patent application 20200237940 here.

Apple's second patent application filed under number 20200237947 on this same subject matter is titled "Removal of Organic Contamination by Ozone Oxidation for Environmental Sensor Integration." To learn more about this patent, click here.