Prior to WWDC20, Apple Pumps up the Volume about the Success of the App Store in 2019 backed by a new Analysis Group Study

Next Monday Apple's WWDC20 begins and Apple is trying to pump up the volume and get their developers psyched-out leading up to the event about the success of the App Store for which they develop for.

Tim Cook, Apple’s CEO: "The App Store is a place where innovators and dreamers can bring their ideas to life, and users can find safe and trusted tools to make their lives better. In a challenging and unsettled time, the App Store provides enduring opportunities for entrepreneurship, health and well-being, education, and job creation, helping people adapt quickly to a changing world. We’re committed to doing even more to support and nurture the global App Store community — from one-developer shops in nearly every country to businesses that employ thousands of workers — as it continues to foster innovation, create jobs, and propel economic growth for the future."

The results encapsulate the full sweep of the dynamic, competitive, and flourishing app economy, which has unleashed a torrent of innovation across 175 countries and revolutionized the way the world learns, works, and connects.

The study reveals that the direct payments made to developers from Apple are only a fraction of the vast total when sales from other sources, such as physical goods and services, are calculated. Because Apple only receives a commission from the billings associated with digital goods and services, more than 85 percent of the $519 billion total accrues solely to third-party developers and businesses of all sizes. 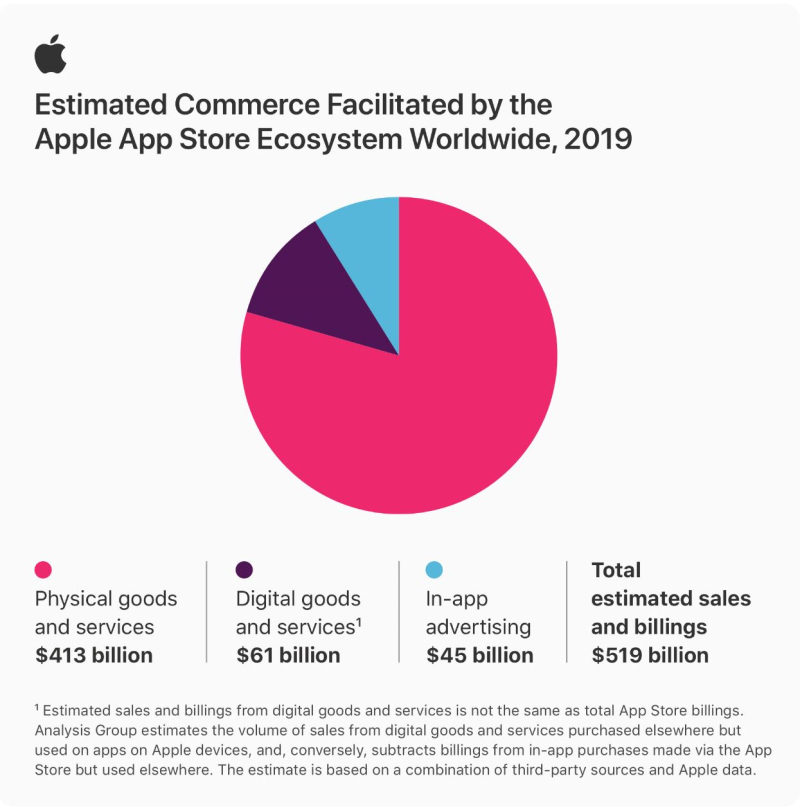 Of the $519 billion the App Store ecosystem supported in 2019, the study found that sales from physical goods and services accounted for the largest share, at $413 billion. Within that category, m-commerce apps generated the vast majority of sales, and of those, retail was the largest, at $268 billion. Retail apps include those that digitally represent brick-and-mortar stores such as Target and Best Buy, as well as virtual marketplaces that sell physical goods, such as Etsy, but do not include grocery delivery, which is its own category.

Other types of m-commerce apps were among the largest sources of sales from physical goods and services. Travel apps, including Expedia and United, accounted for $57 billion. Ride-hailing apps, including Uber and Lyft, comprised $40 billion in sales, and food delivery apps, including DoorDash and Grubhub, made up $31 billion.

Billings and sales from digital goods and services comprised $61 billion, and this category included apps for music and video streaming, fitness, education, ebooks and audiobooks, news and magazines, and dating services, among others. Games, the type of app most downloaded in 2019, was the largest generator of billings and sales within this category. Notable games of 2019 included “Mario Kart Tour,” which was the most downloaded game of 2019, and “Sky: Children of the Light” from indie developer thatgamecompany, which won Apple’s 2019 iPhone Game of the Year.

The study looked at 2019 data to capture an accurate snapshot of the full App Store ecosystem, taking into account all sources of commerce. As a result of social distancing protocols associated with COVID-19, individuals have changed the way they live their lives and are spending more time on their mobile devices. Social apps are helping friends and families stay connected, and education and business collaboration apps are helping students and employees adjust to remote working environments.

Food and grocery delivery apps have benefited from increased consumer demand at the same time as apps related to businesses that have faced restrictions, or those that require in-person interactions, have seen a sharp drop-off. Many brick-and-mortar businesses have turned to mobile commerce, including some that may otherwise have been forced to close without this alternative digital platform.

The App Store, which launched in 2008, is the world’s safest and most vibrant app marketplace, currently home to almost 2 million apps and visited by half a billion people each week across 175 countries. It helps creators, dreamers, and learners of all ages and backgrounds connect with the tools and information they need to build a brighter future and a better world.

As the report noted that "In-app advertising sales accounted for $45 billion, and of that, 44 percent was derived from games," it should be noted that a Class Action was filed against on Friday for in-app purchases and "'Loot Boxes."