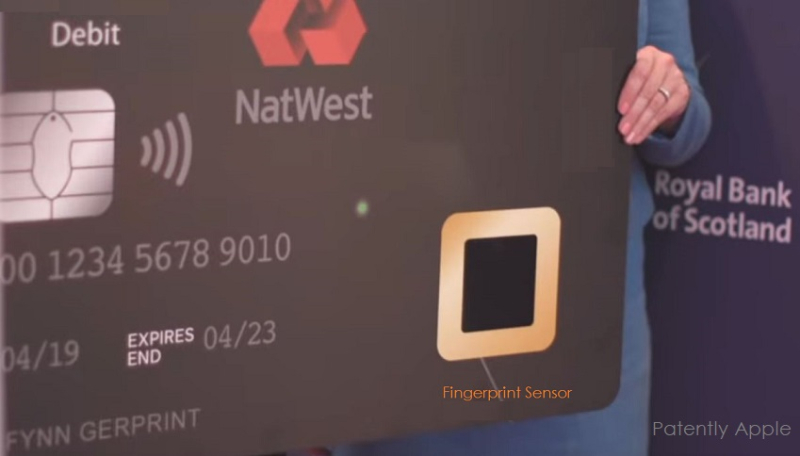 Although Apple wasn't the first to introduce under-display biometrics to smartphones, they will be introducing this feature on iPhone 12. Apple is not copying Android phone makers as they've been working and patenting the technology from at least their 2014 filing made public in 2015 for under-display biometrics for iPhones and the iPad – well ahead of any rumors and Android phones. Apple has filed a number of patents on this since that time (example: 01, 02 and 03).

A new report published today discussed the next security feature trend emerging for contactless payment cards like Apple Card that integrates fingerprint sensors on the face side of the card as presented in our cover graphic.  A BBC report on this trend is covered in the video below.

It has been exactly a year since the company 'Fingerprints' announced that it had shipped one billion fingerprint sensors since its inception. They believe the next billion sensor shipments will see an increased mix of use cases across different industry segments and form factors.

While smartphones will continue to drive the volume, there are other growth areas that will likely develop faster, especially in a post-COVID-19 era. One among them, we believe, is biometric payment cards as the need for secure and hygienic contactless payment methods increase.

It should be noted that the company 'Fingerprints' isn't the only player in this field. Norway's IDEX Biometrics is another major company marketing this next generation security feature for payment cards.

In an industry controlled by three big players Visa, Mastercard and American Express (capturing 3/5th of the card market) a push by any one or two of the players to contactless will see adoption accelerating and we have already seen the signs of the same.

If Mastercard was to officially adopt fingerprint biometric payment cards, it's safe to say that Apple Pay could follow suit as the Golman Sach - Apple Card uses the Mastercard payment network.

For more details on this development, read the full 'Ata Distance' blog report.