The U.S. Patent and Trademark Office officially published a series of 43 newly granted patents for Apple Inc. today. In this particular report we briefly cover three Apple Pencil patents and a series of design patents covering an in-store planter, an Apple Store "Building" that's a style found in China and one for an Apple Store-within-a-Store Retail Fixture. And as always, we wrap up this week's granted patent report with our traditional listing of the remaining granted patents that were issued to Apple today.

There was a time when publishing patent reports about a future Apple Pencil the naysayers would come out the woodwork emailing us with angry insulting messages that Steve Jobs hated the Stylus and would never, ever, release a stylus.

Of course, Steve Jobs wasn't against a future "smart pen," but rather against the use of a dumb plastic pointer style stylus because he had introduced the touch screen for iPhones that was a vastly superior solution that was faster and more natural for the simple iPhone interface.

Some Apple fans are still hoping that Apple Pencil will be able to one day work more naturally marking-up or annotate webpages on an iPad and even an iPhone. Until that day arrives, Today Apple was granted three Apple Pencil patents from the U.S. Patent Office as follows:

Apple Pencil Granted Patent 1: The first is titled "Accessory device having a retaining feature," under number 10,686,483. The patent covers Apple's original work on iPad case accessories that support Apple Pencil that eventually led to a series of "leather Sleeve" accessories. You could check out our original report as a patent application here.

Apple Pencil Granted Patent 2: In Apple's granted patent 10,684,704 titled "Devices and method for manipulating user interfaces with stylus and non-stylus contacts." Apple notes that many electronic devices have an application that views and edits images and Portable Document Files (PDFs). Some of these applications allow a user to annotate a PDF document (e.g., with marks, highlighting, notes, etc.) and also allow the user to navigate within the document (e.g., scrolling up and/or down in the document). However, existing methods for annotating and navigating in PDF documents are slow and inefficient. For example, the user may need to activate a drawing affordance before being able to annotate a document. Further, the user may need to activate a viewing affordance (or alternatively, to deactivate the drawing affordance) before being able to navigate within the document. Further, in conventional methods, stylus contacts and non-stylus contacts are used interchangeably and are not able to serve different roles. Apple's invention addresses these issues by providing a method that allows simultaneous annotation with a stylus contact and navigation with a non-stylus contact (e.g., a finger) without having to activate a mode-change affordance. 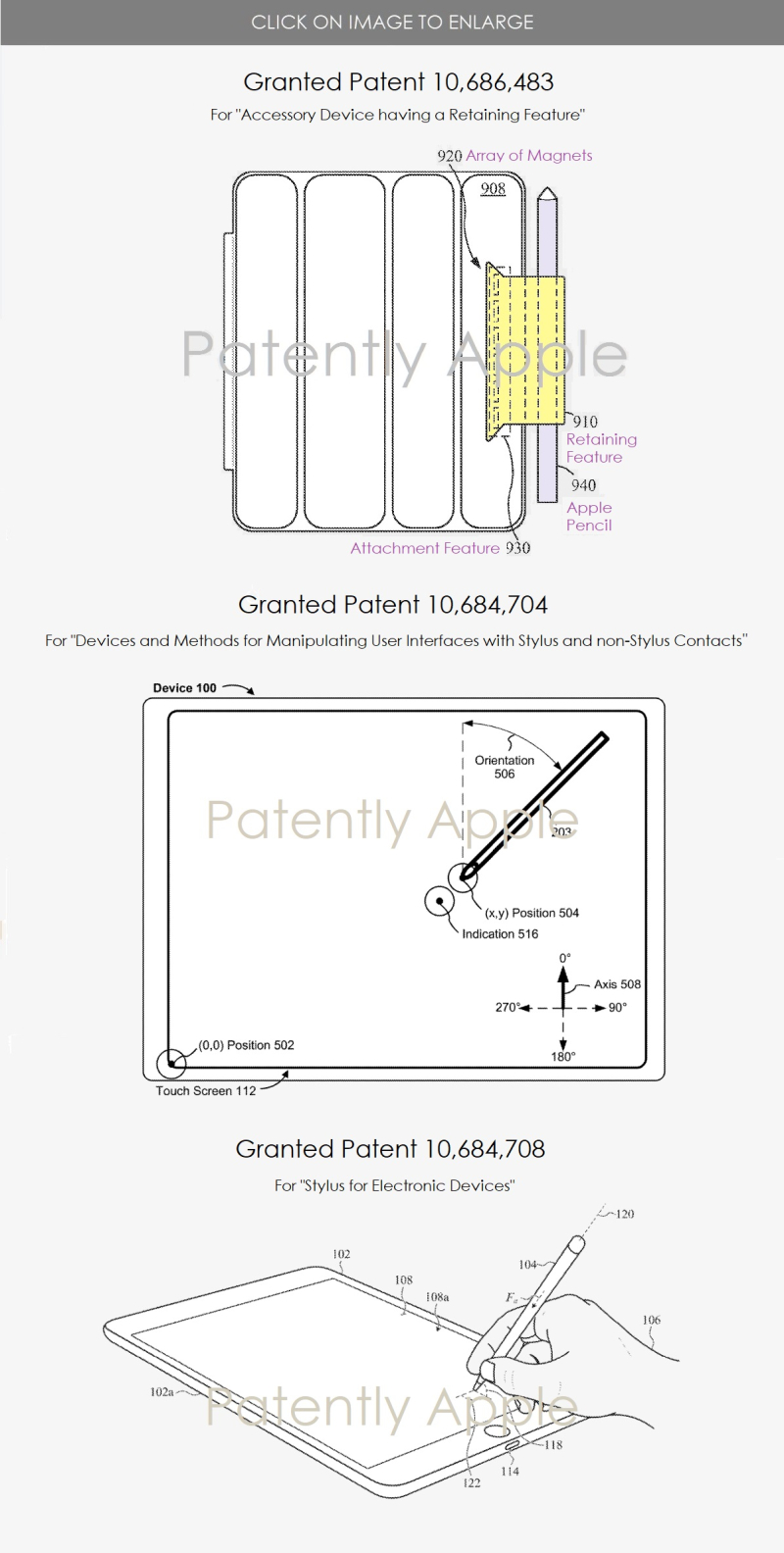 Apple Pencil Granted Patent 3: Apple was granted patent 10,684,708 titled "Stylus for electronic devices." Apple's invention covers a user being able to manipulate Apple Pencil across an iPad surface and the movement may be detected using axially-aligned electric fields generated by the stylus. The stylus may also include a force-sensitive structure that can be used to estimate a force applied to the electronic device by the stylus.

Below is a photo of a series of "Planters" in Apple's San Francisco Store and below it is Apple's latest granted design patent for a "Planter." 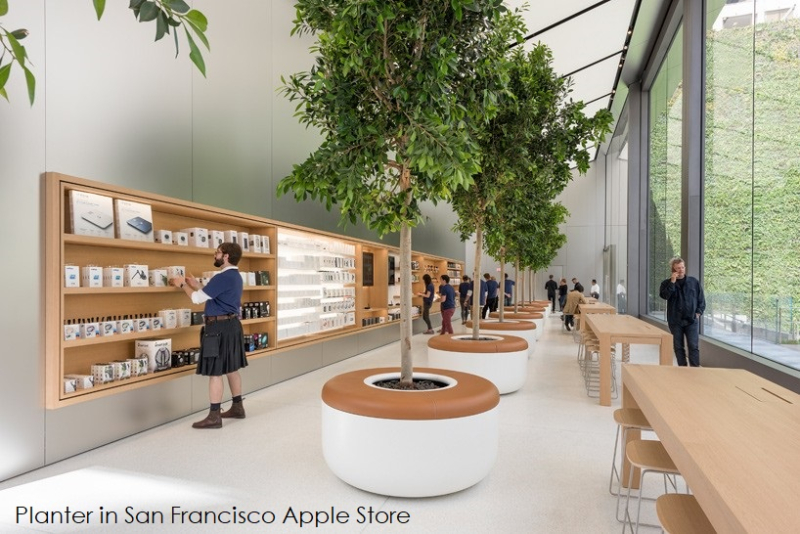 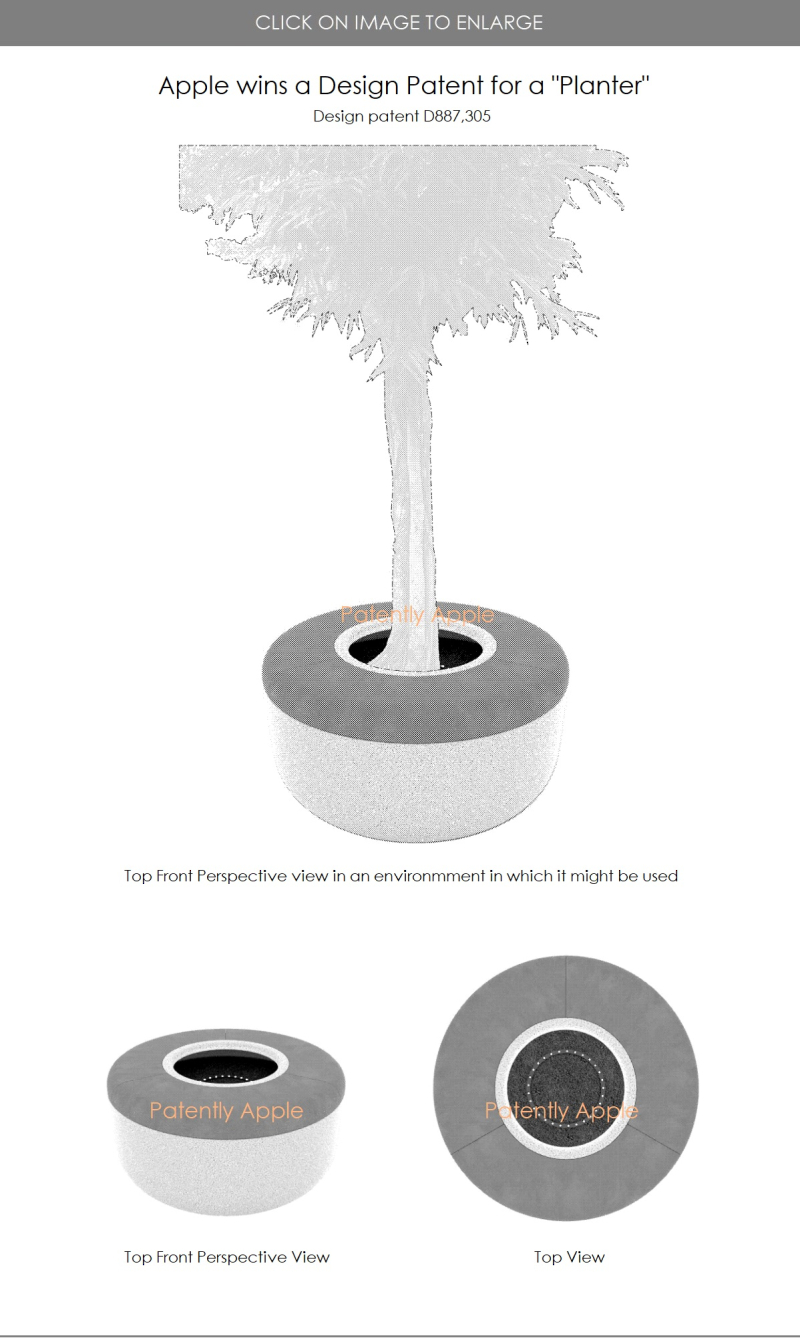 Below you'll find a photo of the Apple Store in Hong Kong (2015) followed by a design patent for that style of building (Apple Stores in China). 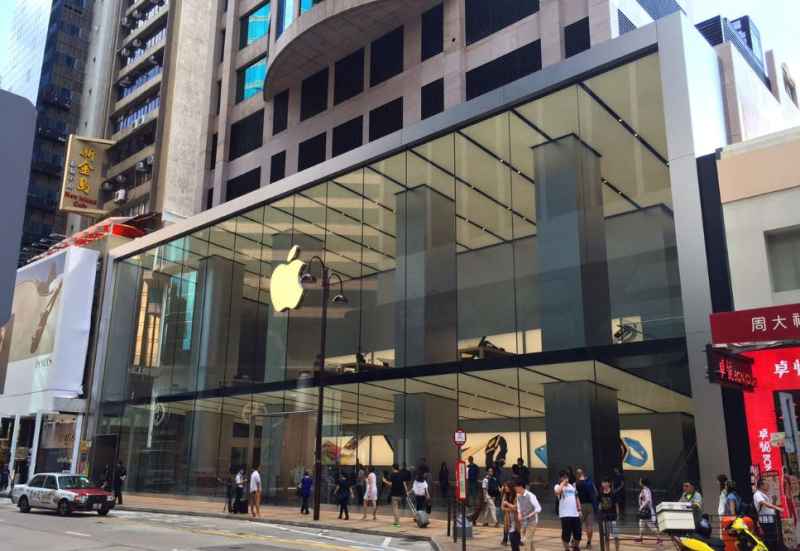 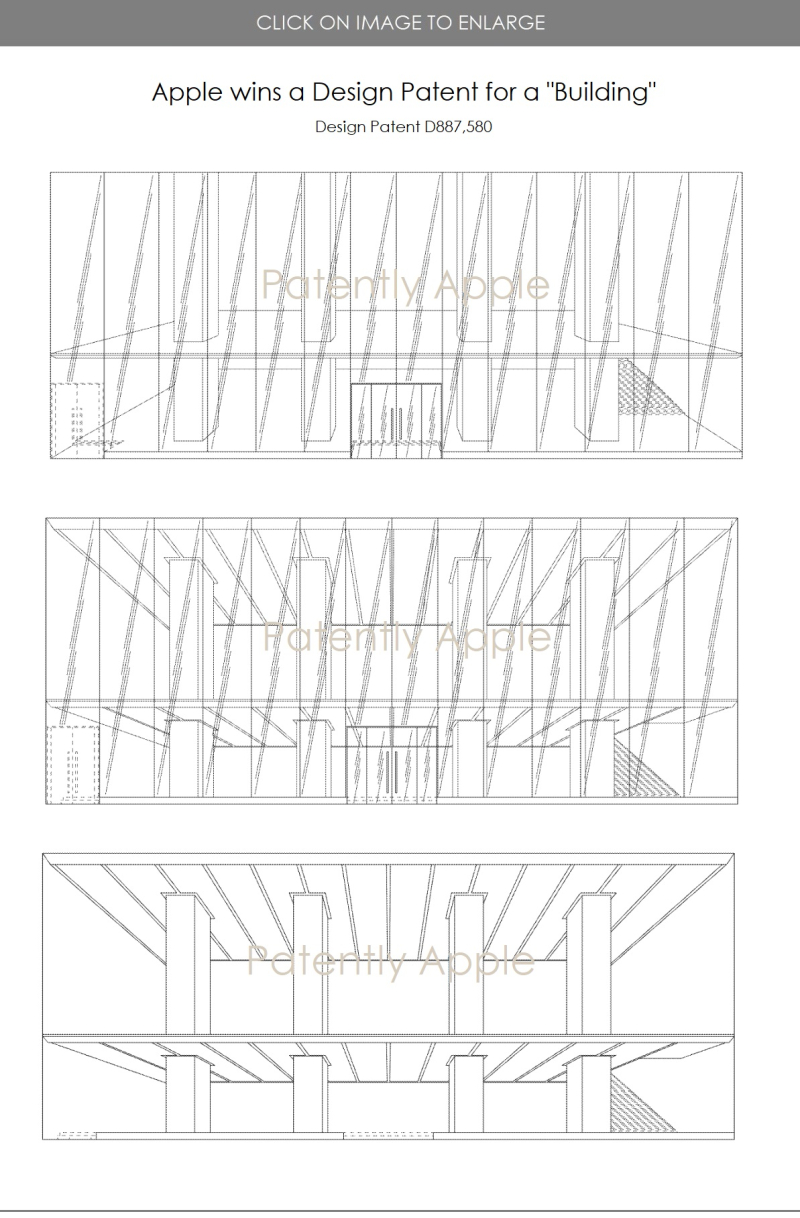 Apple was also granted a design patent for a 'Retail Fixture' which is likely related to Store-within-a-Store fixtures seen at some Best Buy stores. 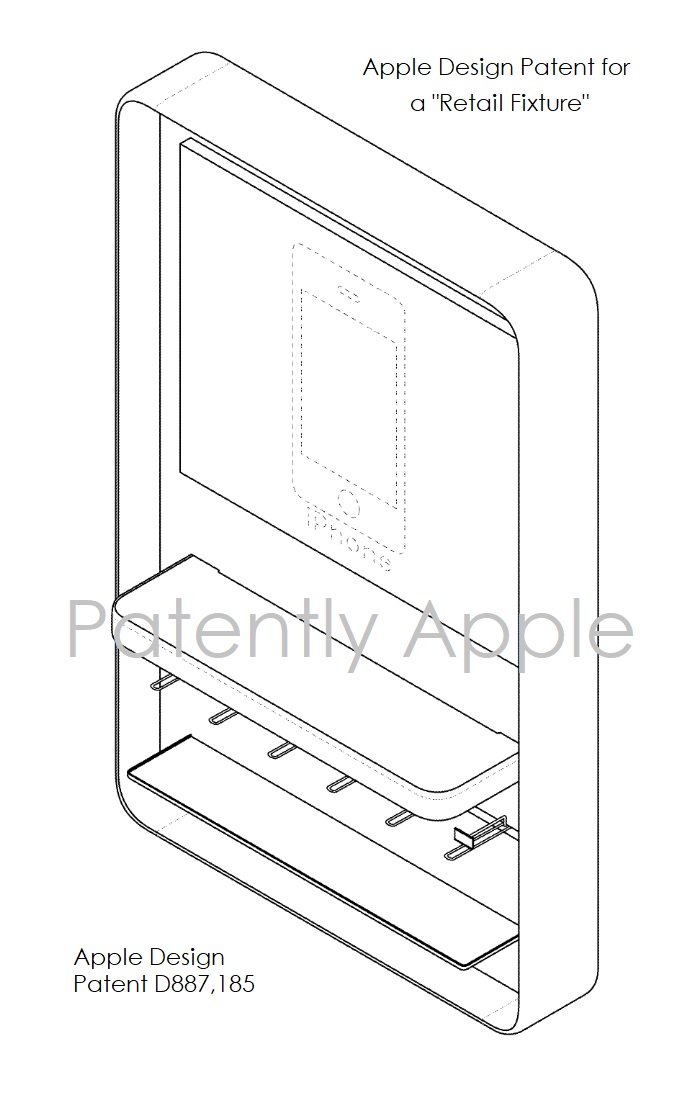 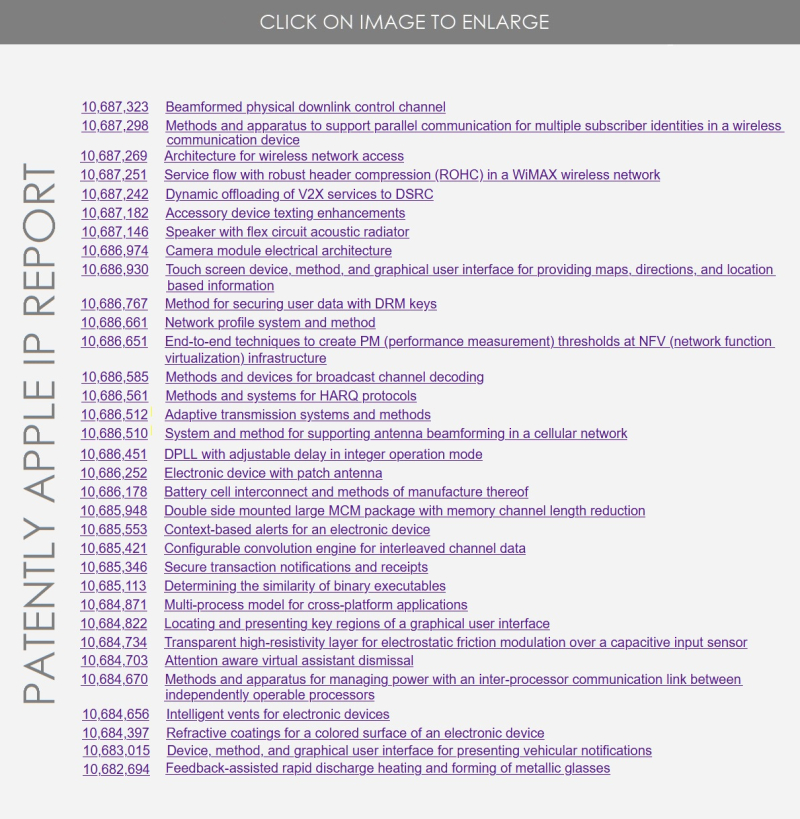