Back in September 2015 Patently Apple posted a report titled " One of the Most Compelling Legal Cases Filed against Apple in Years was filed in California Yesterday." The case brought on by a patent troll by the name of Zeroclick, was about Dr. Irvine, the original owner of the patents in this case, covered an invention for touch displays for the medical and other fields. Dr. Irvine had claimed that he faxed a letter to Avie Tevanian, Apple's then director of software development, back in 2002 about this invention. Apple never replied. The patent troll sued Apple over their 'Slide-to-Unlock" feature that reportedly infringed Zeroclick's acquired patents.

At the time it was questioned whether Samsung could be behind this lawsuit as they were in the middle of a long and nasty patent infringement case brought on by Apple. Beating Apple in this Zeroclick patent would have been of value to Samsung.

In 2018 we posted a follow-up report titled "U.S. Federal Circuit Gives Green Light to Patent Infringement Case against Apple over the iPhone's Touch Display." The Federal Circuit revived an infringement suit alleging that Apple used another company's intellectual property for its iPhone touch screen, finding that a California federal judge erred by invalidating two patents because he hadn't done the proper analysis to find they were indefinite." Eventually the patents were once again found to be invalid as you'll learn from Apple's action filed with the court this week.

On Friday Apple filed an action for declaratory judgement of invalidity of two U.S. patents that were previously ruled as invalid back in 2015. The patent troll is trying to repeat their case using another tactic after the court ruled the patents invalid.

Apple's lawsuit begins with a segment title "Nature of Action." Apple's position in-part states the following: "This is an action for declaratory judgment of invalidity of U.S. Patent No.8,549,443 and U.S. Patent No. 7,818,691 arising under the Declaratory Judgment Act.

In the course of briefing in the Zeroclick-1 Litigation on the issue of standing, Zeroclick-1 asserted that Dr. Irvine had transferred the rights to the Zeroclick Patents to Defendant Zeroclick-2 in January 2020.

For more details, read Apple's full complaint filed with the court in the full SCRIBD document presented below, courteous of Patently Apple. 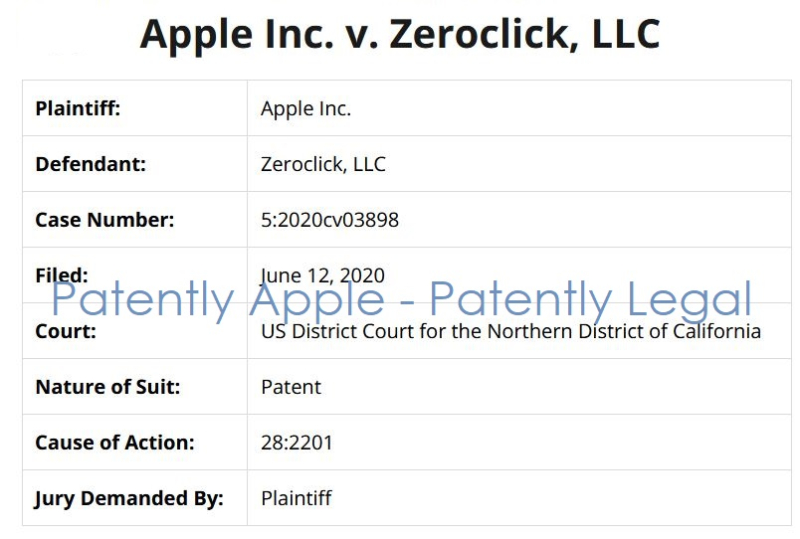