Home Archives Contact Us Subscribe Twitter Facebook Patently Mobile
While France is known for their great wines, more recently they've been better known for their whiny threat and attitude towards Apple
Belkin, maker of Apple Accessories, is waiting on the FDA's Approval to Sell Emergency-Styled Ventilators

Ridley Scott, one of the greatest film and TV producers on the market today has signed on with Apple TV+ 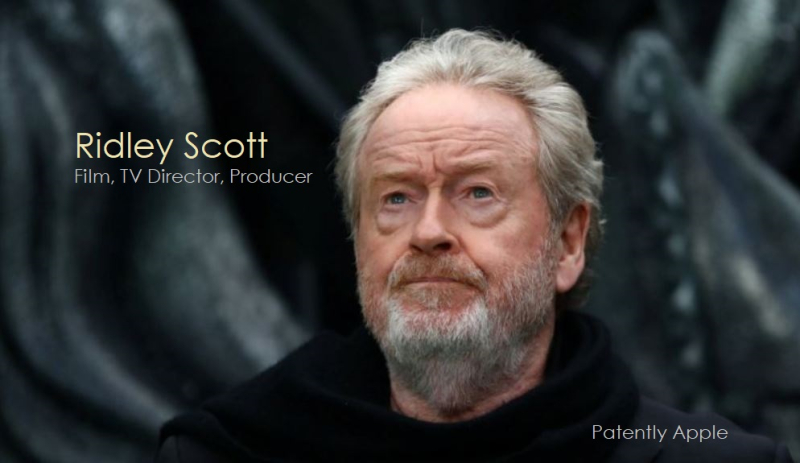 It's being reported today that following a competitive dealmaking process with other outlets bidding, the prolific producer Ridley Scott is setting up shop at Apple TV+. Scott will be creating new projects for the tech giant for whom he once directed its famed "1984" commercial.

Under the multiple-year pact, Hollywood Reporter states that "Scott and his Scott Free Productions banner will create and develop new projects for the tech company. With the move, Scott ends his years-long overall deal with CBS TV Studios. Sources say the Apple deal is valued in the high seven-figure range."

Deadline adds that "Scott Free has been behind such successful films as Top Gun, Gladiator and The Martian; as well as television series including The Good Wife, The Good Fight, The Man in the High Castle and The Terror.

In the 25 years since the company was formed, it has earned over 100 Emmy nominations with 22 wins, and 28 Golden Globe nominations for its television projects," and is bound to be a positive for Apple TV+ overall.

Scott was also behind the classic 'Alien' movie which was one of the top sci-fi movies of its time. Other great movies of his that I've enjoyed over the years include Blade Runner, Gladiator and Black Hawk Down.