Home Archives Contact Us Subscribe Twitter Facebook Patently Mobile
TSMC issues a Press Release confirming its commitment to an Arizona chip plant that may extend to U.S. 'Customers & Partners'
Apple to Restrictively Open 10 Apple Stores in Italy on Tuesday with others in the Country's Northwest to remain Closed

On Wednesday Patently Apple posted a report titled "Two of Google's Key Pixel Phone Architects are out which has caused a little Mayhem behind-the-scenes." The source further noted in their report that "Google shipped around 2 million units of the Pixel 4 in the first two quarters it was available, at the end of 2019 and beginning of 2020, according to IDC’s estimates, a drop from the 3.5 million Pixel 3 and nearly 3 million Pixel 3a models that shipped in the first two quarters of their availability."

Whether the executives were pushed out of Google because they had the lead over Apple's iPhone XS and then failed to deliver a follow-up blow against the iPhone 11 Pro Max is unknown. Apple's latest phone was able to advance their camera to counter the Pixel that may have killed the Pixel 4 XL's momentum.

Another reason for their ouster could have been that Google's smartphone executives were unable to deliver their patent-pending technology on time. Technology that could  have provided the Pixel with a tangible advancement over the iPhone 11 Pro and perhaps even challenge Samsung's Note.

Google's patent-pending invention that was published earlier this month relates to advancements made to their motion sensing radar technology that was borne out of Project Soli. The advancements will allow a future version of the Google's Pixelbook Pen to work with a Pixel phone, their Stadia game controller, home automation appliances and future devices.

In Google's patent FIG. 1 presented below we're able to see an example environment #100 in which techniques enabling a radar-image shaper for radar-based applications can be implemented. The example environment includes a Pixel Smartphone (#102), which includes, or is associated with, a radar system #104, a radar-signature manager #106 and a signature library #108. 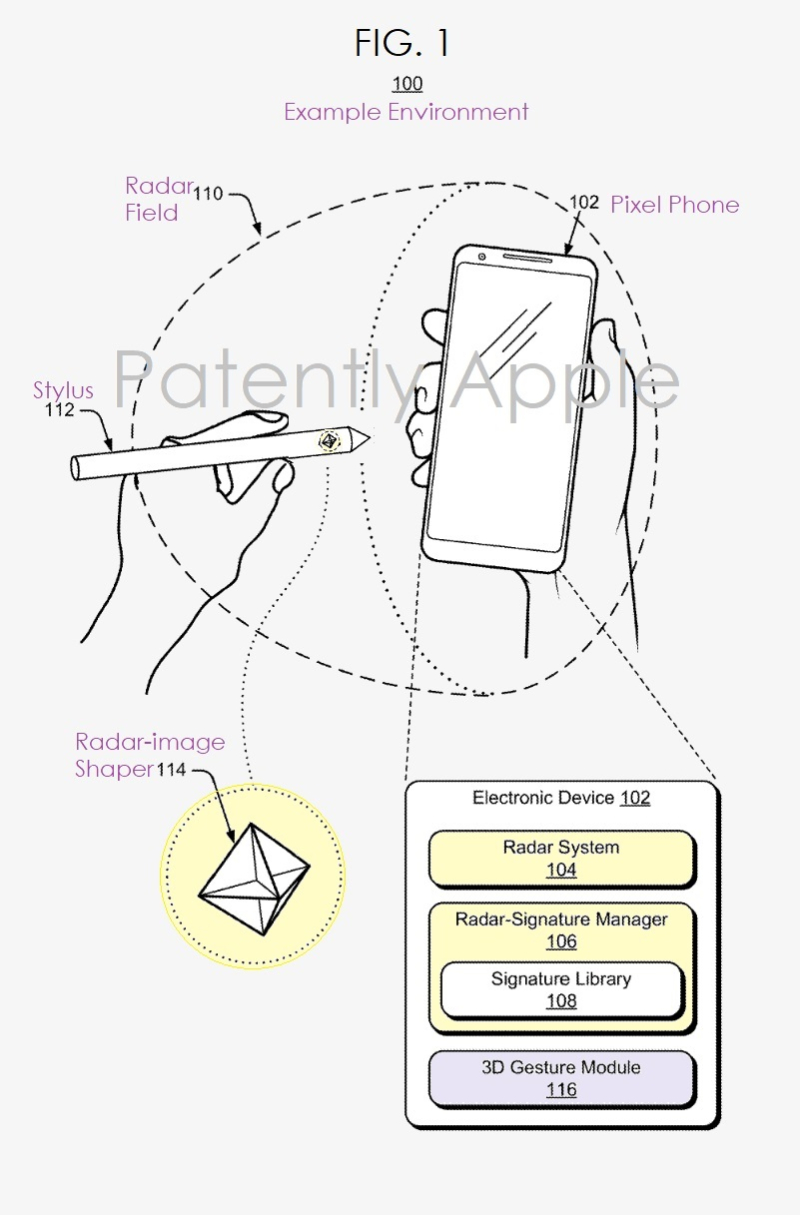 The use of a stylus or smart pen would provide a future Pixel phone with the ability to market itself as a Samsung Note-Like competitor. The advantage to Google's approach is that the same radar system can be used with both a smart pen and 3D hand gestures.

It may also be able to work with their Stadia game controller at some point in the future as presented in patent FIG. 13 further below. 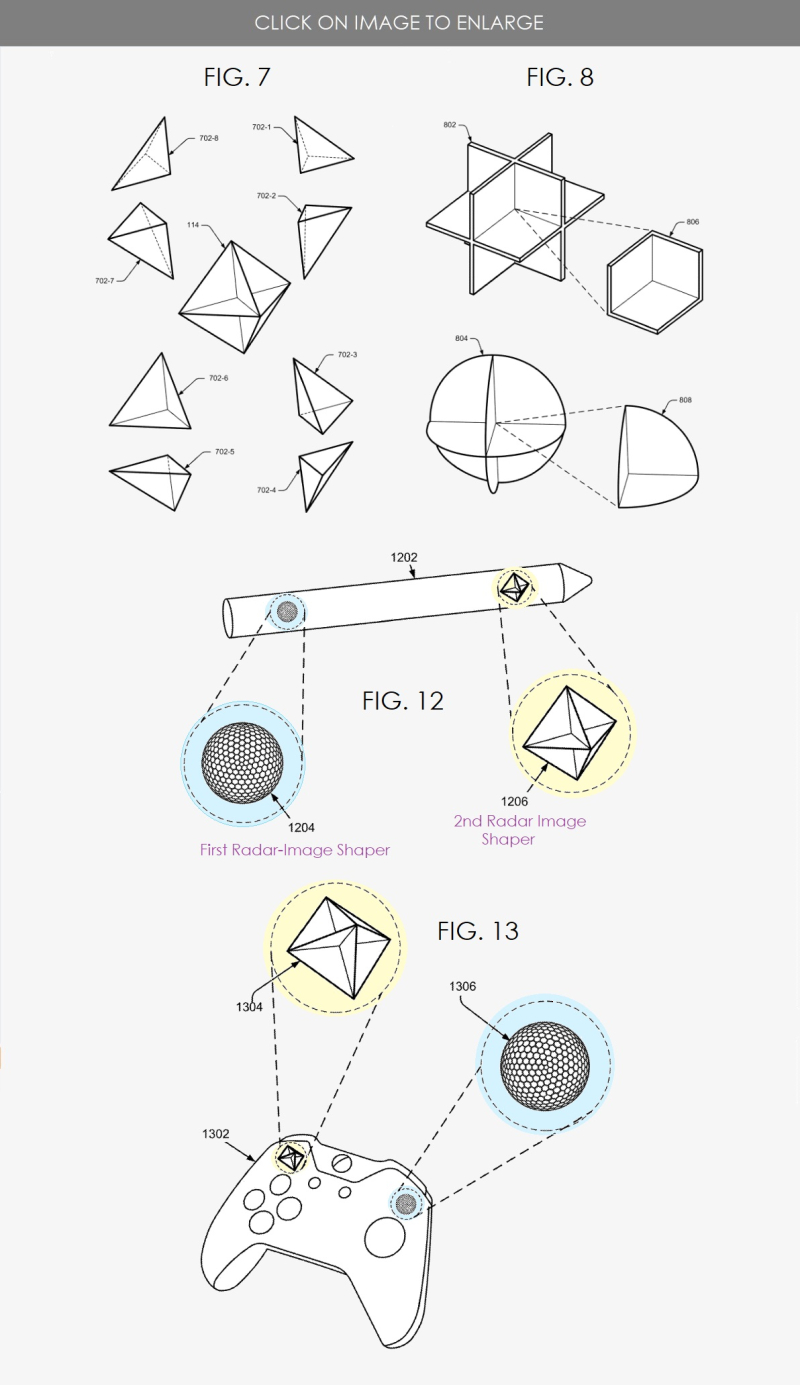 Google later notes that their stylus could also detect 3D gestures that can be used to control a future Pixel phone to provide additional functionality. For instance, in a radar-based drawing application, a user will be able to rotate the stylus between a thumb and a finger, or between two fingers, to increase or decrease a line thickness or brush size.

The user may also use a "shaking" gesture to pick a different brush or change from a brush or pen to an eraser. Similarly, in a radar-based drawing application, the user may draw or sketch in 21/2D or in full 3D.

Further, in a radar-based application with editing functions, a user may draw on a screen or other surface and use the 3D gestures with the stylus to create 3D volumes from 2D drawings (e.g., select a corner or other perimeter point on a 2D square or circle and lift the stylus off of the screen to create a cube or sphere). Once a 3D object exists, 3D gestures may be used to rotate, cut, or otherwise manipulate the 3D object.

Google also notes that their radar system will be able to work with future applications like 3D printers or home automation devices.

Google's patent filing further notes that their radar system will be able to extend to other devices over time such as a TV remote, a Pixel phone case and appliances.

Lastly, our graphic below presents you with an overview of Google's advanced Radar System in FIG. 3  and in patent FIG. 4 Google illustrates example arrangements of receiving antenna elements for the radar system of FIG. 3. 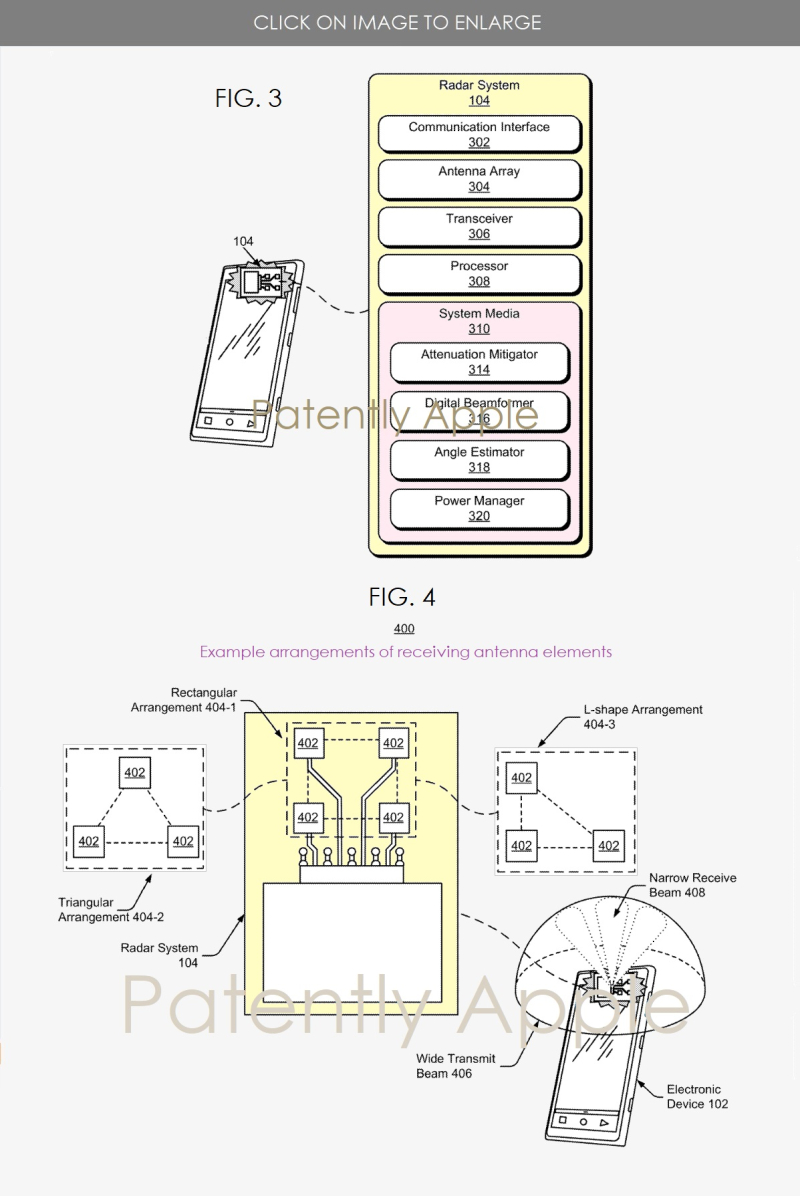 Google's patent filing was made in Q4 2018 and published earlier this month by the U.S. Patent and Trademark Office.

Considering this is a patent application, it's unknown at this time when such products could make it to market.