Home Archives Contact Us Subscribe Twitter MeWe Facebook Patently Mobile
An Interview with Laurene Jobs by the NY Times covers a lot of Territory including thoughts on Steve, Social Issues & Projects
While Apple grew sales in Latin America in Q4 2019, their upcoming SE2 iPhone could boost sales in H2 2020 to Challenge Huawei

The Apple Watch Digital Crown took a huge leap forward with the release of Apple Watch Series 4 by allowing the Digital Crown to have a touch surface and ability to measure an ECG that generates an ECG waveform on the Apple Watch display as noted below.  One of the two patents that were published this week by the U.S. Patent and Trademark Office also describes the zoom feature that the enhanced crown enabled. It's very rare that patents on a product already in the market for two years finally surfaces. Obviously, Apple wanted to keep their inventions as secretive as possible and for as long as possible. 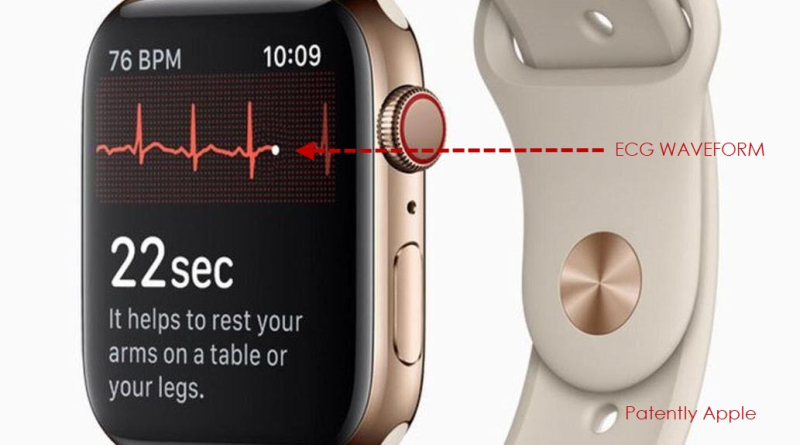 In some embodiments, one or more additional electrodes besides the conductive cap may be positioned on the exterior surface of the electronic device. Providing electrodes on different surfaces of a device may make it easier for a user to place different body parts in contact with different electrodes. In some embodiments, for example, the conductive cap is operable to be contacted by a finger of a user of the electronic device while another electrode is positioned against skin of the user. For example, a user may place one or more of the additional electrodes in contact with their wrist, and may touch the conductive cap (or another electrode) with a finger of their opposite hand (e.g., an electronic watch may be attached to a wrist adjacent one hand, and the crown may be touched with a finger of the opposite hand).

Apple's patent FIG .1B illustrates and Apple Watch that incorporates a crown assembly; FIG. 3C shows a partial view of the new crown assembly with the conductive cap removed; FIG. 8 shows an elevation of a watch body capable of sensing a biological parameter. 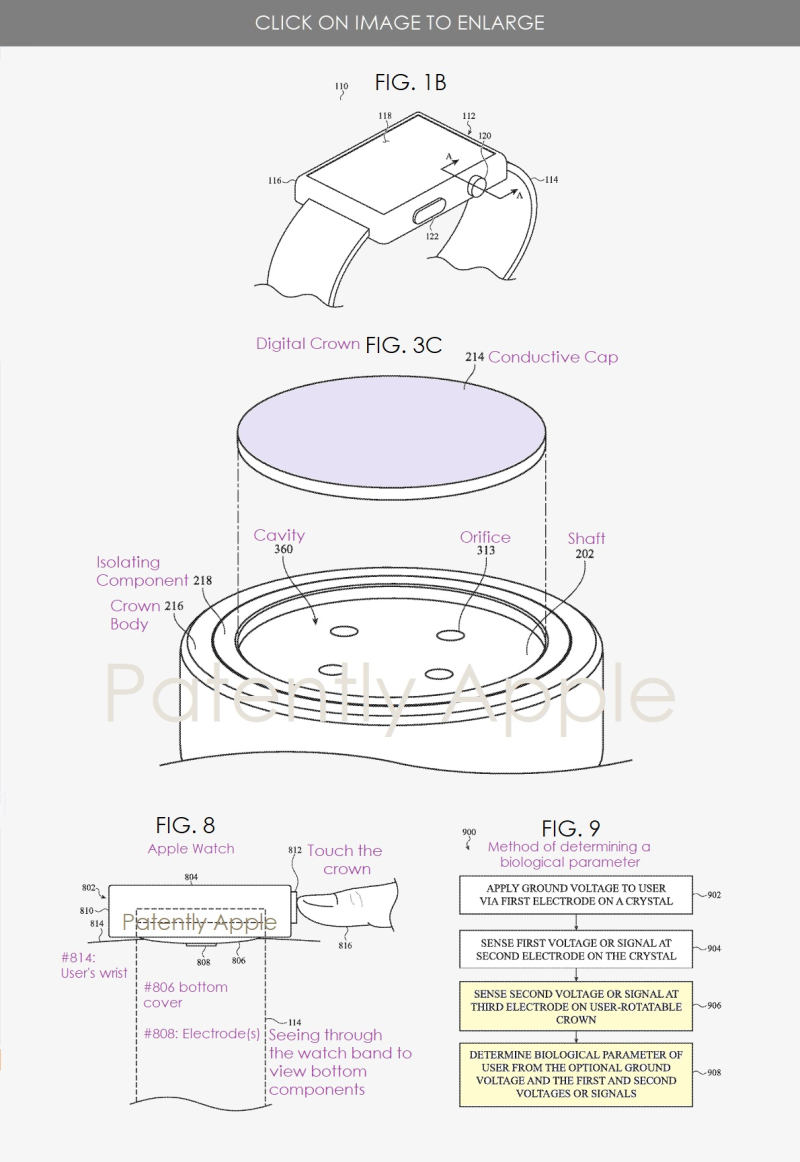 Patently Apple covered an Apple patent back in 2016 that described an ECG as a feature on a device that could measure "Electrocardiographic Signals."

For the record while the filing date on this week's patent is shown to have been made 3 months after the Apple Watch series 4 with its new Digital Crown came to market, Apple notes that the filing incorporates the benefits of an August 2018 Provisional Patent unpublished in August 2018 and going back earlier when they filed it. Obviously, Apple tried and succeeded in keeping this invention secretive until the product was into the market for some time before it was published by USPTO.

2. Watch Crown having a Conductive Surface

Apple notes that the electronic watch includes an enclosure defining an opening and a crown extending through the opening and configured to receive a rotational input and a translational input.

While this patent definitely covers a biological parameter, such as a heart rate, an electrocardiogram, the patent also covers Digital Crown being used in connection with a zoom operation for viewing photos. 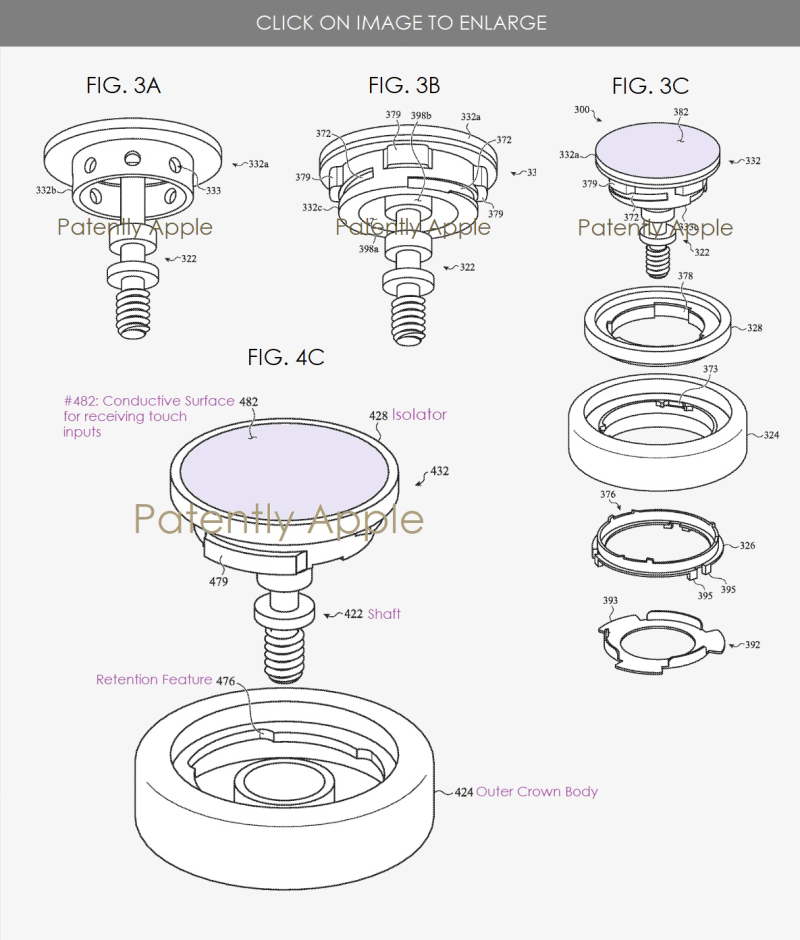 Apple's patent FIGS. 8A and 8B Illustrate a digital crown used to perform a zoom operation. 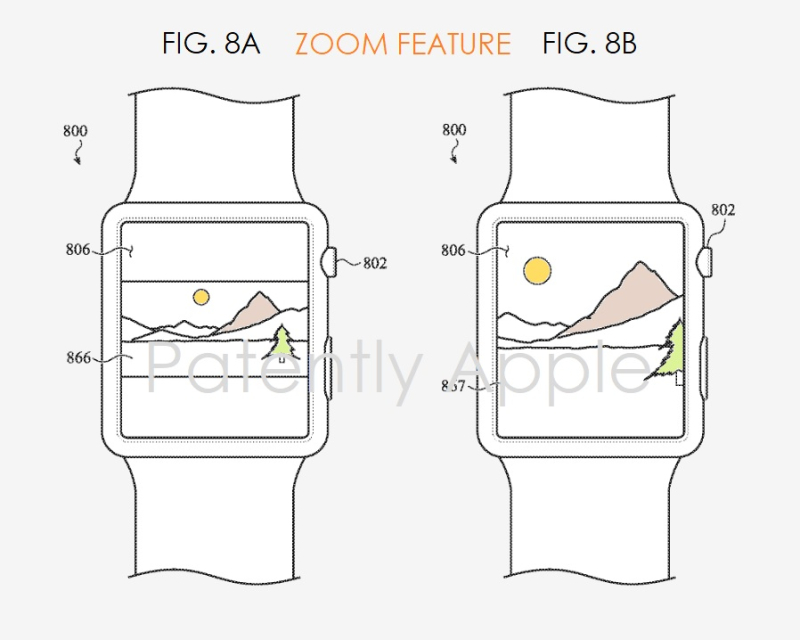 While the filing date is shown to have been made 4 months after the Apple Watch series 4 with its new Digital Crown came to market, Apple notes that the filing incorporates the benefits of two Provisional patents filed in August 2018, a month prior to the new Series 4 Apple Watch debuted.