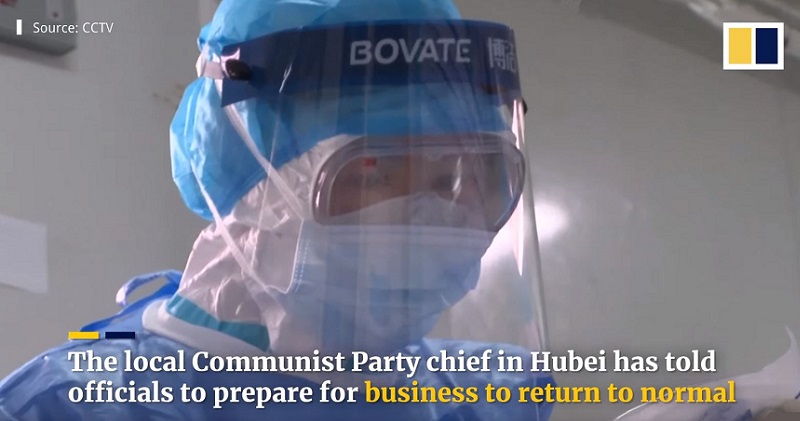 Chinese President Xi Jinping on Tuesday made his first visit to Wuhan since a coronavirus outbreak forced a lockdown of the city of 11 million people, in a sign that authorities’ efforts to control the virus are working. Wuhan is where Foxconn and other Apple suppliers have major plants.

The video below provides an overview of the message from President Xi Jinping. At the 0:57 mark, you'll see a clip that mirrors our cover graphic.

How much of the "official" video is propaganda by the communist party is unknown. There's another video in English from Al Jazeera with a different take should this topic interest you.

Reuters reports that "Xi’s arrived on the same day that Wuhan shut the last of 14 temporary hospitals that had been opened to manage a surge in coronavirus patients.

Earlier today China said it had just 19 new coronavirus infections on Monday, down from 40 a day earlier. That also marked the third straight day of no new domestically transmitted cases in mainland China outside of Hubei province, where Wuhan is located, even as the disease spreads rapidly in other countries, including Italy and the United States.

The official Xinhua news service cited Xi as saying: "The situation of coronavirus prevention in Hubei and Wuhan has shown positive changes and achieved phased results, initially realizing goals to stabilize and turn around the situation."

During his visit, a masked Xi was shown meeting with local officials, medical staff, and volunteers, state broadcaster CCTV reported. He addressed frontline medical workers and a hospitalized patient by videolink.

Of the new coronavirus cases announced by China, 17 were in Wuhan. Two others - in Beijing and Guangdong province - involved people who had arrived from Britain and Spain, respectively.

That brings the total number of confirmed cases in mainland China so far to 80,754.

Chinese authorities have ramped up warnings about the risks from foreigners and Chinese nationals traveling to China from viral hot spots abroad such as Iran and Italy. As of Monday, there were 69 imported cases. For more on this, read the full Reuters report.

Last week Patently Apple posted a report titled " While Foxconn announces no growth for H1, they made it clear that they have not seen any great impact on clients new product launches." While only time will tell if Apple products do indeed remain on track, some recent reports from Wall Street brokers are contradicting Foxconn's commentary.