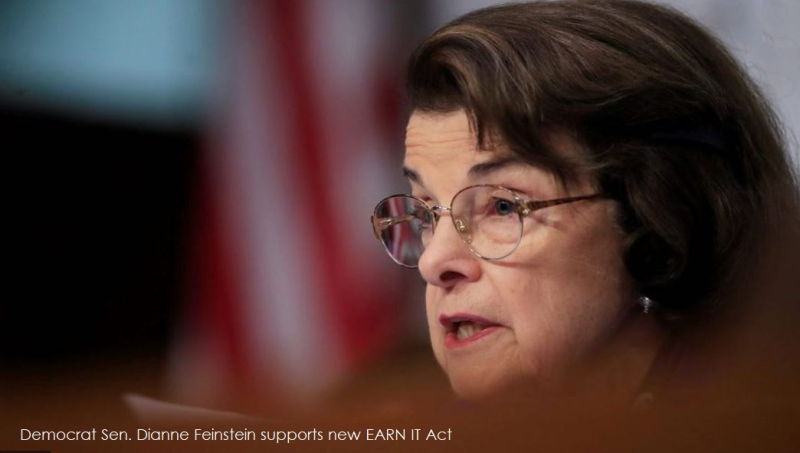 In late February Patently Apple posted a report titled "Legislation in the works could remove immunity that currently protects tech companies from having to Assist Law Enforcement." The bill was proposed by a bipartisan group of lawmakers, aims to fight the distribution of such material on online platforms like Facebook and Alphabet’s Google’s by making them liable for state prosecution and civil lawsuits. It does so by threatening a key immunity the companies have under federal law called Section 230.

The bill by Judiciary Committee Chairman Lindsey Graham and Democratic member Richard Blumenthal would end the civil immunity of platforms like Facebook and Alphabet’s Google for user-posted content if they do not follow a new commission’s "best practices" for detecting abusive images.

A Senate judiciary committee hearing has been scheduled for next Wednesday. The bill would overrule the immunity companies have under federal law known as Section 230, which shields online platforms from being treated as the publisher of information they distribute from others, protecting them from most liability over content.

The Earn It Act cuts the immunity for companies that do not follow practices laid out by a 19-member commission headed by the attorney general.

Other members will come from law enforcement, abuse survivors and victims’ services groups, as well as the tech industry.

Graham said in a statement: "For the first time, you will have to earn blanket liability protection when it comes to protecting minors."

Democrat Blumenthal said technology companies need to do better. Specifically he's quoted as stating that "Tech companies have an extraordinary special safeguard against legal liability, but that unique protection comes with a responsibility."

Blumenthal added: "Immunity from legal responsibility “is a privilege – they have to earn it – and that’s what our bipartisan bill requires."

Democratic Senator Ron Wyden, who co-authored Section 230, is fighting those in his own party like the judiciary committee’s top Democrat, Diane Feinstein.

Wyden's commentary is shown to be full of delusional paranoia: "This terrible legislation is a Trojan horse to give Attorney General Barr and Donald Trump the power to control online speech and require government access to every aspect of Americans’ lives."

At a separate event on Thursday, the Department of Justice and major tech companies agreed on principles for combating child exploitation online. One of the principles said that technology platforms "should seek to design their products with child safety in mind," which could be seen as opening a discussion about how to defeat encryption.

British Home Office minister James Brokenshire, who attemded today's event stated that "I hope this is just the start of us working together to do more," adding that "Encryption remains the elephant in the room."

To learn more and hear from various critics of the bill, read the full Reuters report.

In hindsight, a "discovery" by Forbes in February of this year almost seems like a planted story when you think of the timing being just right in context with the newly proposed law.

The report noted "a search warrant uncovered by Forbes, for the first time we now know how the iPhone maker intercepts and checks messages when illegal material—namely, evidence of child sexual abuse—is found within." You could read more about that story here.

While the Reuters report was informative, the CNBC report really delivered a wider view of the new legislation and how tech companies are deeply involved.

The report notes that "A coalition of tech companies is backing new principles put forth by five governments to prevent the spread of online child exploitation.

The organization, which includes Apple, Facebook, Google and Twitter, committed to promoting the new voluntary standards that outline how the industry should consider survivors’ needs and safeguard certain features such as livestreaming.

The 11 principles were announced at a press conference at the Department of Justice on Thursday afternoon. Representatives from the Department of Homeland Security as well as the United Kingdom, Canada, Australia and New Zealand participated in the announcement alongside U.S. Attorney General William Barr.

Barr said representatives from Facebook, Google, Microsoft, Snap, Twitter and Roblox were also in attendance and had helped inform the principles.

The governments said WePROTECT Global Alliance, made up of 97 governments, 25 tech companies and 30 civil society organizations, will promote adoption of the guidelines.

The principles also steer clear of a key dispute between the tech industry and law enforcement by not directly addressing encryption, a feature favored by privacy advocates that obscures the content of messages to anyone outside of the sender and receiver.

“Predators’ supposed privacy interests should not outweigh our children’s privacy and security,” Barr said. “There’s too much at stake.”

In the bigger picture, AG Barr and other officials fear important evidence will be lost as tech companies create more encrypted messaging and communication products. For more on this, read the full CNBC report.