Apple was the Resounding Wearables Champ in 2019, with Q4 leaving second place Xiaomi in the Dust

A new analytical report from IDC states that the worldwide market for wearable devices grew 82.3% in the fourth quarter of 2019 (4Q19), reaching a new high of 118.9 million devices shipped according to new data. The stunning growth was largely due to the proliferation of hearables, which captured 55.3% of the entire market.

It's no surprise that it was Apple that led the market with 43.4 million units shipped in 4Q19 thanks to its refreshed AirPods, AirPods Pro, and Apple Watch as well as its Beats products spanning multiple price points. 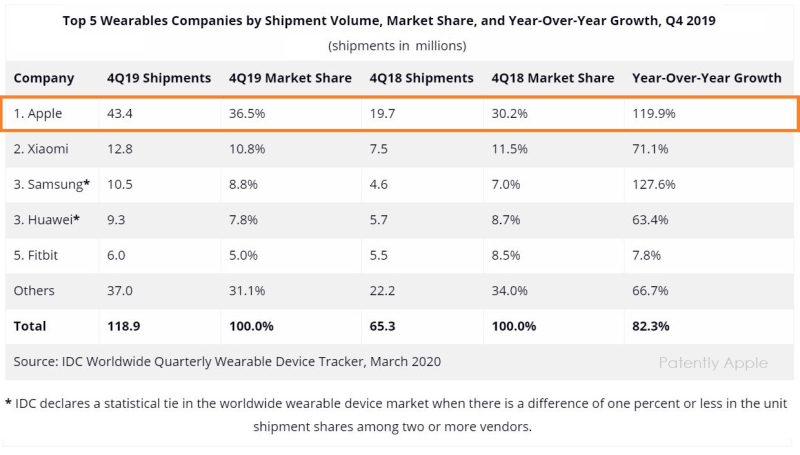 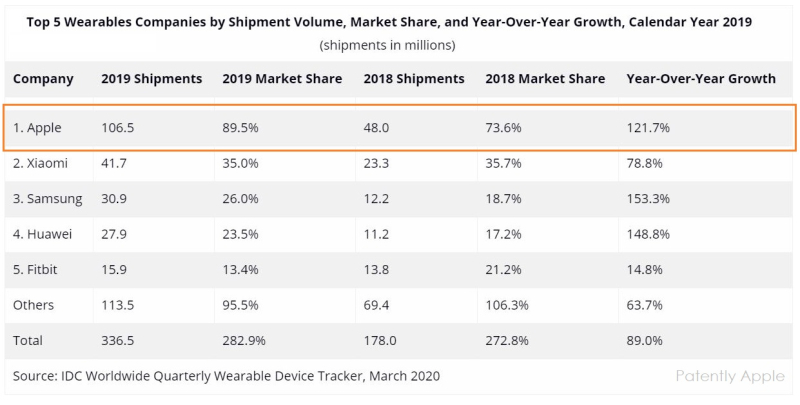 Other popular categories that also experienced growth during the quarter included watches (15.3% year-over-year growth) and wrist bands (17.7% growth). Wrist-worn devices captured 43.8% of the total market, down from 68.6% last holiday season.

Though the share for wrist-worn devices has declined, the category itself grew 16.3% over the same period. For the entire year, vendors shipped a total of 336.5 million wearable devices worldwide, resulting in an 89.0% increase from the 178.0 million units shipped in 2018.

Earwear continued its strong march forward with 170.5 million units shipped worldwide for the year, resulting in an eye-popping 250.5% improvement from the 48.6 million units shipped in 2018. While the focus of hearables is on the audio experience, including rich quality audio and noise cancellation, the list of devices including other features, such as coaching, language translation, and smart assistants, underscore additional use cases beyond audio.

Wristbands finished 2019 with 69.4 million units shipped worldwide, up 37.4% from the 50.5 million units shipped in 2018. This is a notable improvement over the flat volumes hovering near 48 million units over the past several years. While the latest trend has been for wristbands to mimic smartwatches with notifications and messages, most of the volume came from simple step counters and heart rate trackers.

Watches reached 92.4 million units shipped in 2019, up 22.7% from the 75.3 million units shipped in 2018. Here, Apple finished the year much in the same way it began the year – as the undisputed leader in the smartwatch market with 28.5% market share. This is the first time Apple's annual market share dipped below forty percent as companies like Huawei, Samsung, and multiple smaller vendors gained ground.

Xiaomi ran a distant second behind Apple selling cheap, almost toy-like products. For instance, the Xiaomi Mi band 4 Wristband sells for just $36.99. Apple is number one and is doing so by selling higher end products with decent margins.