Apple loses Appeal to invalidate a Caltech Patent and is ordered to pay the $US1.1 Billion verdict

Patently Apple posted a report back in late May 2016 titled "The California Institute of Technology Sues Apple over Wi-Fi Technology." The lawsuit was against both Apple and Broadcom (really Avago owned by Broadcom). The patent infringement lawsuit concerns Apple's iPhones beginning with the iPhone 5, the iPad, MacBook Air, Apple Watch and more. Apple's use of Broadcom's technology is using IRA/LDPC encoders and/or decoders invented by the California Institute of Technology. The patents used against Apple were granted patents 7,116, 710, 7,421,032, 7,916,781 and 8,284,833. 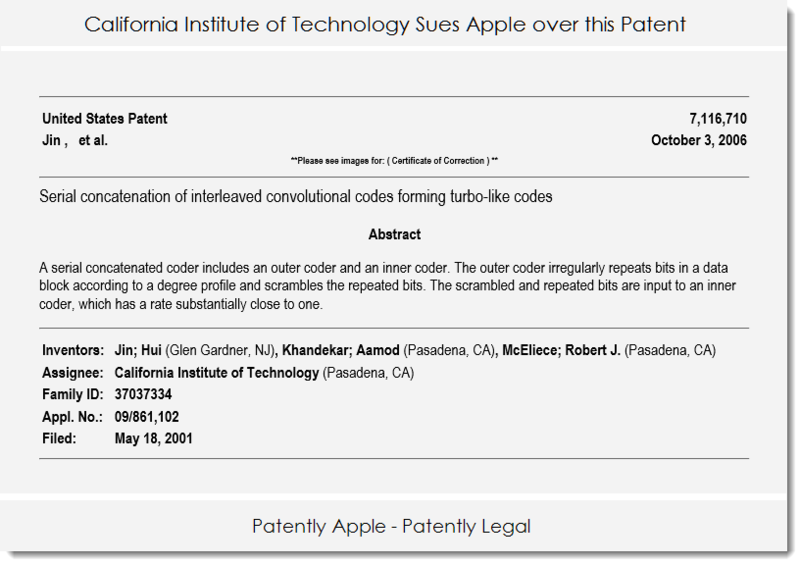 In January 2019 we posted a second report on this lawsuit titled "A California Jury orders Apple to Pay Caltech $838 million for Patent Infringement." At the time Apple and Broadcom were ordered to pay Caltech US$1.1 Billion for patent infringement.

Apple said it planned to appeal the verdict. In addition, Apple and Broadcom denied infringing the patents, and said the school wasn’t entitled to significant damages even if they were using the inventions.

The report noted that "A federal appeals court on Thursday declined to rule invalid one of the patents underlying a $1.1 billion verdict the California Institute of Technology won against Apple Inc and Broadcom Inc.

The U.S. Court of Appeals for the Federal Circuit affirmed a decision by an administrative patent court that upheld the validity of a Caltech patent challenged by Apple on obviousness grounds."

In reality, the verdict was handed down late last week. Apple, as always, stated that they would appeal the verdict.